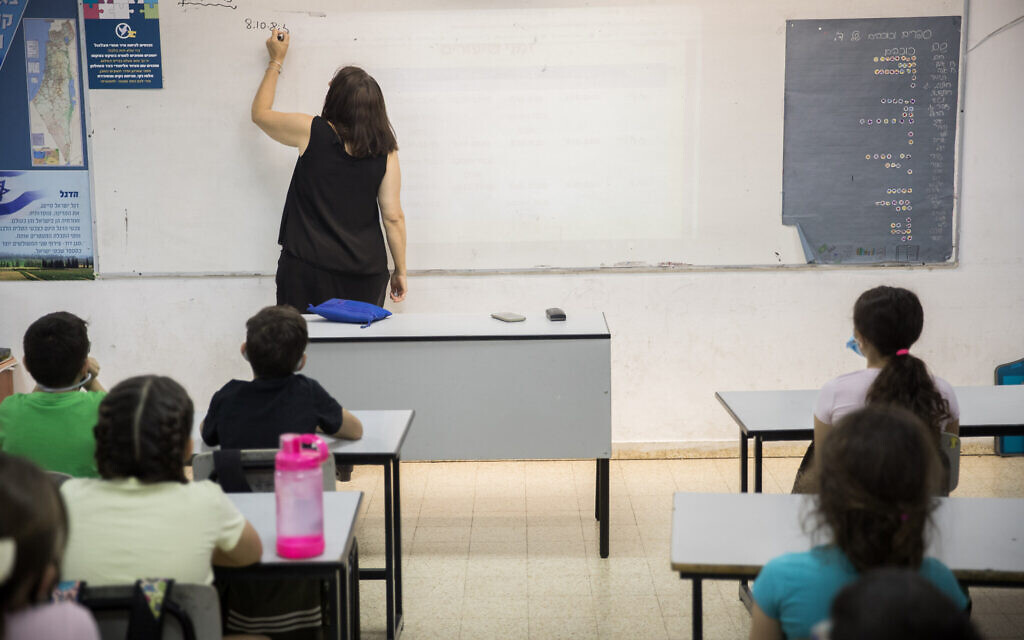 Many additional school students were told Tuesday to go into quarantine for 14 days — adding to a large number previously instructed to do so — including almost 2,000 pupils at a Beersheba high school where a girl was diagnosed with the coronavirus, as the Health Ministry announced two more deaths from the illness.

All 1,930 students at the Makif Vav school will stay in isolation until the Health Ministry concludes an epidemiological investigation and issues further instructions.

Additionally, an unspecified number of students at the Nave BaMidbar elementary school in the city have been asked to enter quarantine after a teacher contracted COVID-19.

Another carrier was diagnosed at Makif Gutvirt Klali High School in Sderot, sending almost 1,000 students and staff into isolation.

In Maale Adumim, a settlement near Jerusalem, a teacher at AMIT Wasserman high school for girls was confirmed to have the virus, prompting the municipality to order the school closed and send all pupils and staff to quarantine and to undergo a coronavirus test.

In the HaKfar HaYarok youth village near Tel Aviv, all the 11th-graders stayed home from school Tuesday after a student displayed symptoms. His test results are not yet available.

The renewed outbreak, which began last week, is focused on education institutions, particularly the Gymnasia Rehavia high school in Jerusalem, where 159 students and staff members were found to be infected.

The Education Ministry said Tuesday afternoon that 9,935 student and education staff members were in quarantine and that a total of 31 institutions had temporarily closed down over the past week.

It said that a total of 217 people had been confirmed to be infected in schools and kindergartens.

The Health Ministry on Tuesday reported two new coronavirus deaths, after several days with no fatalities, bringing the toll to 287.

Meanwhile, the number of cases continued its upward trend, with 50 new cases identified since Monday evening and 113 in the previous 24 hours.

Of them, 31 were in serious condition, with 30 on a ventilator. Forty were in moderate condition, and the rest were displaying mild or no symptoms.

After several weeks of no more than 50 daily infections, Friday saw a significant jump of 115 new coronavirus infections over 24 hours, the first time that the 100 mark was breached since May 2. Saturday saw another jump, in what health officials attributed to public complacency and failure to heed social distancing rules.

A growing number of parents have been avoiding sending their kids to school as a result of the wave of infections. Some schools have independently implemented a scrapped system of keeping students in separate, smaller groups that stay away from each other to limit any potential wave of infections, Hebrew media reports said.

Education Minister Yoav Gallant said Monday that any institution where a COVID-19 case is confirmed will be closed immediately, though partial openings will be considered if there are separate buildings in the same institution.

Ran Erez, chairman of the Secondary School Teachers Association, told 103FM Radio he has demanded that the government move to halt physical studies at school and resume online courses.

Medical services have thus far largely limited testing to those displaying symptoms of the virus and have resisted calls to conduct mass testing to detect suspected asymptomatic carriers.

As he unveiled the looser criteria for testing, Edelstein stressed that even those who test negative must remain in 14-day quarantine if exposed to a virus patient or displaying symptoms of COVID-19.

On Monday, Channel 12 said Edelstein had barred all the senior officials in the Health Ministry from giving media interviews, since some of them oppose Edelstein’s move to allow testing of asymptomatic people. He wanted to prevent contradictory statements being made by different ministry officials, the report said.

Israel has taken steps in recent weeks to roll back its virus restrictions, reopening schools, synagogues, malls, restaurants and other spaces. While social distancing and hygiene guidelines remain in place, many have taken a more relaxed attitude as the virus appeared to wane, including regarding instructions to wear masks in most settings outside the home.