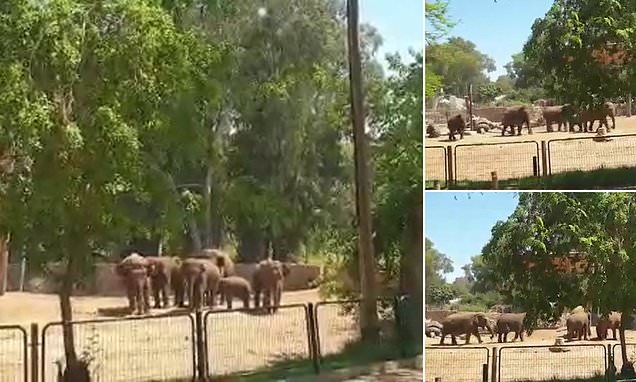 Elephants at Israeli zoo huddle together to shield calf from rockets

By Charlotte Mitchell For Mailonline and Ap

As air-raid alarms wailed overhead, a group of female elephants in an Israeli zoo huddled together to shield a calf from danger.

Footage of the remarkable moment shows five adult elephants moving to make a protective circle around one-year-old calf Pele as the sirens began to wail, holding the formation as blasts can be heard in the background.

The video was posted to social media by Ramat Gan Safari in Tel Aviv on Friday, amid a flare up in tensions between Israel and Hamas that resulted in the deaths of at least 248 Palestinians, and 12 people in Israel.

The caring behaviour seen in the video is ‘very normal’ for elephants in the wild, zookeeper Guy Kfir explained,  albeit in response to very different threats.

‘When they sense danger, they gather their young in the centre, encircle them and act as some sort of protective shield. In the video, you can see that each of them faces a different direction to protect the calf and watch out for any incoming danger,’ he told ynetnews.

‘We also observe this behaviour when sirens go off on memorial days. This also happens when one of them gives birth. All her fellow females circle her, serving as her eyes and shield.’

The video of the elephants came amid an 11-day conflict between Israel and Hamas, the militant and political group that governs Gaza.

It has left behind immense ruin in Gaza, including hundreds of homes that have been completely destroyed and many more that were badly damaged, according to the UN.

Fighting came to a fragile halt on Friday, when a ceasefire was agreed following pressure from the United States and others.

Tensions remain high, however, with Israeli police escorting more than 250 Jewish visitors on Sunday to a flashpoint holy site in Jerusalem where clashes between police and Palestinian protesters helped spark the most recent conflict.

Police cleared young Palestinians out of the Al-Aqsa Mosque compound and barred entry to Muslims under the age of 45, according to the Islamic Waqf, which oversees the site.

Muslims who entered were required to leave their IDs with police at the entrance. It said six Palestinians were detained, with four later released.

Israeli police denied there was any age restriction and said they had arrested five people who ‘violated the public order.’

Police spokesman Micky Rosenfeld said the site was open for ‘regular visits’ and that police had secured the area. The visits later ended without any further incident.

There were brief scuffles between Israeli police and Palestinian protesters after Friday prayers in an early test for the truce, which had taken effect hours earlier.

The ceasefire in Gaza was held, but there are fears that violence in Jerusalem could set off another cycle of escalation.

The Waqf said Sunday was the first time Jews had been allowed to visit the Al-Aqsa compound since May 4, a week before fighting broke out.

The Al-Aqsa Mosque, located inside the compound, is the third holiest site in Islam. It sits on a sprawling hilltop in Jerusalem’s Old City that is revered by Jews as their holiest site.

The site has often been the scene of violence over the years and was the epicenter of the 2000 Palestinian Intifada, or uprising.

Israeli police repeatedly clashed with Palestinian protesters at the site in the days leading up to May 10, when Hamas fired long-range rockets at Jerusalem, saying it was protecting the city in the wake of the skirmishes.

The threatened eviction of dozens of Palestinian families from the nearby Sheikh Jarrah neighbourhood was cited as another major trigger of the war.

In recent years, increasing numbers of religious and nationalist Jews have visited the Al-Aqsa compound. Palestinians fear Israel plans to eventually take over the compound or partition it.

The Israeli government has repeatedly said it has no intention of changing the status quo, in which the Waqf oversees the site under Jordanian custodianship.

On Sunday, Jordan said it would pay for repairs to Jerusalem’s Al-Aqsa Mosque, as well as medical aid for Palestinians, including a coronavirus testing and vaccination centre in the Gaza Strip. The statement from the Royal Court did not specify the amount of funding.