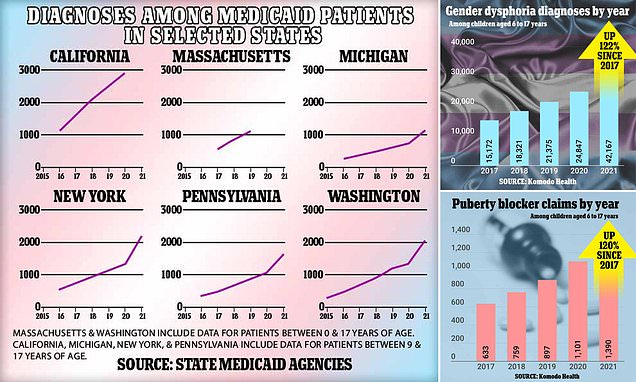 American children have seen an explosion of gender dysphoria with cases more than doubling in recent years.

Prescriptions for puberty-blocking drugs among under-18s doubled between 2017 and 2021, while scripts for hormone therapies have seen a similar rise.

Patrick Brown, a fellow at the Washington, DC-based Ethics and Public Policy Center, told DailyMail.com the data matches the perception many have that there are an increased number of children receiving this type of care.

The data – based on reports from health insurers – come as studies show the number of ‘top’ surgeries being carried out on children has risen 13-fold in the last decade.

Debate about whether there should be restrictions on child gender care have intensified in recent months as an increasing number of former patients who regret having the irreversible procedure come forward and claim they were not challenged enough as children.

Published in Health News, Political News, Statistics and US News