As Establishment Media Tries To Destroy America, Independent Media Has Never Been So Important To The Republic

With the media already doing a bang-up job of kissing Joe Biden’s butt on day one of his occupying the White House, and making it very clear they intend to spend the next four years doing so, we note yet another polling organization sounding the alarm regarding the lack of trust Americans have for the liberal establishment media, aka the MSM.

As most already know, different polling organizations often come up with different percentages, dependent on a variety of factors. The way questions are phrased, the demographic breakdown of the respondents, and the method of getting responses, (landlines, cell or internet), etc..

That doesn’t make polling worthless, because looking at the trends and patterns seen in multiple polls from different polling groups, can tell us quite a bit.

For example: A look at Gallup’s polling, dating all the way back to the 1970’s shows trust in media has dwindled considerably, as the graphic below shows. 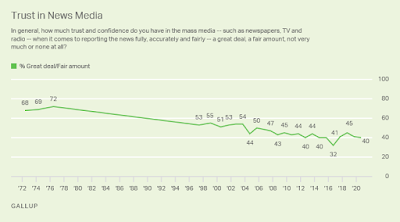 Only 9% have a ”great deal” of trust while 31% have a ”fair amount,” according to the Gallup poll, which first asked the question in 1972 and has been querying the public annually since 1997.

When asked to quantify how much ”trust and confidence” they had in mass media, 33% had ”none at all,” a record in the 48 years of the poll and four points higher than the previous low-water mark in 2017. Another 27% had ”not very much.”

Republicans were the least trustful of news media, with only 10% expressing a great deal or fair amount, 5% lower than last year, and independents at 36%, the same as last year.

However, 73% of Democrats expressed a great deal or fair amount of trust, just 3% off their previous high in 2018.

The trust in media question has not only been tracked by Gallup, but according to a recent report over at the leftwing Axios, we see that other polling organizations are showing the same trends and patterns.

As was pointed out earlier, the numbers and percentages are different, but the pattern remains the same.

Data from Edelman’s annual trust barometer shared exclusively with Axios, “Trust in traditional media has declined to an all-time low.”

Of course, Axios, being a leftwing “news” outlet, claims that the media is “determined to do something about it.”

Stop laughing!!!!!!! Ok, so it is a little funny that they could write that and not be struck down by lightening for lying their tails off.

Here are the numbers, and most importantly the trend from that polling.

By the numbers: For the first time ever, fewer than half of all Americans have trust in traditional media, according to data from Edelman’s annual trust barometer shared exclusively with Axios. Trust in social media has hit an all-time low of 27%.

• 56% of Americans agree with the statement that “Journalists and reporters are purposely trying to mislead people by saying things they know are false or gross exaggerations.”

• 58% think that “most news organizations are more concerned with supporting an ideology or political position than with informing the public.”

• When Edelman re-polled Americans after the election, the figures had deteriorated even further, with 57% of Democrats trusting the media and only 18% of Republicans.

A million words can be written and not make the point as well as the graph below: 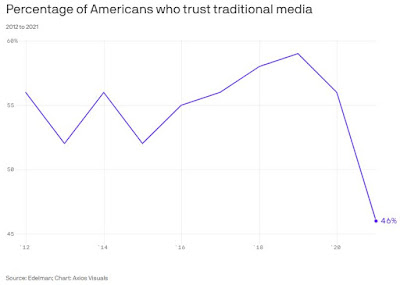 The only people that “trust” the media are Democrats, with Republicans and Independents showing a minute amount of trust in the media, at best.

This makes perfect sense since the demographic breakdown in the media is over 90% liberal, with very few conservative voices with large audiences.

It should be no surprise that liberals like news organizations that push liberal candidates, liberal agendas, and liberal lies.

INDEPENDENT MEDIA IS MORE IMPORTANT THAN EVER

The difference is that Independent Media makes it very clear, instead of doing what establishment media does by falsely claiming they are “unbiased,” and “non-partisan.”

Just as with the liberal media, the bias is shown in a number of ways, including but not limited to; The stories chosen to report on; the commentary regarding the chosen topic; the “balance” between news and opinion, etc…

In September 2020, Gallup/Knight Foundations found that 86% of the public said the media shows bias.  The breakdown on those numbers were “49% of respondents saying that there is “a great deal” of political bias in news coverage and 37% saying there is “a fair amount” of bias.”

In August 2020, 84% of Americans say media to blame for US political divide.

No matter what organization is polling, whether it leans conservative or liberal, the resulting trends and patterns are the same…. dwindling trust in a media that can no longer convince Americans they are reporting in an unbiased manner.

The media has already made it crystal clear they intend to protect Biden, push his liberal agenda, and attack anyone doing actual “reporting,” while trying to get conservative media banned, silenced and censored, as CNN recently discussed pressuring cable providers from carrying NewsMax TV and One American News Network.

With trust in the media at an all time low, and still dropping, it is important that Independent Media not only cover the news the establishment media won’t but even more critical, to cover it truthfully.

We cannot offer unverified or unconfirmed reports without making it clear they are “claims” but not confirmed. We cannot “report” on things readers want to see if we know they are not based in facts.

The bottom line is: We cannot become what the establishment media is now.