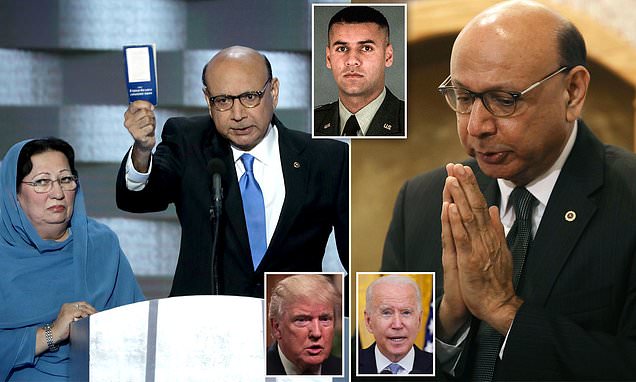 Trump critic and target of the former president's mockery, Khizr Khan was officially nominated for a…

Joe Biden has appointed the Muslim father of a Gold Star veteran whose son died while fighting in Iraq, and who was later mocked by Donald Trump, to a religious freedom post within his administration.

Trump critic and target of the former president’s mockery, Khizr Khan was officially nominated as the Commissioner of the United States Commission on International Religious Freedom on Friday.

The 71-year-old founder of the Constitution Literacy and National Unity Project is father to the late United States Army officer Humayun Khan, who was killed by a car bomb in 2004 in Iraq at the age of 27.

Khan became an unlikely thorn in Trump’s side following a riveting speech and appearance at the July 2016 Democratic National Convention in Philadelphia.

Khan, who was joined by his wife Ghazala on stage, stated that his late son would not even have been able to live in America or die a hero in the armed forces if it had been up to Trump, who had previously voiced his support for banning Muslims from entering the country.

Trump then ridiculed and dismissed Khan while claiming he had to deliver the whole speech himself, because as a Muslim woman, his wife was not ‘allowed’ to speak, according to a 2016 report by the New York Times.

‘If you look at his wife, she was standing there, she had nothing to say, she probably — maybe she wasn’t allowed to have anything to say, you tell me,’ Trump told ABC News shortly after Khan’s DNC speech.

Khan later criticized the then-Republican presidential nominee as sacrificing ‘nothing and no-one’ for his country before adding the Trump was devoid of ‘feeling the pain of a mother who has sacrificed her son.’

Trump’s dig at Khan saw his critics claim the condemnation made him unfit to be president, and saw them insist that he had no respect for American servicemen and women.

But the argument – and later revelation of the infamous Access Hollywood tape which saw Trump advise on grabbing women ‘by the p*ssy’ failed to derail his campaign, and he was ultimately elected president in November 2016.

Khan’s appointment saw him lauded as an ‘an advocate for religious freedom as a core element of human dignity.’ by the White House.

The announcement said that Khan ‘devotes a substantial amount of his time to providing legal services to veterans, men and women serving in uniform, and their families.’

‘Today’s announcement underscores the President’s commitment to build an Administration that looks like America and reflects people of all faiths.’

After winning the presidency, Trump eventually signed a bill into law naming a Virginia post office after the late US Army Captain.