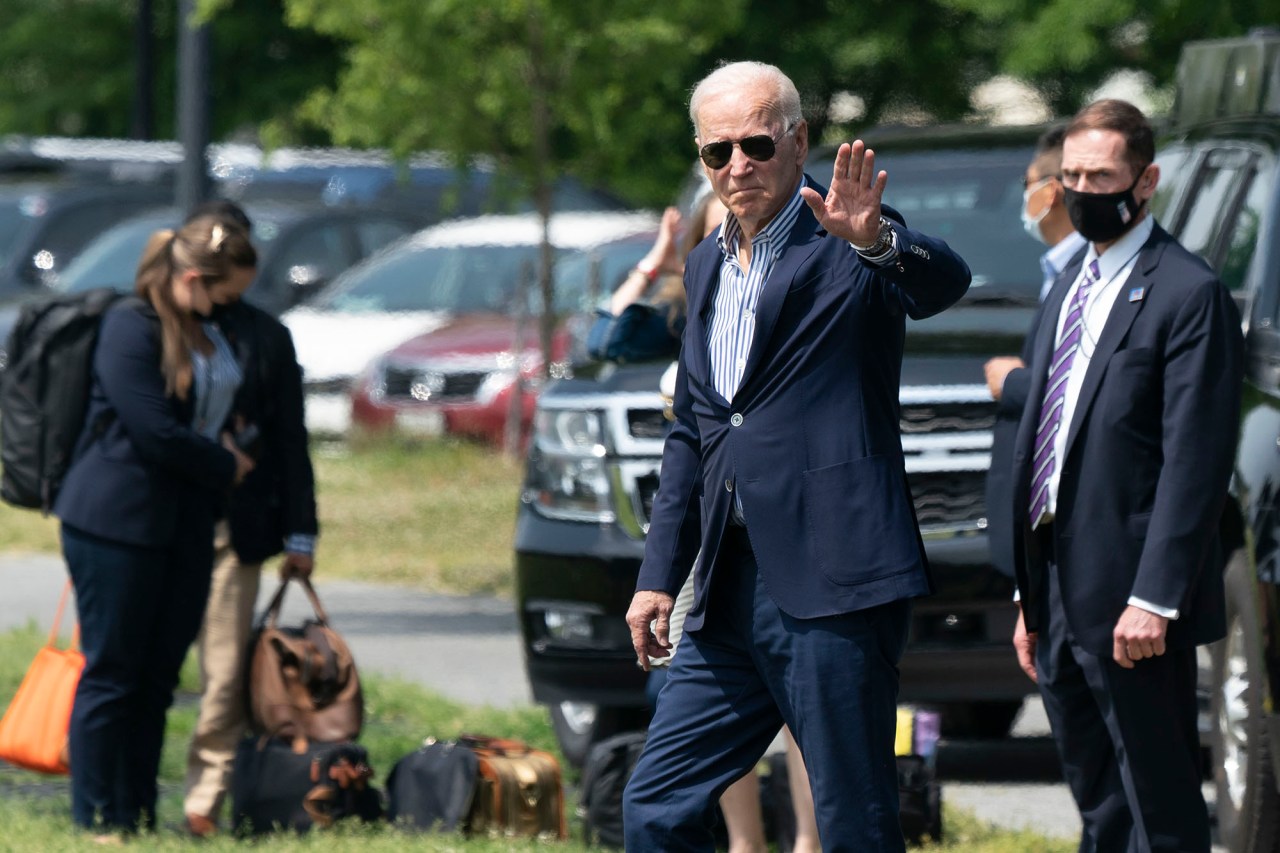 DAILY MAVERICK 168: Biden will have to balance US’s traditional support of Israel with modern global sentiment

The US’s steadfast support of Israel may be starting to waver. So, what happens next?

The US’s steadfast support of Israel may be starting to waver. So, what happens next?

At least as far as this writing, the Israeli-Hamas ceasefire continues to hold, and US Secretary of State Tony Blinken’s visit to the region may help inch things along. Maybe. But no big splashes yet.

By the time readers see this article, Blinken will have completed his first round-robin consultations in the Middle East in his new job – visiting Jerusalem, Cairo, Amman, and Ramallah. Unlike in the previous administration, Riyadh, Saudi Arabia, which was the previous president’s first overseas trip, the Saudis were not on Blinken’s itinerary.

So far at least, there is some real reluctance on the part of this president to allow his administration to become overwhelmed by yet another potentially fruitless chase for the dazzling unicorn of a comprehensive Middle East peace.

But, simultaneously, what the recent violence and death in the region has also made clear is the continuing, central importance for a US presence – something all of the parties seem to agree on – in any processes and progress that leads away from hostilities, despite President Joe Biden’s reluctance to go too fast, too far, too deep.

There is obviously a tension between these two concepts. But, as The Economist’s “Lexington” noted, Biden’s approach “will not be, as some progressives claim, by ditching the Palestinians as Mr Trump did. In the first weeks of his presidency Mr Biden restored $250m of aid to them that his predecessor had cut, promised to reopen the de facto American consulate for Palestinians in Jerusalem that Mr Trump had closed and restated his support for a Palestinian state, on which the Republican president was ambivalent. Yet Mr Biden shares the consensus view that no resolution is possible under today’s Israeli and Palestinian leadership. And as he previously signaled in Afghanistan, he has little time for a losing cause.”

Still, in its calculations about its future role and intermediate objectives, the Biden administration now must factor in a recalibrated understanding of the changes in some segments of his party – and in the larger society – regarding the longstanding relationship between Israel and the US. It will be important for the Biden administration in its own expectations to stay on the right side of the changing regional, American, and global expectations game, even as it maintains the country’s traditional support for Israel.

In the Biden administration, the president remains central for decisions to be made about the American role in the Middle East. But, unlike his recent predecessors, Biden entered office with decades of experience in US foreign affairs generally, in the issues of the region more specifically, and in knowing many of the personalities in the mix. This derives from his more than three decades in the Senate, including time on or chairing the Senate Foreign Relations Committee, visiting the region repeatedly, and serving as vice-president for two terms.

Biden has frequently said he has known Benjamin Netanyahu for many years, and while he likes him personally, does not agree with many of the things he has said or done. Given that Netanyahu has been prime minister for over a decade, and was a public figure for years before that (and knows the US rather well, having attended high school outside Philadelphia and university at MIT, worked as a management consultant, and served as a diplomat in the US), even absent a meeting of the minds between the two national leaders, by now there must be mutual clarity about what they each think about things. There must be few surprises left undiscovered in that relationship.

The Biden senior policy team has, in most cases, worked together for years in various foreign policy positions. As he has said repeatedly, Blinken has family who were Holocaust survivors and several who served as American ambassadors.

Blinken has been at Biden’s side for many years, most especially during the Obama administration. Blinken previously was deputy national security adviser and deputy secretary of state in the Obama years and during the Clinton era, and served in various state department and national security council positions. Earlier, he had been the senior staff member for the Democrats on the Senate Foreign Relations Committee when Biden was a senator.

He was also a foreign policy adviser in Biden’s unsuccessful 2008 presidential campaign, before joining the Obama-Biden presidential transition team.

Meanwhile, like Blinken, national security adviser Jake Sullivan has also been closely associated with Biden, Barack Obama, and Hillary Clinton. He was an adviser in Hillary Clinton’s 2016 presidential campaign and then her deputy chief of staff at the Department of State. Sullivan was also in the Obama administration as a deputy assistant to the president and as then vice-president Biden’s national security adviser.

The state department is structured with geographically defined divisions and various thematic bureaus, which are headed by assistant secretaries of state. These are presidential nominations confirmed by the Senate. In the case of the Near East, the new assistant secretary has yet to be confirmed by the Senate, but the nominee is Barbara Leaf, currently the National Security Council’s (NSC’s) staff director for the Near East. She was previously American ambassador to the United Arab Emirates (UAE).

At the NSC, Leaf is to be replaced by Brett McGurk. His resumé includes national security positions under George W Bush, Barack Obama and Donald Trump, including special presidential envoy for the global coalition to counter Islamic State in the Levant.

For years, for a wide range of reasons, support for Israel has been a default ‘given’ in American politics – most especially the sense that Israel was the only democratic state in the region and a reliable friend.

(Regarding Leaf’s recent experience in the region, the UAE, of course, is now tied to Israel diplomatically by one of the “Abraham Accords”, signed towards the end of the previous president’s term. UAE actions in the Near East have often been in step with those of the US and Saudi Arabia, such as in both nations’ orientation towards Iran.)

As with other geographic bureaus, there are several deputy assistant secretaries of state dealing with the Near East. Currently, the deputy assistant secretary most specifically focused on Israel/Palestine issues is Hady Amr. (His father was Lebanese, where he was born, his mother was Jewish, and he spent time as a youngster in Saudi Arabia.) Amr is a veteran of the policy studies world, including time as co-founder and head of the Brookings Institution’s Doha Studies Center. Brookings is a highly regarded US think tank, although its Doha Center has sometimes been seen as especially responsive to political waves emanating from Qatar. Qatar is linked diplomatically to Iran, and Qatar, along with Iran, has been noted for ties to Hamas in Gaza – including financial ones.

On the face of it, Amr might be seen as an unusual individual for this key position, given some earlier enthusiasms for the Intifada. He is reported to have said, back in 2002, “I was inspired by the Palestinian intifada.”

Meetings in the upper tiers of the US government that would include Amr, together with Sullivan, Leaf or others as they sort out the next steps for America in dealing with Israel and Palestine will certainly not be boring. (Oh, to be a fly on the wall in those conference rooms.) But, having Amr in there may be very useful, given his perspectives not universally held among American senior officials, but whose experience and contacts will prove invaluable. Contemplating his impact more broadly, as one Israeli foreign policy veteran explained, Amr is “very experienced. He knows everyone; [but he is] not our ‘friend’.” But, perhaps, not being seen as Israel’s “friend” may be key.

Unlike the previous administration’s ultra-partisan, pro-Israel posture – as in moving the American Embassy to Jerusalem, closing the consulate there that dealt directly with the Palestinian Authority, launching a shambolic investment conference for the West Bank, and volubly supporting additional Israeli settlements on the West Bank – the Biden administration may actually desire having experienced figures around who know everybody as they try to sort out their stance, going forward.

The Biden administration still does not have a confirmed ambassador in Jerusalem, although Thomas Nides, another veteran senior official from the Obama years, is about to be formally nominated. Nides’ views will likely conform closely with others in the Biden team. The senior diplomat named to head the consulate in Jerusalem (or Ramallah, perhaps) dealing with the Palestinian Authority will be an important choice as well.

The most recent hostilities, however, are affecting the circumstances of, and enthusiasm for, support for Israel in ways that may now be encouraging the Biden administration to think carefully how it shapes its policies going forward.

For years, for a wide range of reasons, support for Israel has been a default “given” in American politics – most especially the sense that Israel was the only democratic state in the region and a reliable friend.

But until the Trump administration, it had largely been a bipartisan understanding, save for a few outlier politicians. One thing the Trump administration’s efforts did, however, was to turn unwavering support for Israel into an increasingly partisan, wedge issue in American political life. While support remains an article of faith for most elected Republicans (significantly due to that traditional loyalty), because Republican candidates now depend heavily on evangelical, fundamentalist voters supportive of Israel on theological grounds. Meanwhile, the Democratic Party’s circumstances are in flux.

A growing number of individuals – often connected to other causes such as Black Lives Matter – are increasingly engaged in protests and advocacy against Israel and for Palestinian rights. Such advocacy has gathered steam and encouraged protest rallies in the US and elsewhere in the wake of the video footage from Israeli air strikes in Gaza.

Moreover, a group of Democratic members of Congress such as Alexandria Ocasio-Cortez of New York, Ilhan Omar of Minnesota, Ayanna Pressley of Massachusetts, and Rashida Tlaib of Michigan, are increasingly tying Israeli actions in Gaza, in Jerusalem, and on the West Bank to a larger range of domestic and international policies.

Meanwhile, a number of senators and representatives – led by Vermont senator Bernie Sanders – are opposing the latest proposed sale of US military equipment to Israel, unless that nation agrees to major policy changes towards Gaza and the West Bank. Although that budget measure is unlikely to come to fruition, the Biden administration must take cognizance of the way this breeze is blowing – and even how it might affect other Biden initiatives in Congress.

In the larger US political landscape, there are pressures for changes in America’s approaches. During Blinken’s trip, no grand plan was unveiled. Instead, he stressed Israel’s right to defend itself, but also underscored the need to keep the ceasefire going and to build momentum for future progress. He encouraged arrangements for humanitarian relief aid (and announced additional US aid) to the people in Gaza and encouraged plans for additional international economic aid, but that it be through the Palestinian Authority instead of Hamas, even though the latter holds power in Gaza. In Cairo, he expressed appreciation to the Egyptians in helping to broker the ceasefire.