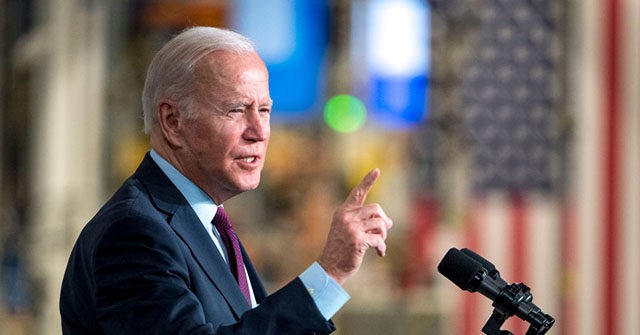 President Biden’s plan offers access to free preschool for all 3- and 4-year old children, providing parents access to high-quality programs in the setting of their choice, from schools to child care providers and community-based organizations to Head Start.

A report at the New York Times, however, observed the concerns of faith-based groups that provide early childhood care, as it noted the bill’s “nondiscrimination provision” could “disqualify some religious organizations, which provide more than half of child care programs in the United States.”

According to a national poll conducted in December 2020 by the Bipartisan Policy Center, 53 percent of working-parent households used a childcare program affiliated with a faith organization.

But the House’s approval of the bill sparked strong resistance to its promise of federal dollars in exchange for teaching children radical leftwing curriculum disguised as “equity” and “nondiscrimination.”

Centers run by the Catholic Church and large Orthodox Jewish groups, for example, say, if the bill becomes law, they will be forced to choose between accepting federal childcare dollars and continuing to teach the tenets of their respective faiths and hiring staff who adhere to their faith beliefs as well.

“It will be detrimental to our ability to participate,” Jennifer Daniels, the associate director for public policy at the United States Conference of Catholic Bishops (USCCB), said, reported the Times. “It would impact our ability to stick with our Catholic mission in a variety of ways. We’ve worked really hard to make our concerns known.”

In a letter to Congress in advance of the House’s vote on the bill, the USCCB observed:

[W]e are concerned by several provisions in the Build Back Better Act that do not align with the principles we outlined with respect to preserving religious liberty and expanding access to early childhood education. Specifically, while expanded access to early child care and pre-k would be beneficial for many working families, we are concerned that the current provisions to do so – in a departure from the approach in existing federal programs – explicitly make providers recipients of federal financial assistance and attach new and troubling compliance obligations. This will effectively exclude many faith-based providers from participation (or in some already existing state-based programs, continued participation), thereby severely limiting options for families, and suppressing a mixed delivery system.

As Christian Headlines pointed out, Dr. Albert Mohler, president of the Southern Baptist Theological Seminary, expressed his concerns about how the Build Back Better social spending measure represents a “change” in “the rules.”

“The most substantive change might not have been recognized at first,” he wrote, adding:

It’s a change from funding these programs through block grants given to the states to changing the situation to direct funding by federal programs. Now, here’s the big difference. There had been organizations, even ministries, Christian organizations that had participated in those programs funding by the block grants. That meant that they did not come directly under the non-discrimination provisions required by the federal government. But the change proposed here is not accidental.

It’s very intentional. It’s an intentional effort, and it’s being demanded by some on the political left, an intentional effort to bring all of these programs under the moral revolution mandated by the federal government. And that means that religious institutions and religious organizations would not be able to operate these schools in a way consistent with their own beliefs, especially when it comes to the gender and sexual morality revolution, the entire array of issues, most importantly summarized as LGBTQ.

The Times reported these concerns have been noted by Sen. Joe Manchin (D-WV), who has told Democrats faith-based childhood programs must be assured they can fully participate in the program.

But Democrat leaders in the House, such as the Congressional Black Caucus and Education and Labor Committee chairman Rep. Bobby Scott (VA), said no federal dollars should go to any religious group that “discriminates,” according to their definition of the term.

“The Build Back Better Act must not allow government-funded discrimination — in employment or in the provision of services to participants — in publicly funded programs,” Scott and Rep. Joyce Beatty (D-OH), chairwoman of the Black Caucus, wrote to Speaker Nancy Pelosi (D-CA).

“We believe that allowing such discrimination financed with public funds collected from all taxpayers is wrong,” the Democrats wrote. “We are asking you to oppose any effort to remove or change the nondiscrimination provisions included in the child care and universal preschool provisions of the Build Back Better Act.”

Upon the House’s approval of the bill, Alliance Defending Freedom Senior Counsel Zack Pruitt observed the vote shows “congressional Democrats once again made clear how aligned they are with the radical Left’s agenda.”

The bill not only requires taxpayers to fund abortion but also could “force faith-based childcare providers out of the system,” Pruitt warned, adding:

The bill … contains funding provisions and new grant programs that are likely to exclude many faith-based childcare providers while cutting funding to existing childcare programs currently being utilized by many faith-based providers which jeopardizes the freedom of parents to send their children to childcare programs that align with their religious beliefs. We urge the Senate to reject these dangerous provisions and instead vote in favor of policies that protect life, religious freedom, and the right of parents to direct the upbringing of their children.

Mohler further warned against indifference to the concerns of faith groups as the Senate considers the legislation which, essentially, would require “pushing everyone in the line with the new LGBTQ revolution.”

“You’re going to go there one way or another, and the funding is at stake,” he wrote. “It may be true that there would be many Christians who would say, ‘Well, this isn’t about me. It’s not about my interest. It’s not about my religious organization or favorite institution.’ But understand this, the coercive power of the state goes far beyond what is detailed in this kind of funding program.”