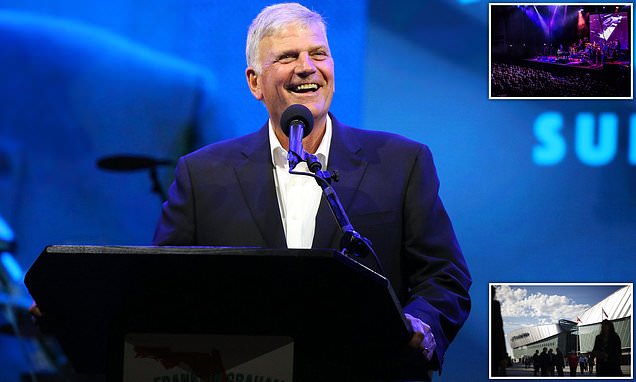 Franklin Graham, 67, a vocal supporter of US President, Donald Trump , describes homosexuality as…

The preacher son of US evangelist Billy Graham is threatening to sue eight British arenas that cancelled his shows after protests from the LGBT community.

Franklin Graham, 67, a vocal supporter of US President, Donald Trump, describes homosexuality as a ‘sin’ and is in favour of ‘gay conversion therapy’.

The ACC Liverpool conference centre was the first to cancel one of his planned events saying last month that his views were ‘incompatible’ with their values and the Sheffield Arena followed soon after.

Since then venues in Glasgow, Newcastle, Cardiff, Birmingham, Milton Keynes and London have all followed suit.

But Graham said today his lawyers were fighting back claiming the venues had breached contracts and had discriminated against him because of his religious beliefs.

He also remains unrepentant on his ‘homophobic’ views and even claimed that the Queen would agree with him.

Published in Crime, Faith & Religion News, Opinion and US News