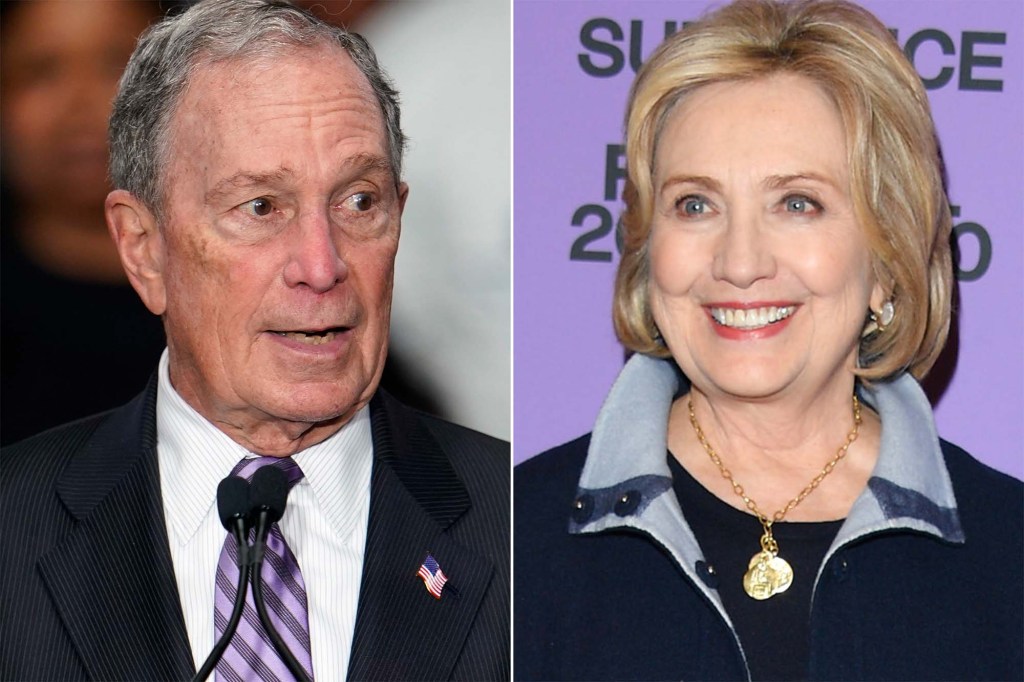 Bloomberg’s internal polling has found the combo “would be a formidable force,” campaign sources told…

Mike Bloomberg could team up with Hillary Clinton to try to take down President Trump in November — by making her his running mate.

Bloomberg’s internal polling found the combo “would be a formidable force,” sources close to the campaign told the Drudge Report Saturday.

Bloomberg’s communications director did not deny the rumored matchmaking effort.

“We are focused on the primary and the debate, not VP speculation,” Jason Schechter said in a statement.

But minutes after Drudge broke the news, Bloomberg himself posted a coy message about working with female colleagues.

“I would not be where I am today without the talented women around me,” he tweeted. “I’ve depended on their leadership, their advice and their contributions.”

A Bloomberg campaign insider told The Post that the two have long been simpatico – going back to the days when she represented New York in the U.S. Senate and he was Gotham’s mayor.

“I am sure that they polled it, just because you would be dumb not to wonder,” the insider said. “You want to see what a match-up might look like.”

But the pairing is a “net negative” for Bloomberg, a Democratic strategist said.

“It doesn’t make any sense to me,” said Brad Bannon, a consultant not affiliated with any presidential campaign.

“If he wins the nomination, there’s going to be a lot of unhappiness in the progressive wing of the party,” Bannon explained. “You can’t afford to have them sit on their hands in November.”

Clinton is anathema to progressive supporters of Sen. Bernie Sanders, who accuse her of underhanded tactics beating him to win the Democratic Party nomination in 2016.

One of his top surrogates, Rep. Rashida Tlaib (D-Mich.), led a chorus of anti-Clinton boos at a Sanders rally in Iowa last month.

Trump allies pounced on the rumor.

“Did anti-establishment Dems really think the establishment oligarchs in their party were just gonna roll over in the face of Bernie’s revolution?” Republican strategist Andy Surabian told the Daily Caller.

Sanders ignored the running-mate firestorm while campaigning Saturday, but did get in some veiled digs at Bloomberg. At a Las Vegas rally, he railed against “billionaires spending hundreds of millions of dollars trying to get elected.”

Asked about the looming Hill-Berg, Rep. Alexandria Ocasio-Cortez, who has endorsed Sanders, deflected.

“I would hope [Bloomberg] would not be in a position to be choosing a running mate at all,” she told The Post during her Queens campaign office opening Saturday.

“I think Bloomberg’s past on stop and frisk, on harassment of women— all of these claims are huge red flags.”

Clinton and Bloomberg were spotted together in December at Orso in the Theatre District, where they dined with daughter Chelsea, Barry Diller, Diane von Furstenberg, and others, Page Six reported – supposedly to celebrate the birthday of socialite Annette de la Renta.

“From what I have seen they have always been friendly,” the campaign insider said.

Clinton said last week that she would “probably” not accept an offer to run as another Democrat’s veep – which would be a demotion of sorts after serving as Secretary of State under President Obama and as her husband’s principal adviser and unofficial deputy during President Bill Clinton’s two terms.

But she wouldn’t rule it out.

“I never say never because I believe in serving my country,” she told talk show host Ellen DeGeneres. “But it’s never going to happen.”