Border Patrol Says 5,000 Migrants Were Under Texas Bridge on Sunday 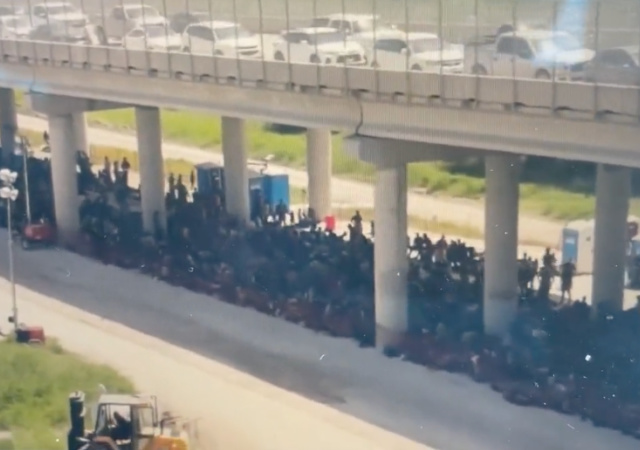 Border Patrol Says 5,000 Migrants Were Under Texas Bridge on Sunday

The update comes out on the same day HHS said officials apprehended 884 unaccompanied children on Thursday.

Remember this video from Bill Melugin at Fox News?

NEW: This is the largest group of migrants we’ve ever seen being held by Border Patrol under Anzalduas Bridge in Mission, TX. Looks like it could be up to 1,000 people. We can only get a look at the area with our drone. There’s a popular Rio Grande crossing area nearby. @FoxNews pic.twitter.com/AsAygsO966

A few Border Patrol agents told Melugin the video shows 4,000 migrants. But another one said 5,000.

UPDATE: Apparently I drastically undercounted the amount of migrants under this bridge on Sunday. Some Border Patrol agents reached out and told me it was well over 4,000 migrants. Just talked face to face w/ an agent who was there that day. He told me it was 5,000. @FoxNews https://t.co/gRMj0o9KjV

Then I saw a report about unaccompanied migrant children:

More than 800 unaccompanied migrant children were apprehended in a single day this week, as the numbers of migrants coming to the southern border continue to surge with no sign of slowing down despite the heat of the summer months.

Health and Human Services announced that 834 unaccompanied children and teenagers were apprehended on Thursday, significantly higher than the 30-day average of 512.

It means that there are a total 2,784 children in Customs and Border Protection (CBP) custody, and 14,523 in HHS custody. The Biden administration has focused on transferring children apprehended at the border from CBP to HHS custody and then to sponsors or parents already in the country – often illegally themselves. On Thursday, 612 children were discharged from HHS custody to parents or guardians.