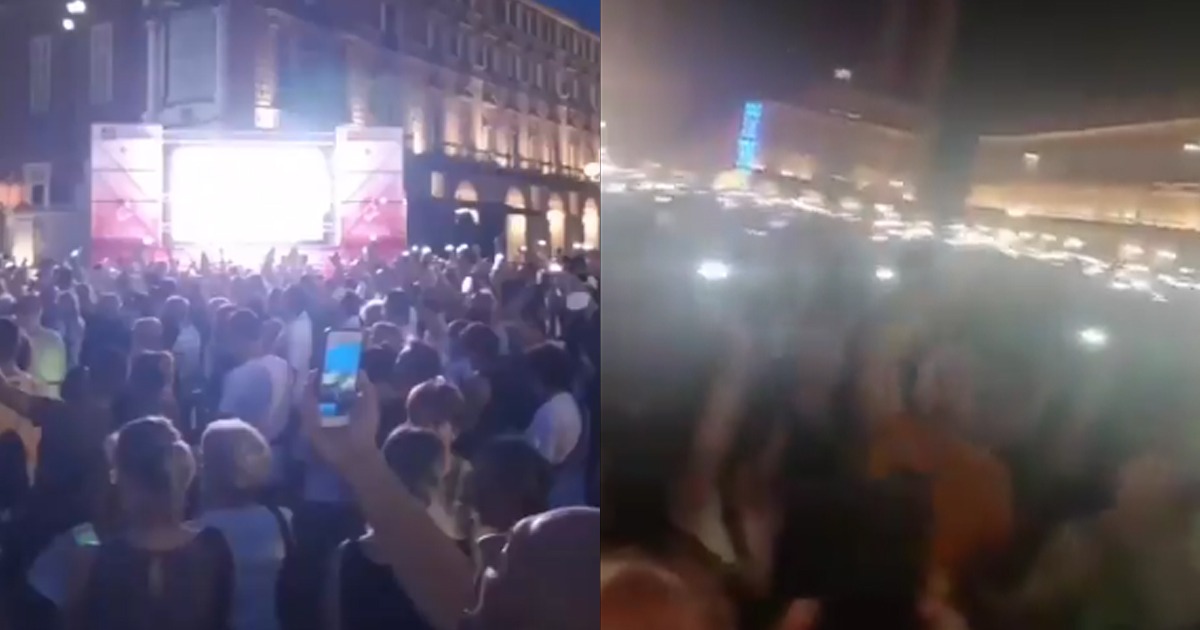 Thousands of Italians have taken to the streets chanting "No Green Pass!"

Thousands of Italians have taken to the streets chanting “No Green Pass!”

Earlier today Italy instituted its “green pass” vaccine passport system and, at the same time, severe restrictions on movement for Italians who opt not to receive one of the controversial vaccines, banning unvaccinated Italian citizens from entering stadiums, museums, theaters, cinemas, exhibition centers, swimming pools, and gyms unless they can provide government-approved paperwork allowing their entry. Now, a massive protest has started in Turin, Italy, the northern Italian city that is the capital of the Piedmont region.

An Italian street journalist writes that “Italians by the thousands gather at Turin tonight in Italy against the announcements of the Italian Prime Minister who has just announced the establishment of the #PasseSanitaire from August 5 #greenpass”. Another video, posted throughout social media, also shows the thousands of protesters gathered, chanting “No Green Pass!”

Italy joins the ranks of France and the United Kingdom in requiring citizens to present government-approved paperwork to access buildings and engage in commerce as part of a medical passport system allegedly designed to curb the spread of COVID-19. Ironically, citizens in these countries – and the United States – were bashed as conspiracy theorists in the early months of the pandemic for predicting this would occur.

As experts around the world continue to spread fear about the so-called Delta Variant of COVID-19, the same experts have acknowledged that the most common symptoms of the dreaded new strain of COVID-19 appear to be identical to “hay fever” or the common cold. As National File reported, “The new strain has reportedly been the cause of 99% of all new COVID-19 cases in the UK. ‘The main symptoms of COVID-19 appear to have changed — with headaches and sore throats now more common than fevers and coughs, according to a warning by UK experts,’ noted the New York Post.”

Additionally, “‘Allergy sufferers can experience some of the same symptoms as those with Covid, which can cause huge levels of anxiety,’ said Dr. Connor Bryant, co-founder of clean air tech MedicAir, according to Mirror. ‘COVID is acting differently now, it’s more like a cold,’ said Tim Spector, a professor of genetic epidemiology. ‘All those are not the old classic symptoms.’”