China Could Soon Use Nuclear Weapons to ‘Coerce’ the US, Experts Warn 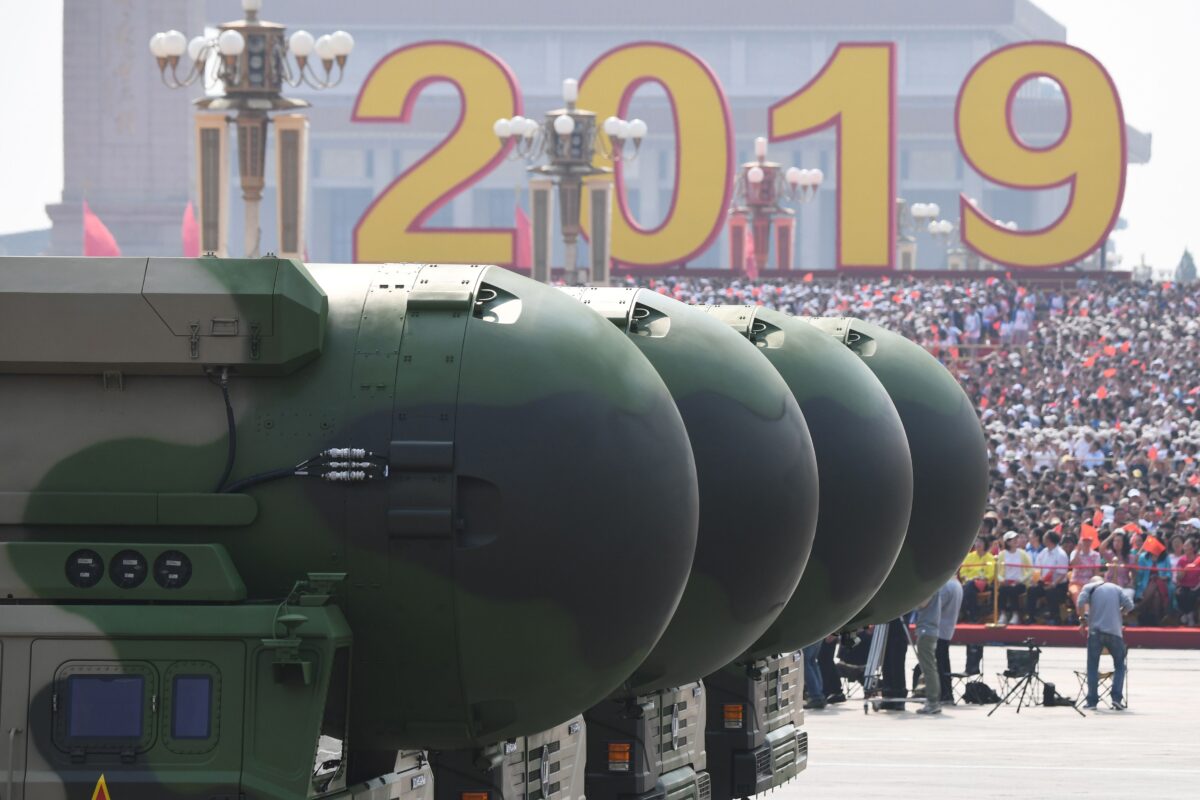 China Could Soon Use Nuclear Weapons to ‘Coerce’ the US, Experts Warn

The Chinese regime could use its strengthening nuclear capabilities to coerce the United States in as soon as a few years’ time, experts say, following recent reports exposing Beijing’s secret efforts to expand its nuclear arsenal.

China will have about 250 new silos, underground facilities for housing and launching intercontinental ballistic missiles (ICBMs), once it is done building them, the Federation of American Scientists (FAS) said in a report released last week. That number, according to the think tank, is more than all of the silo-based ICBMs operated by Russia and about half of America’s ICBM force.

About 110 of the new silos are located at a field near Hami, a city in the eastern parts of China’s far-western Xinjiang region, the FAS revealed, citing satellite photos. Another site was uncovered by California-based James Martin Center in June. Researchers found an unfinished field with about 120 silos located in Yumen, a city in Xinjiang’s neighboring Gansu Province.

“The silo construction at Yumen and Hami constitutes the most significant expansion of the Chinese nuclear arsenal ever,” the FAS report stated.

The significance of the latest silo discovery is that the Chinese military “may be on its way to an initial warhead inventory of over 3,000,” Rick Fisher, senior fellow at Virginia-based think tank International Assessment and Strategy Center, told The Epoch Times.

“China is now beginning a sprint to nuclear warhead superiority,” he said in an email.

The discovery of Beijing’s clandestine activities also raises the question of what else it may be doing to build its nuclear capabilities that the international community doesn’t know about, said Patty-Jane Geller, a policy analyst for nuclear deterrence and missile defense at the Washington-based think tank Heritage Foundation.

She noted that some have dismissed the threat posed by Beijing by citing public estimates of its nuclear stockpile which put it at 350 warheads, still a fraction of the inventory held by the United States and Russia. But the findings show that “we shouldn’t just be playing this numbers game,” Geller said.

“We cannot just be considering them as a country with just a few nuclear weapons anymore. We have to take them more seriously,” she told The Epoch Times.

“I don’t think most Americans would be okay with living with a China who can coerce the United States with a strong military capability.”

The United States may begin seeing “nuclear coercion” by Beijing “as early as mid-decade unless the U.S. takes counter actions now,” according to Fisher.

The threat is heightened if the regime teams up with Russia to combine nuclear forces to strong-arm the United States. For instance, it could prevent “a future weak American President from coming to the defense of Taiwan” should Beijing attack, he said.

“Unless America responds quickly we will be facing an era of strategic inferiority, constant bullying, and even nuclear attack by China and Russia,” Fisher said.

China’s nuclear expansion draws into question whether Beijing is still committed to a minimum deterrence posture, which it has publicly maintained for decades. The policy calls for the regime to keep its nuclear stockpile to the minimum level necessary to deter nuclear threats.

Fu Cong, director-general of the Department of Arms Control at China’s Ministry of Foreign Affairs, repeated the regime’s commitment during the annual EU Non-Proliferation and Disarmament Conference last November.

“I think it’s clear now that China is moving away from [minimum deterrence] and becoming more ambitious,” Gellar said. In addition to building new silos, Gellar said that China was also deploying new nuclear-capable bombers and developing ICBMs that could carry multiple warheads at once.

The FAS report argued that in light of the new silos, China has “move[d] out of the ‘minimum deterrence’ category.”

“This build-up is deeply concerning, [and] raises questions about the PRC’s [People’s Republic of China] intent,” a State Department spokesperson said in a statement to The Epoch Times.

The spokesperson added: “​​Despite PRC obfuscation, this rapid build-up has become more difficult to hide and highlights how China is deviating from decades of nuclear strategy based around minimum deterrence.”

At the time of writing, China’s foreign ministry has yet to comment on the new silos.

Inside China, calls have mounted for the regime to expand its nuclear arsenal. For instance, last May, Hu Xijin, editor-in-chief of hawkish state-run newspaper Global Times, took to his Chinese social media account calling for Beijing to quickly increase its number of nuclear warheads to over 1,000, including a minimum of 100 DF-41 ICBMs. He said the warheads were needed to “curb U.S. strategic aggression.”

Experts estimate that DF-41 ICBMs have an operational range of 9,300 miles (15,000 kilometers), making them capable of hitting the continental United States.

Also in May 2020, Chinese military expert Song Zhongping told Global Times that Beijing “needs to increase its number of nuclear weapons in order to effectively curb the United States’ nuclear strike and nuclear deterrence against China.”

Last week, Global Times published an editorial in response to the two reports on China’s new silo fields. The article did not deny or affirm the findings, but said that the regime should have a nuclear force “strong enough to make the US—from the military to the government—fear.”

During a congressional hearing in April, Richard said (pdf) that China’s nuclear stockpile was undergoing an “unprecedented expansion” and Beijing was “on the pace necessary to double their nuclear stockpile by the end of the decade.”

He added that the regime was on the cusp of deploying a full strategic nuclear triad—land-based missiles, submarines, and bombers.

“China is capable of executing any plausible nuclear employment strategy regionally now and will soon be able to do so at intercontinental ranges,” Richard said.

In response to the new discovery of China’s silos, the U.S. Strategic Command said in a tweet: “the public has discovered what we have been saying all along about the growing threat the world faces and the veil of secrecy that surrounds it.”

Washington needs to chart a new course in the face of the growing military threat posed by Beijing.

“To secure America from future Chinese and Russian nuclear threats, the Biden Administration is going to have to reverse its initial arms control and nuclear reduction preferences to instead lead the most aggressive U.S. nuclear buildup since the Cold War,” Fisher said.

After taking office in January, President Joe Biden renewed the New START arms control treaty for another five years until Feb. 5, 2026. The treaty, signed in 2010, limits Russia and the United States to no more than 1,550 nuclear warheads

Fisher said the treaty must be abandoned since it “no longer advances American security.”

While efforts have been made to bring in China for trilateral arms control negotiations, Beijing has rejected the call saying that the number of its nuclear arsenals was low compared to those of the United States and Russia.

According to Geller, the New START arms control treaty is outdated because it was signed at a time—11 years ago—when “we definitely didn’t know about the Chinese expansion that we’re seeing today.”

“The minimum thing we need to do is complete our own nuclear modernization efforts,” Geller said.

Cathy He contributed to this report.

Published in China and Communism