‘This is the battle we have been waiting for; the battle is not of flesh and blood’

While researching this new story over at the Tennessee Star titled “Ohio FEMA Camps – Still More Questions Than Answers”, I was absolutely stunned to find out just how many ‘forced isolation camps/facilities’ tied to COVID-19 are now popping up in states, cities and counties all across America.

Although FEMA camps in America have long been called ‘conspiracy theory’ by the ‘mainstream media apparatus’, as the Tennessee Star story explores, a ‘conspiracy theory’ they are NOT. As Paul Joseph Watson reports in this new story over at Infowars, while what are being called ‘raging campus outbreaks’ of coronavirus are sending college students packing across the country, the state of Ohio has partnered with FEMA to create ‘sheltering facilities’ for people exposed to COVID-19 who ‘can’t or refuse to‘ be isolated at home or another location.

With ANP reporting back on August 16th in this story titled “Harbingers Of Full-Scale Medical Tyranny Ahead: Govt Prepares To Deliberately Infect Americans With Man-Made Coronavirus Then Force Family Members To Be Removed From Homes Of Infected” of just such a scenario, you’ll be stunned to see just how many of these ‘facilities’ are now popping up all across the country as we’ll explore within the next section of this story below but first, from the Tennessee Star story.

The Ohio Star reported on September 3 that Ohio Department of Health (ODH) Interim Director Lance Himes released an order on August 31 – an order creating Federal Emergency Management Agency (FEMA) shelters and legalizing their use for people who “are unable to safely self-quarantine in their place of residence and to isolate those diagnosed with or showing symptoms of COVID-19″.

The non-congregate FEMA sheltering will be utilized throughout the state for people, according to the examples given by Himes, who “test positive for COVID-19 who do not require hospitalization but need isolation (including those exiting from hospitals); those who have been exposed to COVID-19 who do not require hospitalization; and asymptomatic high-risk individuals needing social distancing as a precautionary measure.”

Ohio Emergency Management Agency (EMA) is to secure the necessary approvals for the use of non-congregate sheltering and local health officials are to be on the lookout for both public and private spaces to be utilized for the FEMA camps.

When state officials determine the need to utilize the camps EMA is authorized to coordinate with state agencies.

State-funded colleges and universities are required to hand over their vacant buildings and grounds for use under the order.

And as The Star story also pointed out, this could end up leading to children being separated from their parents should a scenario arrive where a child has possibly been exposed to the virus at school and there is no way the child could be ‘safely quarantined’ at home without exposing other members of the family to this ‘virus’. Once again, from the Tennessee Star.:

After the 2 o’clock presser, The Star followed-up with DeWine’s Press Secretary Dan Tierney for clarification on the question asked during the Thursday press conference.

Tierney responded, “The order gives the state of Ohio the ability to draw down federal funding to reimburse the local EMA and health department when a non-congregate shelter is needed. These shelters are used when an individual is unable to safely quarantine or isolate in their home. The nature of these shelters is no different than what the EMA and others stand-up during natural disasters. The intent of the order is to provide a safe and healthy space for the individual who needs to be quarantined or isolated as determined by local needs. This also helps protect family members from exposure. FEMA has FAQ’s and more information available.”

“As determined by local needs’ remains ambiguous as an answer to the question of who decides whether a person’s residence is safe.”

The Star pressed with an additional question, “Would the non-congregate sheltering apply to Ohioans of all ages? That is, if a single parent has a one-bathroom apartment and a child is deemed to have had high exposure to COVID-19 at school and the health department determines that the child needs to isolate but also deems the single parent’s dwelling unsafe…is the child directed to the shelter?”

The response from the governor’s spokesperson, “Again, the nature of these shelters is typically for natural disasters. Usually, people seek alternate shelter well before the rare cases where local authorities might condemn a property due to a natural disaster.”

As mentioned above, after I began researching just how many of these ‘isolation facilities’ are popping up across America, I was stunned to see just how quickly and how far these ‘facilities’ are spreading.

The state of Arkansas.

The state of Alabama.

The state of Colorado.

The state of Florida.

The state of Georgia.

The state of Hawaii.

The state of New York.

The state of Wisconsin.

The state of Massachusetts.

The state of Indiana.

The state of Michigan.

The city of Anchorage, Alaska.

The city of Chicago, Illinois.

The city of Austin, Texas.

The city of Spokane, Washington.

The city of Kokomo, Indiana.

The city of Missoula, Montana.

The city of Jacksonville, Florida.

The city of Greeley, Colorado.

The city of Louisville, Kentucky. (Particularly infuriating after a US Veteran was found all alone at a Louisville ‘isolation facility’ after allegedly ‘testing positive’ for Covid-19!)

And while the list seen above is by no means exhaustive, and we welcome you putting any other links to cities/counties/states that are now ‘brewing up’ these ‘isolation facilities’ into the comment section below, here is an extensive list of the various state’s quarantine and isolation statutes. And while breaking quarantine can sometimes be a misdemeanor and sometimes worse depending upon what state, almost every US state has some type of law that reads something like this.:

When the secretary of health determines that it is medically necessary and reasonable to prevent or reduce the spread of the disease or outbreak believed to have been caused by the exposure to a deadly agent, (he/she) may order an individual or group of individuals to go to and remain in places of isolation or quarantine until the secretary determines that the individual no longer poses a substantial risk of transmitting the disease or condition to the public. 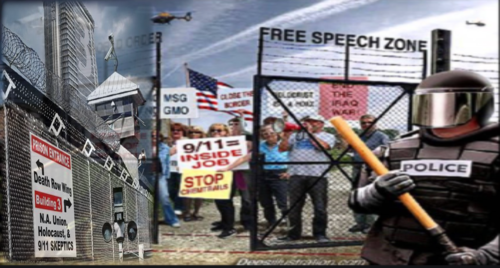 As we hear in the final video at the bottom of this story, with what are being called ‘Covid FEMA camp kidnappings’ already authorized at the highest levels in some ‘blue states’, the fact that some cities/counties have decided to keep their plans secret should be seen as a major red flag, especially with all of the chaos and unrest now going on all across America and the American people clearly still not getting ‘the whole truth and nothing but the truth’ about COVID-19 and how and why it was ‘unleashed’ upon us.

As this new story over at SHTFPlan titled “Warning, You’ve Entered A Terrifying Stage” warns, we should all be on high alert between now and the November elections and surely for the following months after it is over, especially with Democrats planning on attempting to ‘steal’ it away from President Trump by ‘manufacturing’ a huge number of fraudulent mail in ballots. From the SHTFPlan story.:

Between now and elections, I’d like to request that you remain on HIGH ALERT. The United States isn’t the fairytale land of opportunity that Hollywood films of the 1990s sold the world on; it’s a VERY COMPLEX country, with many ulterior motives going on behind the scenes.

One can really get caught IN THE CROSSFIRE and end up becoming a pawn in SOMEONE ELSE’S game. Right now, that theatre is the elections and it’s played on the GRANDEST of SCALES.

The soul of this country is what’s AT STAKE and that’s a fight that NEITHER SIDE is willing to lose without taking the ship down WITH IT.

You’ll see trash dug up about Biden’s and Trump’s pasts; any SKELETONS they have will be exhumed. It’s going to get STREET-UGLY!

So with the mainstream media warning us back in August about what was coming to America in this story titled “Forced Isolation May Be the Only Way to Stop Resurgence of Virus”, and now us witnessing these ‘forced isolation facilities’ popping up all across America, as ‘Prepping Army’ warned in this recent ANP story, we should all stay hyper-vigilant in the days ahead, especially with the blatant secrecy surrounding many of these ‘camps’ and the very real probability that Democrats/globalists are ‘using’ this ‘pandemic’ to ‘usher in’ their increasingly sinister agenda for America.

In the 1st video below, our videographer talks with us about ‘FEMA camps in Ohio’ with the video including phone calls recently made to the Ohio Department of Health. As one commenter warns on his video, “This is the battle we have been waiting for. The battle is not of flesh and blood”.

In the 2nd video, David Knight warns us that President Trump needs to issue a national call to end ‘the lockdown’ because it is giving the Democrats both the power and the opportunity to ‘steal’ the election, with ‘COVID-19 fraud’ the actual ROOT of the election may fraud ahead. And in the 3rd and final video below, we hear more about what are being called the ‘COVID-19 kidnappings’ now happening in some ‘blue states’ with the Ohio Department of Health partnering with FEMA to create “sheltering facilities” for people suspected to exposed to coronavirus who are unable to quarantine at home.