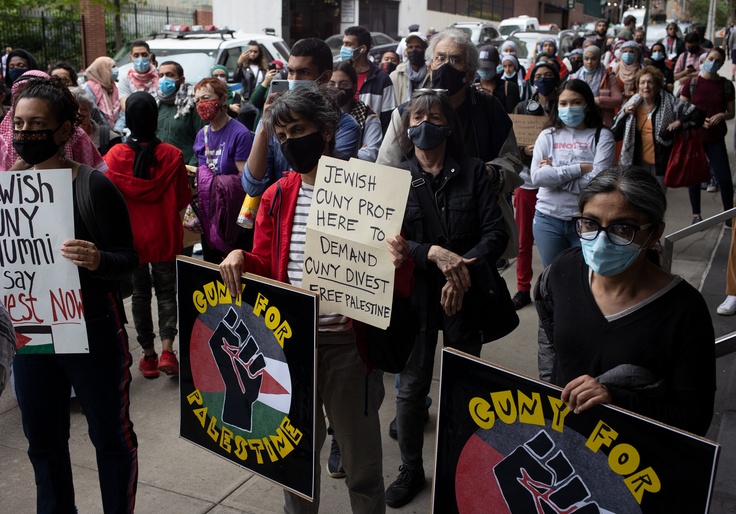 A Jewish professor in the City University of New York (CUNY) system resigned from a teachers’ union affiliated with the American Federation of Teachers after it passed a resolution condemning Israel and backing the anti-Semitic Boycott, Divestment, and Sanctions movement.

Jeffrey Lax, professor and chair of Kingsborough Community College’s business department, resigned from the Professional Staff Congress on June 17. A week earlier, the union passed a “Resolution in Support of the Palestinian People.” The statement, which made no mention of Hamas’s attacks, called Israel a “diverse nation state” guilty of committing “apartheid.” Lax says the statement is contradictory.

“Which one is it?” Lax asked the Washington Free Beacon. “Either you’re a diverse nation state or an apartheid state. They’re talking out of both sides of their mouth.”

The American Federation of Teachers has been dogged by accusations of anti-Semitism in recent months. Two affiliate unions in California issued anti-Israel statements during the recent Hamas attacks. Federation president Randi Weingarten attacked Jewish parents who supported reopening schools during the coronavirus pandemic and claimed Jews are “part of the ownership class.” CUNY has faced similar charges in recent years—the CUNY Graduate School of Public Health and Health Policy came under fire in 2017 when it picked the anti-Semitic activist Linda Sarsour as its 2017 commencement speaker. That same year, the university system awarded a top faculty honor to Beth Baron, a leading proponent of Israel boycotts.

More than 1,000 members of the CUNY community signed a petition supporting the Professional Staff Congress’s resolution, which condemned Israel for launching counterstrikes in the Gaza Strip in May after Hamas fired more than 4,000 rockets into the Jewish state. The statement called Israel a “settler colonial state” that practices “apartheid” and “legalized racial discrimination” against the Palestinian people. The resolution also endorsed the anti-Semitic Boycott, Divestment, and Sanctions movement, which seeks to punish Israel through economic measures.

The resolution was the “last straw” for Lax, who told the Free Beacon that teachers’ groups at CUNY have for years fostered an environment hostile to Jews. In May 2019, Lax asked the Equal Employment Opportunity Commission to investigate CUNY, the Professional Staff Congress, and the Progressive Faculty Caucus, a separate faculty group that counts among its members leaders of the Professional Staff Congress.

The EEOC concluded its investigation in February and confirmed Lax’s allegations that the university and faculty groups had discriminated against Jews.

According to Lax’s complaint, Progressive Faculty Caucus denied membership to observant and Zionist Jews. The caucus also hosted meetings on Friday night, the start of the Jewish Sabbath, in order to exclude Jewish professors.

Though the EEOC substantiated Lax’s claims, a spokesman for the union called the professor’s “characterization” of the union in his resignation letter “inaccurate.”

“The Professional Staff Congress has a strong and stable membership base because our union has a long history of successfully fighting to improve the working conditions of our members and tenaciously advocating for accessible, quality public higher education and social justice and against all forms of racism and bigotry, including anti-Semitism,” said spokesman Fran Clark.

In addition to the incidents outlined in the EEOC complaint, Lax told the Free Beacon he was accosted on campus after the New York Daily News reported that another Kingsborough professor, Anthony Alessandrini, raised funds for a charity linked to a Palestinian terrorist organization during a campus event. Lax said his colleagues screamed at him and blamed him for the article.

Students at CUNY have also had brushes with anti-Semitism. Lax said one professor didn’t allow a Jewish student to make up a test that was scheduled on a Jewish holiday. The professor allegedly told the student that he should have attended a Jewish school if he wanted time off for Jewish holidays. Another observant Jewish student was lambasted at an event by a teacher, who said the student was privileged.

The Lawfare Project filed a federal lawsuit against CUNY on Lax’s behalf in February 2016, claiming that administrators at Kingsborough created an unfriendly environment for Jews.

“For years Professor Lax has faced harassment and discrimination on the CUNY Kingsborough Community College campus because of his faith,” Benjamin Ryberg, chief operating officer and director of research at the Lawfare Project, told the Free Beacon. “For Professor Lax and all Jews who are similarly targeted on campuses across the country, we will continue to work tirelessly to protect their civil and human rights.”

While he’s faced harassment and intimidation over the past few years, Lax—whose great-grandparents were killed by the Nazis—told the Free Beacon he felt “privileged” to be able to stand up against hatred directed at Jews.

“I have to be honest, as a grandchild of four Holocaust survivors, and a great-grandchild of eight people who were murdered by the Nazis, and child of parents who grew up in communist countries … even though it’s very difficult to be harassed by these people, I truly feel privileged to be able to be in this position, where I can do something about it.”