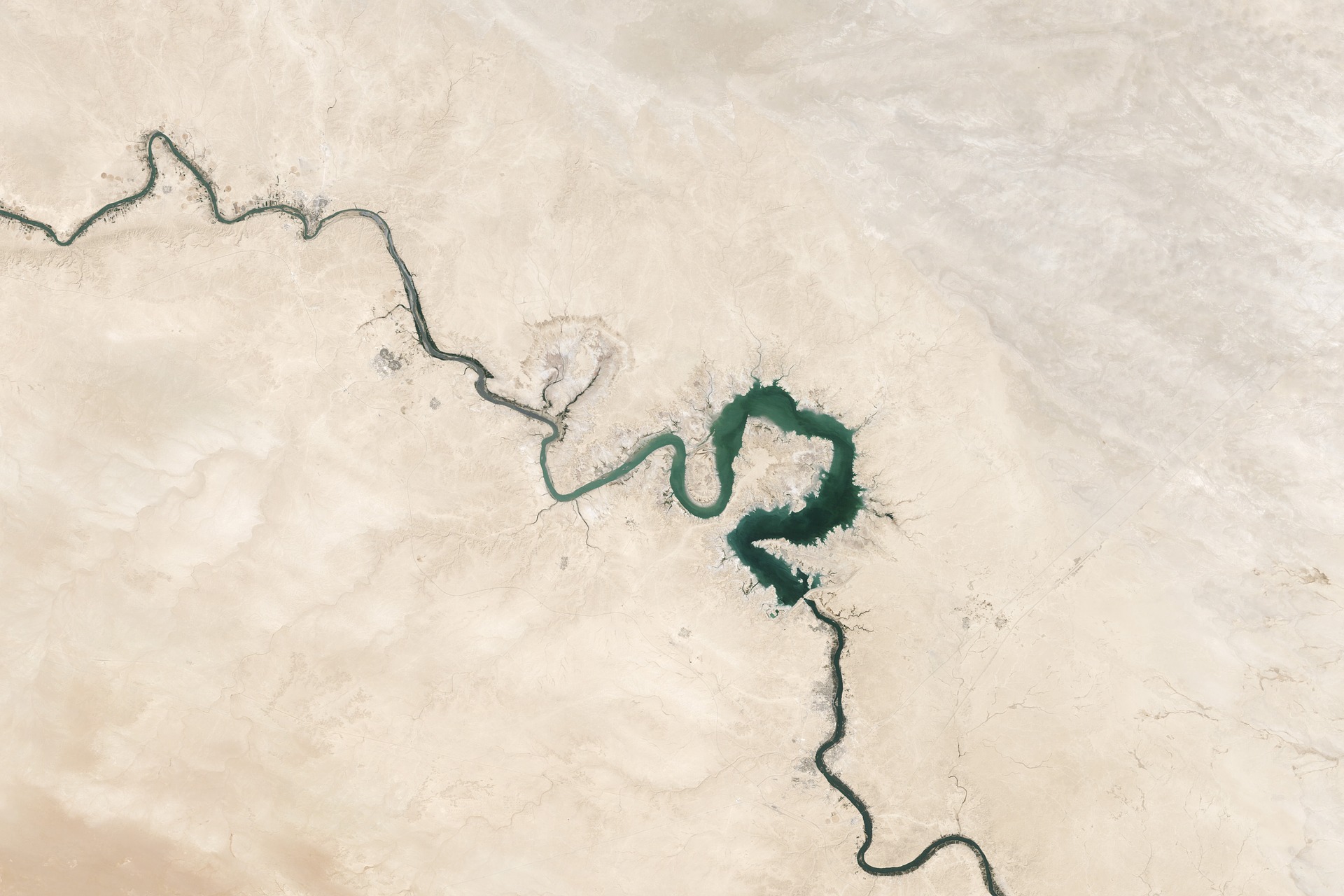 Aid groups and engineers are warning of a looming humanitarian disaster in northeast Syria, where…

Aid groups and engineers are warning of a looming humanitarian disaster in northeast Syria, where waning river flow is compounding woes after a decade of war.

(AFP) — Syria’s longest river used to flow by his olive grove, but today Khaled al-Khamees says it has receded into the distance, parching his trees and leaving his family with hardly a drop to drink.

“It’s as if we were in the desert,” said the 50-year-old farmer, standing on what last year was the Euphrates riverbed.

“We’re thinking of leaving because there’s no water left to drink or irrigate the trees.”

Aid groups and engineers are warning of a looming humanitarian disaster in northeast Syria, where waning river flow is compounding woes after a decade of war.

They say plummeting water levels at hydroelectric dams since January are threatening water and power cutoffs for up to five million Syrians, in the middle of a coronavirus pandemic and economic crisis.

As drought grips the Mediterranean region, many in the Kurdish-held area are accusing neighbour and archfoe Turkey of weaponising water by tightening the tap upstream, though a Turkish source denied this.

Outside the village of Rumayleh where Khamees lives, black irrigation hoses lay in dusty coils after the river receded so far it became too expensive to operate the water pumps.

Instead, much closer to the water’s edge, Khamees and neighbours were busy planting corn and beans in soil just last year submerged under the current.

The father of 12 said he had not seen the river so far away from the village in decades.

“The women have to walk seven kilometres (four miles) just to get a bucket of water for their children to drink,” he said.

Reputed to have once flown through the biblical Garden of Eden, the Euphrates runs for almost 2,800 kilometres (1,700 miles) across Turkey, Syria and Iraq.

In times of rain, it gushes into northern Syria through the Turkish border, and flows diagonally across the war-torn country towards Iraq.

Along its way, it irrigates swathes of land in Syria’s breadbasket, and runs through three hydroelectric dams that provide power and drinking water to millions.

But over the past eight months the river has contracted to a sliver, sucking precious water out of reservoirs and increasing the risk of dam turbines grinding to a halt.

At the Tishrin Dam, the first into which the river falls inside Syria, director Hammoud al-Hadiyyeen described an “alarming” drop in water levels not seen since the dam’s completion in 1999.

“It’s a humanitarian catastrophe,” he said.

Since January, the water level has plummeted by five metres, and now hovers just dozens of centimetres above “dead level” when turbines are supposed to completely stop producing electricity.

Across northeast Syria, already power generation has fallen by 70 percent since last year, the head of the energy authority Welat Darwish says.

Two out of three of all potable water stations along the river are pumping less water or have stopped working, humanitarian groups say.

Almost 90 percent of the Euphrates flow comes from Turkey, the United Nations says.

To ensure Syria’s fair share, Turkey in 1987 agreed to allow an annual average of 500 cubic metres per second of water across its border.

But that has dropped to as low as 200 in recent months, engineers claim.

Inside Syria, the Euphrates flows mostly along territory controlled by semi-autonomous Kurdish authorities, whose US-backed fighters have over the years wrested its dams and towns from the Islamic State group.

Turkey however regards those Kurdish fighters as linked to its outlawed Kurdistan Workers’ Party (PKK), and has grabbed land from them during Syria’s war.

Syria’s Kurds have accused Ankara of holding back more water than necessary in its dams, and Damascus in June urged Turkey to increase the flow immediately.

But a Turkish diplomatic source told AFP Turkey had “never reduced the amount of water it releases from its trans-boundary rivers for political or other purposes”.

“Our region is facing one of the worst drought periods due to climate change,” and rainfall in southern Turkey was “the lowest in the last 30 years”, this source said.

Analyst Nicholas Heras said Turkey did hold leverage over Syria and Iraq with the huge Ataturk Dam just 80 kilometres from the Syrian border, but it was debatable whether Ankara wanted to use it.

That would mean “international complications for Ankara, both with the United States and Russia”, a key Damascus ally across the table in Syria peace talks.

“The easier, and more frequently utilised, water weapon that Ankara uses is the Alouk plant” that it seized from the Kurds in 2019, Heras said.

Fresh water supply from the station on another river has been disrupted at least 24 times since 2019, affecting 460,000 people, the United Nations says.

“In periods of drought, Turkey helps itself and leaves the rest for the Kurds, in defiance and in full knowledge of the consequences,” he said.

Wim Zwijnenburg, of the PAX peace organisation, said Turkey was struggling to provide enough water for “megalomanic” agricultural projects set up in the 1990s, a challenge now complicated by climate change.

“The big picture is drought is coming,” he said.

“We already see a rapid decline in healthy vegetation growth on satellite analysis” in both Syria and Turkey.

These dry spells are to become longer and more severe around the Mediterranean, the United Nations has warned, with Syria most at risk, according to the 2019 Global Crisis Risk Index.

Downstream from the Tishrin Dam, the Euphrates pools in the depths of Lake Assad.

On its banks, men with tar-stained hands worked to repair generators exhausted from pumping water across much further distances than in previous years.

“We can no longer afford the hoses or the generators,” said the father of 12.

“The olive trees are thirsty and the animals are hungry.”

At home, in the village of Twihiniyyeh, power cuts had increased from nine to 19 hours a day, he said.

At the country’s largest dam of Tabqa to the south, veteran engineer Khaled Shaheen was worried.

“We’re trying to diminish how much water we send through,” he said.

But “if it continues like this, we could stop electricity production for all except… bakeries, flour mills and hospitals.”

nding on the Euphrates for drinking water, more and more families are ingesting liquid that is unsafe.

Those cut off from the network instead pay for deliveries from private water trucks.

But these tankers most often draw water directly from the river — where wastewater concentration is high due to low flow — and these supplies are not filtered.

Waterborne disease outbreaks are on the rise, and contaminated ice has caused diarrhoea in displacement camps, according to the NES Forum, an NGO coordination body for the region.

Marwa Daoudy, a Syrian scholar of environmental security, said the decreasing flow of the Euphrates was “very alarming”.

“These levels threaten whole rural communities in the Euphrates Basin whose livelihood depends on agriculture and irrigation,” she said.

Aid groups say drought conditions have already destroyed large swathes of rain-fed crops in Syria, a country where 60 percent of people already struggle to put food on the table.

In some communities, animals have started to die, the NES Forum has said.

Balanche said Syria was likely facing a years-long drought not seen since one from 2005 to 2010, before the civil war.

“The northeast, but also all of Syria, will be short on food, and will need to import massive quantities of cereals.”

By Delil Souleiman with Alice Hackman in Beirut