Did Mike Pence subtly reveal the strategy to stop the steal on January 6th and beyond? 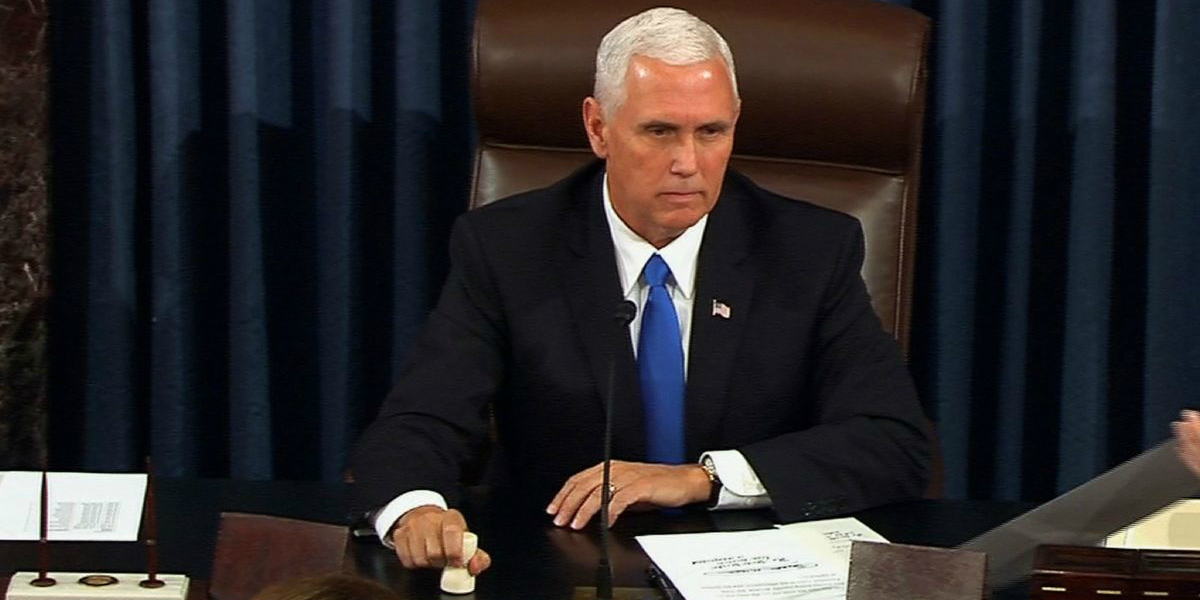 Did Mike Pence subtly reveal the strategy to stop the steal on January 6th and beyond?

Frustration with Vice President Mike Pence in recent weeks has been understandable. That’s not just…

Frustration with Vice President Mike Pence in recent weeks has been understandable. That’s not just me trying to make excuses for venting at his lack of action against the coup attempt that is underway in the United States. He has been conspicuously reserved about the whole issue. Even when he discusses it in public, he has been milquetoast in pronouncements like “we will count every legal vote” and “we will let the voices of Americans be heard.”

Following an announcement by Senator Ted Cruz yesterday that he and a group of Republican Senators want a commission to be formed to investigate election irregularities, the Vice President’s staff issued a statement of support.

“Vice President Pence shares the concerns of millions of Americans about voter fraud and irregularities in the last election,” Marc Short, Pence’s chief of staff, said in a statement. “The Vice President welcomes the efforts of members of the House and Senate to use the authority they have under the law to raise objections and bring forward evidence before the Congress and the American people on January 6th.”

The key phrase in the statement was ignored by most media outlets. The focus has been on his support of lawmakers to raise objection during the January 6th joint session of Congress in which electoral votes are supposed to be counted. But the real takeaway here, and possibly a hint to the administration’s strategy at this late stage, is that Pence welcomes efforts to “bring forward evidence before the Congress and the American people on January 6th.”

As I noted in a previous column, the challenge isn’t in finding the evidence. There is plenty. The challenge is in getting that evidence in front of the American people. Mainstream media and Big Tech have put forth a superb, albeit evil effort in suppressing information about the plethora of voter fraud allegations. They’ve quashed all forms of direct evidence that lead those in the know to the clear conclusion that widespread voter fraud changed the results of the election in at least six contested states.

With most Americans still getting their news from mainstream media and Big Tech, it’s no wonder why there hasn’t been more of a fuss over voter fraud. They’re being led to believe that it either doesn’t exist or that it was limited in scope. They look to the complicit judiciary and their unwillingness to hear the evidence and assume that means there is none.

What most don’t know is that the ability of mainstream media, Big Tech, all Democrat lawmakers, many Republican lawmakers, and most importantly the judiciary to stick their collective heads in the sand and pretend there’s no evidence is predicated on the majority of Americans not knowing about it. If the perpetrators of the voter fraud cover-up believe they will not be held accountable by the people, they have no reason to act honorably.

Are Mike Pence and the White House choosing to have the mountains of evidence finally revealed to the general population of the United States on January 6th? That seems to be likely, especially when we consider the President has already said as much. Whether that has been the plan for a while or if it’s a last ditch effort is unknown a this point, but it doesn’t really matter either way. As long as it happens, it’s a good thing. Based on the short statement by the Vice President, it looks like it’s going to happen.

But mainstream media and Big Tech will continue to engage in the cover-up. They will not willingly air the evidence. It’s imperative that Constitution-defending Americans do everything we can before, during, and after January 6th to wake people up from their MSM-induced mental slumber. The people must be made to see and hear the evidence and to think critically about it. There seems to be a great, perhaps even supernatural delusion over tens of millions of Americans right now, which is why the coup attempt is proceeding with limited pushback. It must be our mission going forward to expose voter fraud to as many as we can.

Many will argue that it’s a lost cause. They’ll say unless we can get a seemingly impossible majority in both chambers to reject the electoral votes of at least three states, objections and presentation of evidence will be fruitless. This is incorrect. As I said in a previous column, January 6th is not the deadline to stop the steal. Right now, the judiciary can hide behind the ignorance of the people. But even they are not immune to pressure from an aware populace. If we can get enough people to start asking questions and demanding answers, it will be very difficult for the judiciary to continue to abdicate.

We have the evidence. We just need to get the evidence in front of the people. Mike Pence has the power to let it happen and now he has finally said he’s willing to do so. January 6th is going to be epic.