Donald Trump blasts Federal Reserve and chairman Jay Powell for ‘no guts, no sense, no vision’ as bank cuts interest rates by 0.25% – far less than he wanted 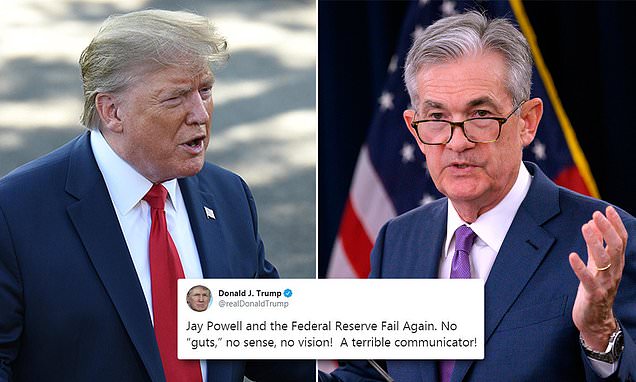 The Fed, led by chairman Jerome Powell, lowered the benchmark overnight lending rate to a…

The U.S. Federal Reserve cut interest rates by a quarter of a percentage point for the second time this year on Wednesday in a widely expected move meant to sustain a decade-long economic expansion, but gave mixed signals about what may happen next.

President Donald Trump, traveling in California, quickly made it known that he believes the move is too small and too late to help the U.S. economy grow in line with its potential.

‘Jay Powell and the Federal Reserve Fail Again. No “guts,” no sense, no vision! A terrible communicator!’ Trump wrote on Twitter.

The central bank also widened the gap between the interest it pays banks on excess reserves and the top of its policy rate range, a step taken to smooth out problems in money markets that prompted a market intervention by the New York Fed this week.

Though the U.S. economy continues growing at a ‘moderate’ rate and the labor market ‘remains strong,’ the Fed said in its policy statement that it was cutting rates ‘in light of the implications of global developments for the economic outlook as well as muted inflation pressures.’