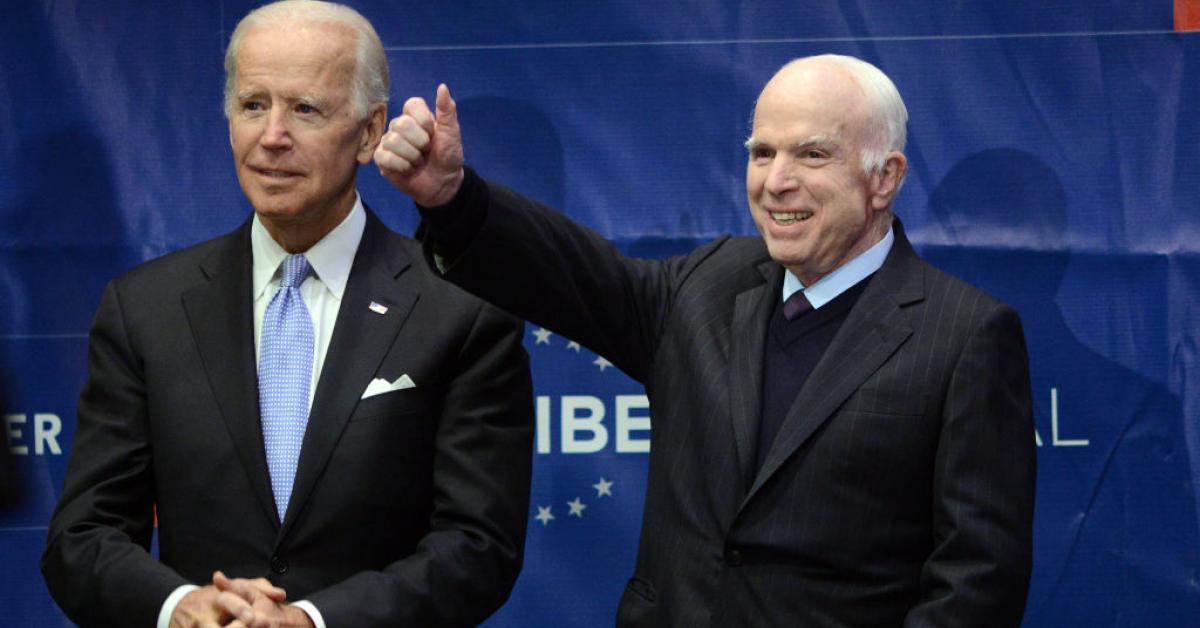 By John Solomon and Lee Smith

The efforts to disseminate a now-discredited theory that the Trump campaign had secret computer communications with the Kremlin extended beyond the FBI, CIA, and State Department to the U.S. Senate.

Under the late Sen. John McCain, the Armed Services Committee engaged a former FBI official and his progressive-funded nonprofit to produce a report on the matter, according to court records obtained by Just the News.

The Senate committee, now under Democrats’ control, successfully waged a secret federal court battle this summer to quash a subpoena that would have forced one of its staffers, Thomas Kirk McConnell, to turn over documents and testify about his dealings with former FBI analyst Dan Jones and his nonprofit, The Democracy Integrity Project, the records show.

A spokesman for George Soros confirms the progressive megadonor was one of the financial backers of The Democracy Integrity Project. Tax records show the group raised more than $7 million in donations in 2017 and hired Fusion GPS — the same firm that produced the debunked Steele dossier for Hillary Clinton’s campaign — to pursue allegations of foreign interference in elections.

The episode, recounted in hundreds of pages of federal and D.C. Superior court records, provides extraordinary insight into how current and former government officials in multiple branches of government were able to sustain a Russia collusion theory on artificial life support for years after the FBI first dispelled it.

The legal skirmish with the Senate also provides new context to allegations filed last week by Special Counsel John Durham, who indicted a former DOJ lawyer named Michael Sussmann for lying to the FBI during his efforts to peddle the same debunked story about the Trump campaign, a computer server at the Alfa Bank in Moscow and the Kremlin. Sussmann was being paid by Hillary Clinton’s campaign when he pitched the allegations to the bureau, court records show. He has pleaded not guilty.

The FBI, the Russia collusion probe Special Counsel Robert Mueller, and now Durham have all concluded the Alfa Bank allegations had no merit. “It’s not true,” Mueller testified in 2019.

Nonetheless, the court documents show, Jones continues to stake his reputation on the theory, insisting there was and is good reason to believe it. His lawyers argued in a recent court filing that Alfa Bank should not be allowed to release documents publicly chronicling Jones’ dealings with the Senate, including the complete 600-plus page report he filed in October 2018 with the committee and his contacts with a Democratic staffer on the committee.

“The report reached seven findings … Those findings are accurate,” his lawyer William Taylor argued in a Sept. 14 court filing. The Armed Services Committee first engaged his client’s services in spring 2017 while McCain was chairman, the filing revealed, and Jones performed his work free of charge for more than a year through The Democracy Integrity Project, also known as TDIP.

“TDIP and Mr. Jones’s analysis was conducted confidentially and pursuant to TDIP’s public interest mission,” the filing added. “TDIP was not paid for its analysis.” The final report was never made public by the committee.

The Senate confirmed in a legal filing in federal court this summer that Jones and his group worked for the committee, asking a judge to quash a subpoena from Alfa Bank seeking records of the work and Jones’ communications with McConnell, a Democratic cybersecurity staffer on the committee.

Senate lawyers argued the committee was protected by “sovereign immunity” and the Speech and Debate clause of the Constitution and should not be forced to disclose the details of its work. Alfa Bank withdrew its subpoena request a few days ago before the judge could rule in the case.

The revelation that a committee led by the Republican McCain and Democratic Sen. Jack Reed of Rhode Island engaged a nonprofit with significant partisan ties is certain to reverberate in Washington and further the GOP narrative that the Russia collusion allegations were more a political dirty trick than a legitimate counterintelligence concern. Mueller concluded there was no evidence Trump and Russia colluded to hijack the 2016 election.

Before his death in 2018, McCain was an ardent opponent of Trump, his own party’s president, and famously gave a copy of the Steele dossier to the FBI in late 2016, an act the 45th president long has condemned as a betrayal.

Republicans on the Senate Armed Services Committee on Thursday deferred questions to the panel’s Democratic press secretary, Cole Stevens, who did not respond to a call seeking comment Thursday. Reed took over as committee chairman earlier this year.

A source, who has worked on the committee both when it was run by McCain and now by Reed, told Just the News that the committee was still searching for records to explain the exact nature of the relationship with Jones and TDIP. The source said Reed enjoyed a good working relationship with McCain and current Republican ranking member Sen. Jim Inhofe and that it would be unlikely for Reed’s staff to have done such work in 2017 and 2018 without GOP colleagues on the panel knowing about it.

Likewise, a contractor who worked with Jones and TDIP told Just the News he believed both McCain’s Republican team as well as Reed’s Democratic staff were aware of the research arrangement. The person, who spoke only on condition of anonymity, said the work stretched out for nearly 18 months from March 2017 to October 2018.

Jones is a respected former FBI analyst who also worked for the Senate Intelligence Committee before starting The Democracy Integrity Project or TDIP in 2017. The group was designed in part to pick up the work started under the Clinton campaign by Fusion GPS and former MI-6 agent Christopher Steele seeking to link Trump to Russia collusion. Its tax filings show it raised $7 million in 2017 to start its work.

A Soros spokesman told The Hill in 2019 that the billionaire philanthropist wrote a sizable check from his personal funds in fall 2017 to TDIP in hopes it would continue “investigation and research into foreign interference in American elections and European elections.” That spokesman said Soros later learned that Fusion and Steele, who had previously worked for the Clinton campaign, had done some work for TDIP.

According to the new court records obtained by Just the News, the Senate Armed Services Committee asked Jones and TDIP to investigate the Trump-Alfa allegations. His point of contact with the committee was McConnell, a staffer for Reed, who was then the ranking member on the committee.

Jones spent “more than a year rigorously analyzing” the data to produce a 687-page research paper, an abridged version of which is an exhibit in the filing. He wasn’t paid by the Senate for his work, which according to one congressional ethics expert could raise red flags under Senate ethics rules.

“Generally speaking, the gift rule prohibits in-kind donation of services along with other things of value,” said Jason Foster, a former investigator on Sen. Charles Grassley’s staff and the current president of Empower Oversight, an organization supporting government whistleblowers. “The facts described in the filing — particularly that TDIP ‘retained computer science experts to examine the data,’ following a request from a Senate staffer and then provided the results of that analysis at no charge — raise questions about whether that arrangement was evaluated and approved by the Ethics Committee.”

Last week, Durham’s special counsel investigation made public evidence suggesting the Alfa Bank story had been concocted to frame Trump as a Russian agent. In his 27-page indictment of Sussmann, Durham included emails between the former DOJ official and computer experts. The purpose of their research was to “give the base of a very useful narrative.” The indictment alleged Sussmann brought the allegation to the FBI in September 2016 even after his team expressed concerns it was a “red herring.”

According to Steele, the British ex-spy who disseminated a notorious dossier falsely alleging Trump ties to Russian officials, Sussmann relayed the Alfa Bank allegations to him and Glenn Simpson, cofounder of Fusion GPS, in a summer 2016 meeting. Subsequently, Sussmann, Steele, and Simpson began to relay the Trump-Alfa story to U.S. officials and the press.

In September 2016, Sussmann met with then-FBI General Counsel James Baker to pass him documents created by the team of tech experts he’d set up to produce the Trump-Alfa allegations. In December, according to the Durham indictment, Sussmann also contacted the general counsel of another government agency thought to be the CIA. In his congressional testimony, he referred to it as “the Agency.”

Sussmann gave the story to several reporters, including Franklin Foer, who would eventually publish the story in Slate on Oct. 31, 2016. The same day, the New York Times ran an article that threw cold water on the Alfa Bank allegations, reporting that the FBI had investigated and found nothing suspicious.

Simpson, it appears, had given the story to New York Times reporter Eric Lichtblau and later recounted that he expressed his frustration with him. “We told you a lot about how the FBI was investigating the Trump team for its ties to Russia,” Simpson recounts in a 2019 book he coauthored with Fusion GPS cofounder Peter Fritsch. “But your story made it sound as if they found nothing to it. We’re quite sure that is wrong.”

Simpson also relayed the Trump-Alfa allegations to senior Justice Department official Bruce Ohr, whose wife Nellie was employed by Simpson. Bruce Ohr served as a conduit for Fusion GPS, regularly passing on information from his wife, Steele, and Simpson to the FBI.

A month before the 2016 election, Steele met with State Department official Kathleen Kavalec and claimed that Alfa Bank was a channel through which Trump and Russian officials communicated. She in turn provided notes from her Steele interview to the FBI.

Given the roles of Steele, a former MI6 agent, Sussmann, a one-time Justice Department official, and Ohr, who is still at DOJ, a clear pattern emerges. The Clinton campaign and liberal donors used former and current government officials to walk allegations into the executive branch institutions designed to protect U.S. national security and advance American foreign policy and to a prominent Senate committee.

Published in Biden, Geörgy Schwartz (a.k.a. George Soros), Political News, Russia, Russian Intervention in US Elections, Trump and US News