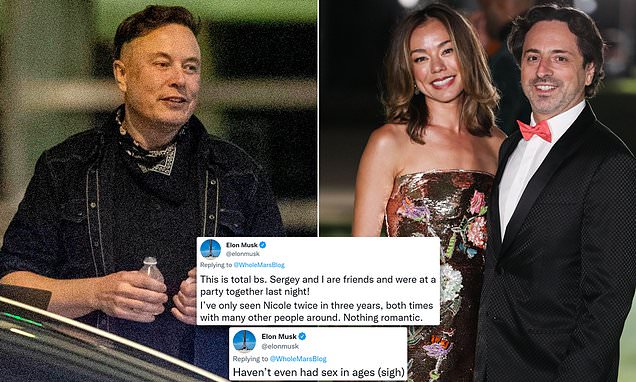 Musk, 51, took to Twitter Sunday evening in response to the reports that he allegedly…

by Stephen M. Lepore For Dailymail.Com

Elon Musk has denied claims he had an affair with the wife of Google co-founder Sergey Brin at Art Basel Miami last December, which allegedly led to the pair’s divorce.

Musk, 51, took to Twitter Sunday evening in response to sources who alleged he got down on one knee to beg Brin for his forgiveness at a party earlier this year after the Google founder learned of Musk’s affair with his wife, Nicole Shanahan.

The billionaire tweeted in response to an article in the Wall Street Journal detailing the sordid saga: ‘This is total bs. Sergey and I are friends and were at a party together last night! I’ve only seen Nicole twice in three years, both times with many other people around. Nothing romantic.’…