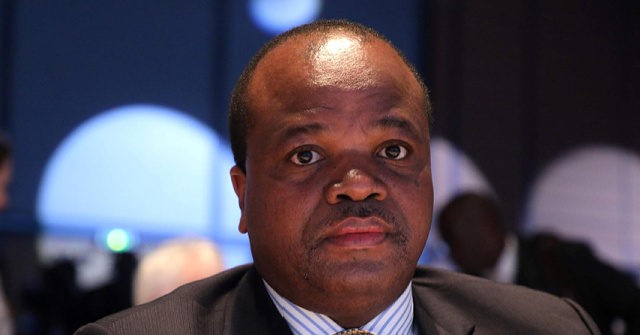 “Following the false media reports circulating, I would like to take this opportunity to assure the emaSwati [Swazi people] and the international community that His Majesty King Mswati III is in the country and continues to lead in working with the government to advance the kingdom’s goals,” Prime Minister Masuku said in a statement issued June 29.

“Government will update the nation on the interventions on the current situation as the day progresses. In the meantime, we appeal for calm, restraint, and peace for all eMaSwati [Swazi people],” the statement further read.

Protests against Eswatini’s monarchical rule began in recent days and turned violent on Tuesday, according to the South African Broadcasting Corporation (SABC).

“A number of people have taken to social media after reports that King Mswati III of Eswatini has fled the kingdom after pro-democracy protests turned into chaos,” SABC News reported on June 29 before Eswatini Prime Minister Themba Masuku issued a statement insisting that King Mswati remained in the country.

“Unconfirmed reports say protesters went on the rampage and set fire to several shops in [the industrial town of] Matsapha,” SABC News reported at the time, adding, “Several people have allegedly been injured.”

BREAKING NEWS: Ok Foods in Matsapha and other outlets on fire as pro-democracy protests turn into chaos. This was after King Mswati through Acting Prime Minister issued a decree banning delivery of petitions. pic.twitter.com/NqKO9qAIuW

Eswatini is a small, landlocked nation located between South Africa and Mozambique. Anti-monarchy protesters and rioters have set fire to government buildings and grocery stores in the country in the past 24 hours, according to video clips published by the Twitter account of Swazi News on June 29.

Eswatini protestors now operating at night burning businesses linked to King Mswati and Government properties. This was after the King issued an order to the army to shot the citizens who are demanding democracy.
Chaos is intensifying in Matsapha and other towns. pic.twitter.com/vXVEaM1lc3

Eswatini’s government banned protests nationwide over the weekend after large numbers of people gathered in some cities “to hand in petitions demanding [political] change” in the country, the BBC reported on June 29.

The British broadcaster detailed a string of recent events that allegedly lead to Eswatini’s violent riots:

The trouble began in May after law student Thabani Nkomonye’s body was found outside the city of Manzini.

Police said he was a victim of a car accident, but students alleged the police were involved in his death.

Demonstrations erupted in response, originally organised under the hashtag #JusticeforThabani — calling for an end to police brutality and have since morphed into calls for political change. Crowds rallied with banners and chanting slogans calling for King Mswati to make way for democratic reform.

Mlungisi Makhanya, a leading member of Eswatini’s opposition party, Pudemo, told the BBC on Tuesday that anti-monarchy protesters have compiled a list of demands for the government, including “political freedoms and jobs — in particular an elected prime minister with executive power.”

“Another key demand is an end to the royal family’s extravagant spending as most Swazis with a job work in neighbouring South Africa and send their earnings home,” the BBC relayed.

“They are demanding an end to royal supremacy so that a lot of national funds are not spent on feeding one family,” Makhanya said.

Eswatini is Taiwan’s last remaining ally on the African continent. Under the rule of King Mswati III, the absolute monarchy has established firm diplomatic ties with Taiwan. Beijing considers the sovereign nation of Taiwan, located off the southeastern coast of mainland China, a “renegade” province and claims it has no right to establish formal diplomatic relations with other states. Eswatini’s abiding support of Taiwan on the global stage has provoked the ire of Beijing, which has unsuccessfully courted King Mswati to join China’s infrastructure-building Belt and Road Initiative (BRI). Eswatini refuses to accept any BRI money from Beijing, which the Chinese Communist Party uses to spread its influence worldwide, in large part because the nation recognizes Taiwanese sovereignty.

“They are our major partner,” Eswatini Foreign Affairs Minister Mgwagwa Gamedze said in August 2018, referring to Taiwan. “So they (China) must forget about having us in their stable.”

King Mswati III revealed in February that he had contracted the Chinese coronavirus in January and credited his recovery to Taiwanese President Tsai Ing-wen sending him antiviral medication for use in his treatment.