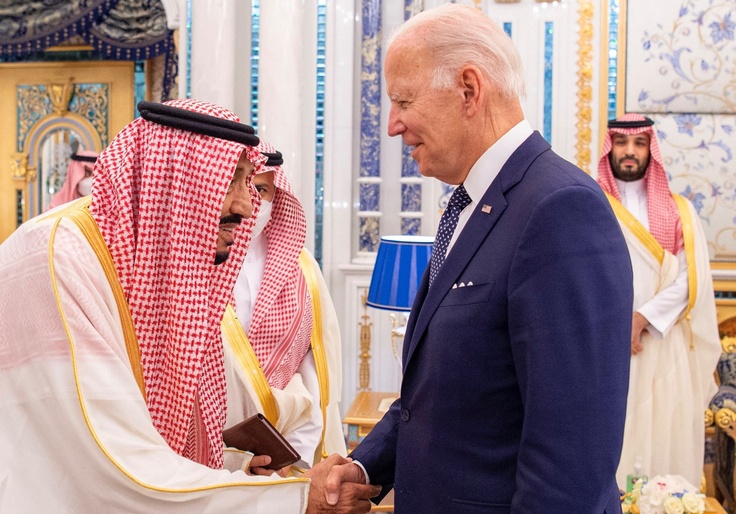 President Joe Biden visited oil-rich Saudi Arabia on Friday to grovel before its authoritarian leader, Crown Prince Mohammed bin Salman (MBS), in a desperate attempt to stem the soaring price of gasoline in the United States. The president fist-bumped MBS upon arriving in Jeddah, which was an embarrassing moment. Not quite as embarrassing, however, as Barack H. Obama’s servile bow before the late King Abdullah during his 2009 apology tour.

The trip revealed that Biden’s campaign pledge to make Saudi Arabia “pay the price” for human rights abuses—including the 2018 murder and bone-saw dismemberment of Washington Post journalist Jamal Khashoggi—and “make them in fact the pariah that they are” was a blatant lie. (Yes, a lie. The Washington Free Beacon is using that word in contravention of longstanding journalistic norms in an effort to highlight the president’s dangerous dishonesty.)

Above all, Biden’s trip to Saudi Arabia provides an opportunity to discuss a topic the American mainstream media too often neglect: fatherhood. One of the reasons why the president’s meeting with MBS is so significant is that the crown prince is merely the country’s de facto leader after gently seizing control from his 86-year-old father, King Salman bin Abdulaziz al Saud.

Shortly after Biden took office in 2021, the White House insisted that King Salman—not the 36-year-old MBS—was “the president’s counterpart” in Saudi Arabia. Friday’s fist-bump suggests otherwise. Nevertheless, Biden and King Salman have a lot in common. As of Nov. 20, they will both be octogenarians. More importantly, they both understand what it’s like to be the famous father of an infamous son.