Former Senior Military Official: Milley Had ‘Pattern of Behavior’ of Exceeding His Authority and Undermining Trump 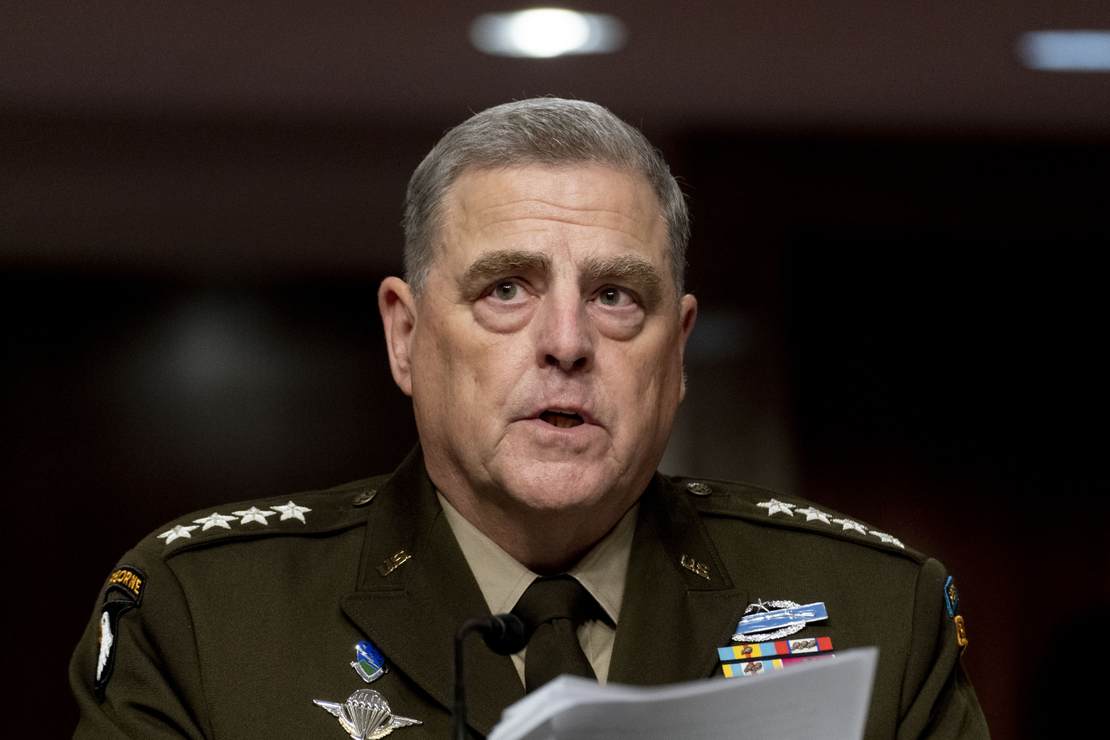 Former Senior Military Official: Milley Had 'Pattern of Behavior' of Exceeding His Authority and Undermining Trump

And Milley wasn't the only one.

Wardynski also alleged the Chief of Staff of the Army, James McConville, did the same thing.

We’ve been reporting how Milley allegedly contacted the Chinese and told them that he would give them a heads up if we had any plans to attack them. He also intervened in the nuclear command authority of Trump by telling officers that they should not listen to anything unless it came through him, a breach of his authority because he had no operational command authority. He did that after being pushed by House Speaker Nancy Pelosi (D-CA) in what amounted to her trying to overthrow the constitutional authority of the elected president of the United States.

But Wardynski said that this was just one instance of a “pattern of behavior.”

“These kind of behaviors and this willingness for military leaders to exceed their authorities and ignore authorities of the civilian officials appointed over them … positions under the Constitution and laws of the country was not something that came to them on Jan. 8,” Wardynski said. “It was something that they had done for a while.”

According to Wardynski, there were “stunning” instances in which he saw, firsthand, high-ranking military officials exceed their authority.

“It was in and around the riots in D.C.,” Wardynski said. “Gen. Milley, as chairman of the Joint Chiefs of Staff – first thing to know, is he is a staff officer, he is an adviser, he’s not a commander – he ordered elements of the 82nd Airborne and the 10th Mountain Division to fly overnight to D.C. to Fort Belvoir and Andrews without consulting the Army chain of command and reaching around the chain of command to do that. I know that for a fact.”

Wardynski said McConville told him that he “would not be obeying any illegal orders from the president” amid several violent riots across the nation in the summer of 2020, particularly in D.C.

“That’s not something in 30 years of service in that uniform I thought I’d ever hear,” Wardynski said. “My interpretation of that was he was talking about any use of the Insurrection Act by the president.”

The Insurrection Act of 1807 allows a president to deploy U.S. militarized forces and National Guard troops should there be extreme civil disobedience or an insurrection.

“There was a lot of talk about governors and mayors not enforcing the law,” he added, providing context to the nature of ongoing events at that time. “A lot of Secret Service agents were hurt at the White House, a lot of national guardsmen were hurt at the White House, at one point it was reported that they evacuated the president to the emergency operations center, and of course Milley ordered these two units flown to D.C.”

Wardynski said that McConville repeated that he would “not obey illegal orders from the president” in October 2020, which prompted Wardynski to call his lawyer, the number-three attorney for the Army at the time, to advise him as to what was going on and saying he was concerned they would refuse an order of the president in regard to the Insurrection Act.

“My impression is, for some time, these people had no intention of supporting the president,” Wardynski noted. “Milley, in staff meetings, was routinely a bully. He would sit at the head of the table with the secretary, the secretary would say we’re going to do the following, and Milley would look at the gathered staff and tell them, ‘Let me tell you what the secretary just said’ and it was pretty much something different.”

Wardynski also noted that Milley, who he was around multiple times for meetings, went into his portfolio on multiple occasions without prior approval.

“He reached into my portfolio at least three times without my authority and then came to me for sort of forgiveness afterwards, which he did not get,” Wardynski said of Milley, whom he described as a “manipulator.”

Wardynski said Milley’s “business with the nuclear weapons and the nuclear command and control is part of a pattern of behavior.” “I believe it reached, at least, across the top of the Army in military leadership,” Wardynski added.

Neither Milley nor McConville responded to Fox’s requests for comment.

Milley has already said he thought his contacts with the Chinese were normal, with his spokesperson saying he had regular contact with them. So Wardynski raises even more questions about how long all this has been going on and where else Milley may have been exceeding his authority. Not to mention how many other people were acting this way.