Giuliani: Photos on Hunter Biden’s Hard Drive Will ‘Shock the Hell Out of You’ 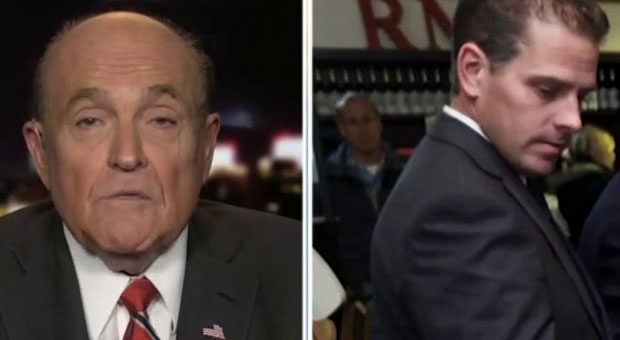 Giuliani: Photos on Hunter Biden's Hard Drive Will 'Shock the Hell Out of You'

During FNC’s “Fox & Friends,” Giuliani said he and his lawyer were sent Hunter’s hard drive, which has since been authenticated.

The former mayor then claimed the “confidential information” and photos on the hard drive are “disgusting” and will “shock the hell out of you.”

“Some of those pictures on it can only have come from him. And I will tell you why I know it for sure,” he added.

“I have about 10 pieces of confidential information nobody knows except me and Hunter Biden,” Giuliani said.

Have your say – ⇓ Hit the comments below ⇓

“You know, I investigated cases for 50 years,” Guiliani added.

“Every one of those hits the mark.”

“I have an anonymous source that reports on a meeting at the State Department, which would violate the Foreign Agent Registration Act.”

Ladysmith Millionaire: How to Get Rich with Bitcoin, Without Buying Bitcoin
Daily Finance
Ads by Revcontent

“And Hunter Biden was taken in the back door and kept off the books. The gentleman who was involved in it and who told me about it had the date,” he said.

“He’s had that for a year and a half. That very date shows up in his emails. There are five emails setting up that appointment that date, that exact time,” he added.

“I’ve got five of those if anybody cares to examine. They are not even disputing it. This is Hunter Biden’s emails, texts, and really, the photographs will shock the hell out of you,” Giuliani continued.

“Those photographs are disgusting, and they make him a national security risk for the United States of America because every photograph I have, China has plus a lot more,” he said.

Earlier this week, an investigation was launched by The Senate Homeland Security Committee into Hunter Biden’s emails leaked from his laptop.

The contents of Hunter Biden’s hard drive were given by a computer store owner, who maintains he copied data from his laptop after the former vice president’s sons handed it in for repair.

The New York Post has since published material from the computer, including images and videos depicted sexual acts and heavy drug use.