GOP Fundraising Text: You’re A ‘Traitor’ And ‘Deserter’ Who Must ‘Prove Your Loyalty’ To Trump By Sending Cash To NRCC 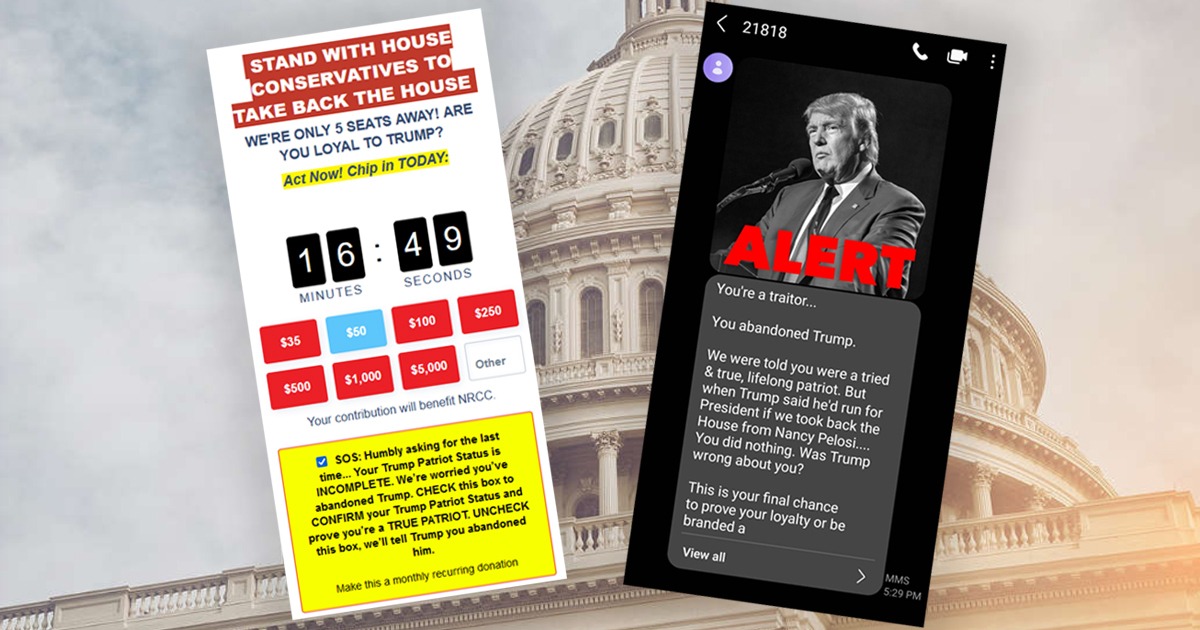 GOP Fundraising Text: You're A 'Traitor' And 'Deserter' Who Must 'Prove Your Loyalty' To Trump By Sending Cash To NRCC - National File

The National Republican Congressional Committee is sending threatening text messages to supporters of 45th President Donald Trump calling them “traitors,” and demanding they send money to the NRCC to “prove your loyalty or be branded a deserter.” None of the funds go to President Trump, and prospective donors are rerouted directly to the NRCC’s donation page, which features more bizarre messages such as “Your Trump Patriot Status is INCOMPLETE.”

In the text messages, prospective donors are told, “You’re a traitor… You abandoned Trump. We were told you were a tried & true, lifelong patriot. But when Trump said he’d run for President if took back the House from Nancy Pelosi…. you did nothing. Was Trump wrong about you. This is your final chance to prove your loyalty or be branded a deserter. We’re giving you one final chance to stand with Trump. You only have 17 min >>>.” 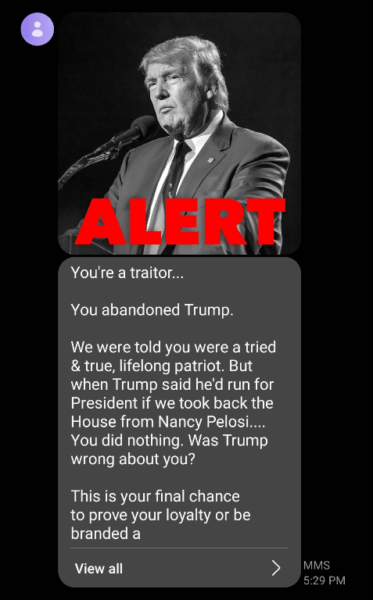 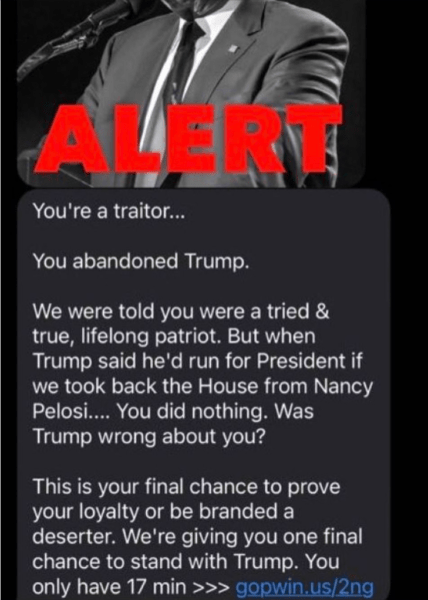 Users are then redirected to an NRCC page with a ticking clock widget using the WinRed fundraising platform that features more alarmist messaging such as “SOS: Humbly asking for the last time… Your Trump patriot Status is INCOMPLETE. We’re worried you’ve abandoned Trump. CHECK this box to CONFIRM your Trump Patriot Status and prove you’re a TRUE PATRIOT. UNCHECK this box, we’ll tell Trump you abandoned him.”

Directly above this message is a line of text that states, “Your contribution will benefit NRCC.”

President Trump has filed multiple cease-and-desist letters against various Republican donors and politicians using his name and likeness to reel in small-dollar donors, starting in March of this year.

Kevin McCarthy, the top ranking Republican in the U.S. House of Representatives, likely has at least some knowledge of fundraising efforts from the NRCC. National File has contacted McCarthy for comment and did not receive an immediate response prior to publication. The NRCC itself is chaired by Rep. Tom Emmer of Minnesota.

Published in Financial News, Political News, Trump and US News