How CIA hunted 9/11 mastermind al-Zawahiri for more than 20 years before dicing him with two twin blade Ninja missiles when he stepped onto his Kabul safehouse balcony at 6:18 a.m. 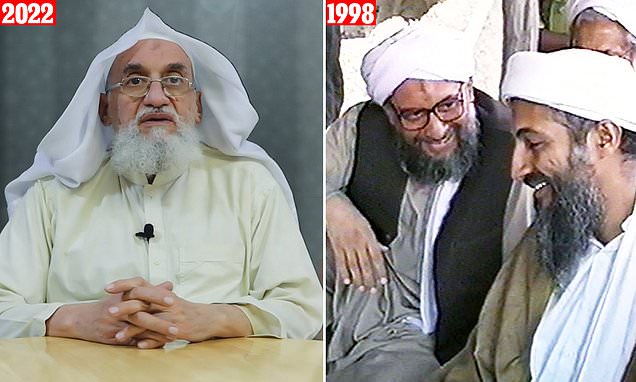 Labeled by US officials as Osama bin Laden's number-two, al-Zawahiri, 71,a key plotter of the…

By CHRIS PLEASANCE FOR MAILONLINE

It was 6:18 a.m. on Sunday and the sun was still rising over the Afghan capital of Kabul when an American MQ-9 Reaper drone – circling up to 50,000ft overhead – fired two R9X ‘Ninja’ Hellfire missiles at a house in the city’s upmarket district of Sherpur.

Ayman al-Zawahiri, Osama bin Laden’s former deputy and leader of the al Qaeda terror group since his master’s death 11 years before, had just completed his morning prayer – the second of the day – and was watching the dawn from his rooftop balcony in keeping with a well-worn routine.

Moments later, the 71-year-old was no more, pulverized into oblivion by the R9X’s 100lbs reinforced metal warhead and six katana-like blades that would’ve silently popped out of the fuselage moments before impact…