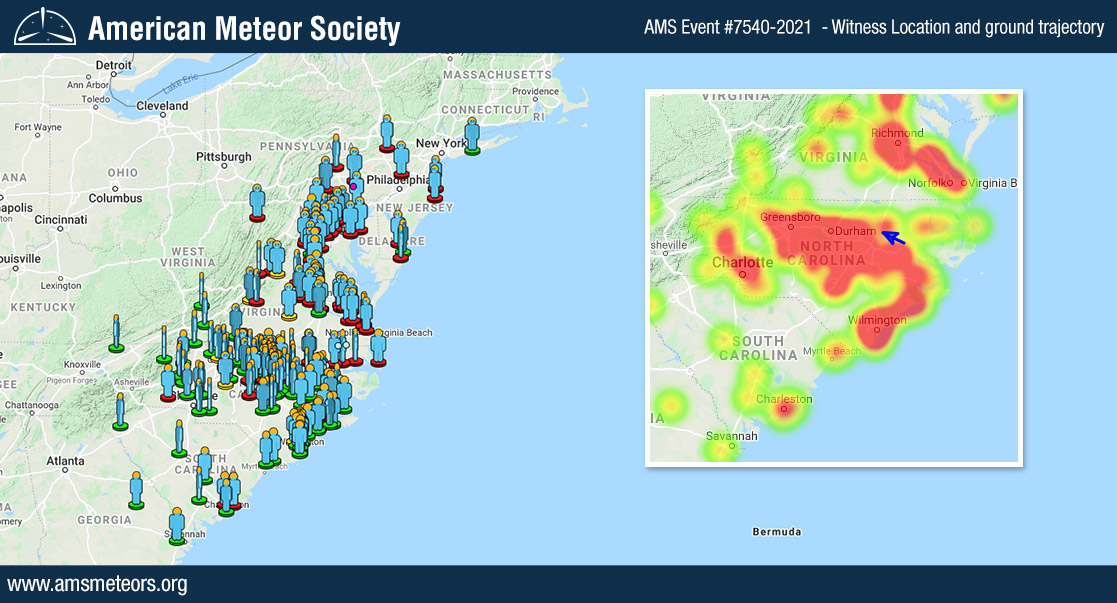 No, this is not a report of the launch of the Falcon 9 rocket carrying the Space X Crew Dragon in its rendezvous with the International Space Station.

Incredibly, nearly all of the witnesses were outside to view the launch of this rocket when an incredibly bright Taurid fireball flashed through the sky.

For many of the witnesses both the rocket and the fireball were visible simultaneously.

So far the American Meteor Society (AMS) has received 234 reports of this fireball.

Analysis of the eyewitness accounts posted on the AMS, combined with data from a NASA camera located in western North Carolina and other publicly accessible videos indicate that the meteor first became visible 48 miles (77 km) above Greenville, North Carolina.

At its brightest, the fireball rivaled the Full Moon, suggesting it was caused by an object roughly 45 pounds (20 kg) in weight and 10 inches (25 cm) in diameter. The low speed could imply an asteroidal origin.

If seen out of the corner of your eye, a meteor may appear to give off a flash of white light, similar to the way stars appear. However, meteors can appear in a variety of colors if viewing conditions are clear or if they are captured in a photograph.

For example, meteors made from primarily calcium will give off a purple or violet color, while those made out of magnesium will appear to have a green or teal color.

What a meteor is made out of is not the only factor that determines the color that it appears. The speed at which the meteor enters the Earth’s atmosphere can also affect the color.

The faster a meteor moves, the more intense the color may appear. Among fainter objects, it seems to be reported that slow meteors are red or orange, while fast meteors frequently have a blue color.

Several thousand meteors of fireball magnitude occur in the Earth’s atmosphere each day. The vast majority of these, however, occur over the oceans and uninhabited regions, and a good many are masked by daylight. Those that occur at night also stand little chance of being detected due to the relatively low numbers of persons out to notice them.

Additionally, the brighter the fireball, the more rare is the event. As a general thumb rule, there are only about 1/3 as many fireballs present for each successively brighter magnitude class, following an exponential decrease.

Published in NASA, Nature and US News