Imagine Not Being Able To Go To The Grocery Store To Buy Food If You Don’t Get ‘The Kill Shot’: More Sinister Signs They’re Planning On Tightening The Screws Down Upon All Of Us In 2021

By Stefan Stanford – All News Pipeline – Live Free Or Die

While the US Constitution and the Bill of Rights may end up preventing government from mandating vaccines for the American people, every day we get more signs that businesses across the country and the world have no such intentions, with CBS 4 in Boston reporting a ‘Covid-19 vaccine passport’ may be required to travel in 2021 just one of the latest stories warning of what awaits us in the year ahead.

With Spain to keep a registry of ‘vaccine refusers’, sharing it with other EU countries, another indication of what the ‘travel ban’ ahead might look like overseas, we learn that here in America, music venues, sporting events and theaters might soon be ‘off limits’ to those who don’t get the vaccine.

And with many employers also requiring ‘the jab’ for their employees hinting at how bad it might soon get for people who work for someone else but don’t want to subjugate themselves to an unproven shot, this new story from Health Impact News sounds a major alarm, with doctors across the world warning people NOT to get the vaccine.as we also hear from those medical professionals in the video directly below. From this important Health impact News story before we continue.:

In an effort to combat Big Pharma Corporate Media and Big Tech censorship, doctors around the world are frantically trying to warn the masses of the devastating effects of the experimental COVID vaccines about to be mass injected into the unsuspecting public assisted by military forces around the world.

What could possibly motivate these doctors, nurses, scientists, and other health professionals to make such an impassioned plea? What do they have to gain by taking the time to educate the public on the hidden dangers of a new class of vaccine about to be inflicted upon the citizens of countries around the world?

They have NOTHING TO GAIN, and much to lose, including their careers, and possibly even their lives.

So why are they doing this? Why are these doctors and professionals being censored so much if the new COVID vaccines are in fact “safe and effective”? What is it that the media and the government are hiding that they don’t want the public to know?

They are doing this because they are doctors and scientists who actually understand the REAL science here, and who know the devastating potential consequences of those who choose to get this very toxic and dangerous vaccine, and they are trying to save as many people as possible from the carnage this vaccine is going to cause, which will include DEATH, brain injuries, life-long autoimmune disease, infertility, and more.

Please watch this video and their urgent pleas, and then share it with as many people as you can, because time is short!

So how do Americans react to this massive flood of conflicting information, with many in government and the mainstream media imploring people to get the vaccine no matter what but doctors all around the world warning us NOT to get it?

With ‘social engineers’ all across America and the world also now using ‘weaponized psychology’ to push these vaccines, what happens if they mandate ‘the jab’ just to go grocery shopping? Or to go to the bank or a doctors visit, or, God forbid, to a hospital in an emergency?

From this new story over at the Daily Bell we learn how ‘social engineers’ are using ‘weaponized psychology’ to push these vaccines, with an unprecedented rush to approve and introduce to the market vaccines that normally take ten or more years to develop, at a minimum, which is: a necessary precaution to screen for adverse reactions in human test subjects who receive them.

As their story reports, the COVID-19 vaccines currently in development across the globe will likely make it to market in less than a year from the starting line, a huge drop in safety standards from the ‘normal’ 10 years it takes to develop. Although the major ‘monkey wrench’ in ‘big pharma’s machinery’ is the widespread (and rightful) skepticism on the part of the public regarding the safety and/or efficacy of the eventual vaccine. From this Daily Bell story.:

That people will be harmed by the COVID-19 vaccine once it is introduced to the public is inevitable. All vaccines, which re-jigger the immune system to produce antibodies against the targeted pathogen, can cause adverse reactions in a small percentage of the populations that receive them — even the safest, most thoroughly vetted ones.

This scientific, physiological reality is not disputed even by vaccine advocates. In fact, in the last 30 years, the U.S. government (using taxpayer money) has compensated victims of adverse reactions to vaccines to the tune of $4.4 billion. The COVID-19 vaccine will be no exception in terms of the damage it will inflict – in fact, because of the rushed nature of the vetting process and the proposed population-wide vaccination regimen, it will likely be far more destructive than previous vaccines in terms of scale.

In a recent Gallup poll on Americans’ willingness to submit to a COVID-19 vaccine, a mere half of the respondents said they would be willing to receive the vaccine once it becomes available.

This hesitancy on the part of the American public poses a potentially unforeseen dilemma for pharmaceutical firms and their cronies in government, which have spent billions developing these vaccines at breakneck speed: how best to prod, cajole, shame, or otherwise manipulate the American citizenry into accepting the vaccine once it has achieved FDA approval?

We can already see several strategies at work in this regard; the PR campaign to promote COVID-19 vaccination is now approaching climax.

Humans are hardwired to seek inclusion in social groups. In earlier epochs, our survival depended obviously and heavily on the social groups to which we belonged. Although the material reality of life has changed dramatically for humans since the dawn of civilization, those social imperatives carved deep into our innate psychology have remained.

Social engineers know and understand the basic desire for social inclusion, and use it as a tool.

Humans intuit the in-group/out-group dynamic. We are sensitive to lines drawn between insiders and outsiders and, whether consciously or subconsciously, modify our behavior to fit the mold of the inside group. If atomized outsiders can be convinced that the “insiders” in society get vaccinated, they are more likely to adopt conformative behavior as a result.

With ‘mask nazis’ now appearing all across America, belittling and sometimes even attacking those who go mask-less in public places, it’s quite easy to see how this ‘social engineering’ is already being rolled out across America, with c-list celebrities claiming masks will protect you better than an AR-15 will while more and more signs emerge they want to ‘muzzle us’ permanently as Mac Slavo reported in this SHTFPlan story.

(ANP EMERGENCY FUNDRAISER: Due to unexpected medical and emergency repair bills, please consider donating to ANP to help keep us in this ‘Info-war’ for America at this most critical time in US history, during a time of systematic ‘big tech’ censorship and widespread Democrat corruption.) 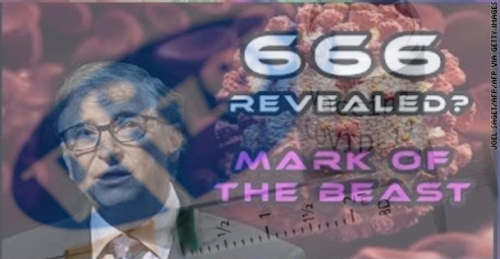 As their story continues, while Democrats for years have been screaming about ‘inclusion’, with their party website’s ‘Who We Serve’ page beginning, “Democrats are the party of inclusion. We know that diversity is not our problem—it is our promise”, they’ll be turning the screws even tighter to pressure people ‘into belonging’ to that group of ‘vaccine receivers’, with the very real possibility that ‘outcasts’ will be denied being able to purchase goods and services, leading us straight to the ‘mark of the beast’.

With the social engineers even now pushing that those who refuse to get vaccinated who later catch the disease and pass it on to ‘others’ could very well be ‘murderers’ should one of those ‘others’ die from Covid-19, will you get ‘the jab’ to satisfy your neighbors or co-workers, even if not mandated? Once again, from this important Daily Bell story.

By obvious insinuation, if you don’t comply with public health measures such as vaccinations to contain the spread of COVID-19, then you do not love and care for the elderly and other vulnerable populations – and are thus ripe to be excised from the social group. In this way, in exercising your inborn right to make your own medical choices, you risk becoming a pariah.

When the vaccine is marked as a pitch to end the pandemic once and for all and save millions of lives, the screws will turn even tighter. The pressure to vaccinate will further intensify, and those who do not wish to comply will be forced to make hard decisions about how committed they are to exercising their rights.

At which point, we may arrive at another related tactic the social engineers are sure to use: fear instillation – simple, yet effective. It goes something like “if you don’t get the vaccine, x millions of innocent lives will be lost.” You who refuse to vaccinate, in turn, would be responsible for those deaths. No one, save a psychopath, wants to be a murderer – or widely regarded by members of the in-group as one.

If emotional appeals fail, the social engineers will be forced to move onto physically alienating and ultimately excising the problematic out-group members from society.

The federal government, and its corporate partners, will set the agenda from on high, to be filtered down to smaller sectors of the economy and lower levels of government.

With a nurse in California who had already received the Covid-19 vaccination later getting the virus the latest major ‘snafu’ in the big pharma/government plans of rolling out this vaccine, why would anyone want to get the vaccine when there is still a very real chance that they’ll still get the virus and some point in time in the future?

While according to one ‘medical expert’, the body needs more time to build up protection following getting the vaccine as was reported in this Reuters story, with Christian Ramers, an infectious disease specialist with Family Health Centers of San Diego, telling ABC News that scenario was not unexpected, he also immediately pushed that ‘2nd dose’ which would allegedly push protection up to 95%, this for a virus that 99% of the people who get the virus will survive, anyways.

“That first dose we think gives you somewhere around 50%, and you need that second dose to get up to 95%,” Ramers added.

So while we’re definitely not medical doctors here at ANP, nor are we offering medical advice to anyone, we can definitely take and share the advice of doctors around the world as heard in the videos above and below while imploring everybody to do their own research and talk to their own medical doctors to determine what is best for you, with all of us different human beings and having very different medical problems and needs.

In the only video below, the Corbett Report takes a look at the future of vaccines, warning if the Gateses and the Faucis and other representatives of the international medical establishment get their way, life will not return to normal until the entire planet is vaccinated against SARS-CoV-2. Warning what many don’t yet understand is that the vaccines being developed for Covid-19 are unlike any vaccines that have ever been used on the human population before, we’re warned we’re now witnessing a complete transformation of vaccine technology currently taking place in research labs across the planet.