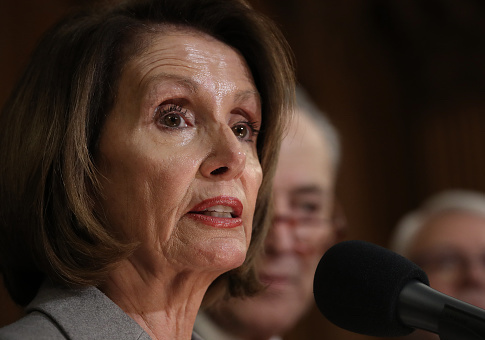 “Hard to imagine Trump doing a signing ceremony of anything with Speaker Pelosi at his side, and Democrats are the only ones agitating for gun control,” one staffer told the Free Beacon on Wednesday.

The inquiry, which House Speaker Nancy Pelosi (D.) officially labeled an impeachment investigation, will consume Washington for the weeks and months ahead, according to the sources. They also said it will be difficult to move key legislative priorities like a reworked North American trade deal and lowering the cost of prescription drugs, not to mention a passable gun control package.

“I think the impeachment stuff sucks up all the oxygen,” a second Senate staffer told the Free Beacon.

A third Senate staffer said gun control was something that wouldn’t be on the front burner at least “for a while” and that some staffers had already begun preparing for how to handle impeachment proceedings should they come.

“Policy and legal staffers got quick reminders in impeachment procedures yesterday but that doesn’t mean anything,” the staffer told the Free Beacon. “It’s more like, ‘well, if it happens, we better be ready.'”

Gun control activists and members of the media have applied immense public pressure to pass new gun control measures in the wake of mass shootings last month in Texas and Ohio. However, while polling has shown support for some of the measures pursued by gun control advocates, that support has declined even in polls taken shortly after the shootings.

Published in Gun Control, Political News, Trump and US News