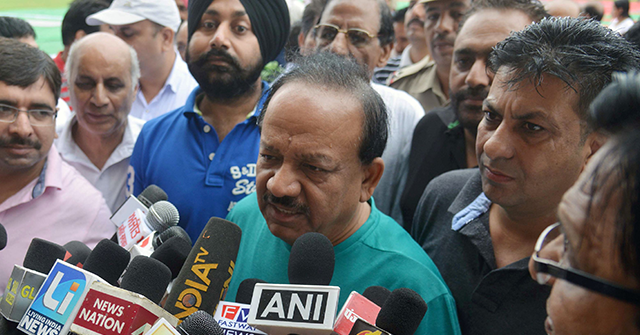 “Vardhan and his deputy Ashwini Chaube both resigned today ahead of Prime Minister Narendra Modi’s cabinet reshuffle, becoming the most significant casualties of a mega government reset seen by many as course-correction before key polls,” NDTV reported July 7.

“He has submitted his resignation,” an aide of Vardhan told Reuters on July 7.

Prime Minister Modi “is expected to name a successor” to Vardhan “later on Wednesday,” a source close to Vardhan told the news agency.

Vardhan and his former deputy Chaube are among several Indian federal government ministers that have resigned from their positions in recent days, according to NDTV.

Modi has ordered the major cabinet reshuffle amid recent criticism of his administration’s handling of a Chinese coronavirus resurgence within India. Vardhan led the Indian government’s response to the caseload spike, which killed hundreds of thousands of people in India within a span of weeks from mid-April through May. The public health crisis pushed India’s healthcare system to the brink and caused a shortage of medical oxygen and hospital beds nationwide.

“With [coronavirus] cases on the wane, the government’s next priority is to stave off a third wave of the virus. This hinges on the government’s vaccination plan, which, under the Health Ministry, is also seen to be floundering with the pace not picking up and supply of doses remaining a concern,” NDTV reported on July 7.

Prime Minister Modi and other Indian leaders, including Union Home Minister Amit Shah and the leader of India’s ruling Bharatiya Janata Party (BJP), J.P. Nadda, “carried out a detailed review of performances, especially of those who had a role in the Covid [Chinese coronavirus] fight” in the weeks leading to the new cabinet reset, NDTV noted on Wednesday.

“Forty-three ministers are being sworn in today as part of the cabinet reshuffle, the first in PM [Prime Minister] Modi’s second term,” according to the news site.

Modi’s approval rating dropped “from 73 percent on April 1 to 63 percent on May 11,” according to the U.S.-based data intelligence company Morning Consult. Observers interpreted the dip in Modi’s public approval as an indication that Indians were unhappy with the prime minister’s response to the Chinese coronavirus resurgence in April.