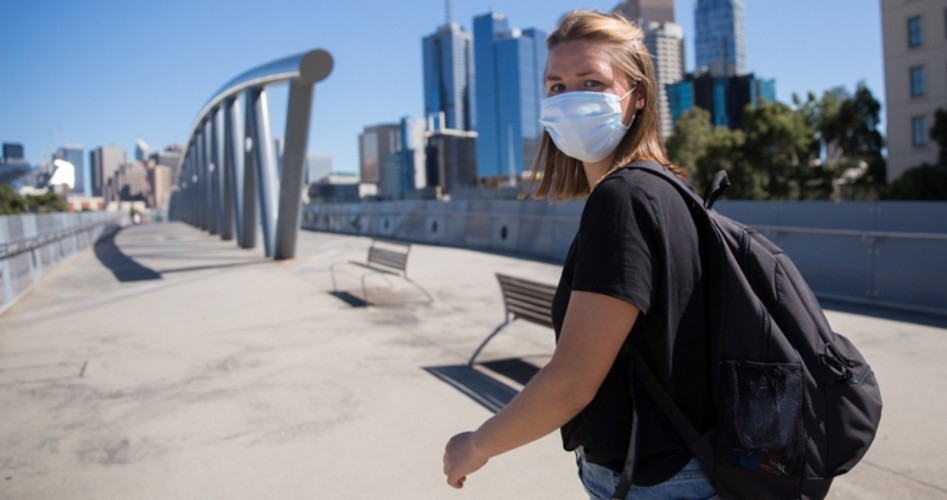 How far will the COVID “saviors” go to save us? How about arresting pregnant moms in their PJs, conducting warrantless searches, imposing harsh quarantines and 8-5 curfews, employing surveillance drones, dishing out exorbitant fines, setting up police roadblocks/checkpoints, smashing automobile windows and dragging occupants out of their vehicles, and much more?

It is increasingly apparent that many politicians, bureaucrats, and medical authorities are ready and willing to go “Full Wuhan” and adopt communist China’s police state methods to combat the coronavirus. Yet such draconian methods were not used to fight other pandemics that claimed many more lives, such as the 50 million lives lost to the Spanish Flu during 1918-1920.

One government that has most enthusiastically embraced Beijing’s totalitarian ways is the administration of Daniel Andrews, the premier of Victoria, Australia’s second-most populous state and home to the country’s second largest city, Melbourne (population five million). His extreme lockdown measures have stirred fierce opposition in Victoria, which bolstered the state parliament’s resolve to block his plan to extend his “state of emergency” powers for 12 months. Nevertheless, on September 12, Andrews announced that he is extending his COVID-19 “state of emergency” for another four weeks.

Millions of viewers around the world have been shocked by a viral video showing Victoria’s COVID police invading the home of a young pregnant mother and handcuffing her in her pajamas, in front of her young children. Her crime? She had posted a call on Facebook urging people to attend a peaceful protest against the ongoing harsh lockdown of all Victoria ordered by the Andrews government. Mind you, she had not actually done anything. She had not gathered with others, marched, protested, rioted, attacked police, or burned buildings (as tens of thousands of others had done recently in Melbourne and other Australian cities for Black Lives Matter protests — with government blessings).

Zoe Buhler, an expectant mother with two small children, had merely stroked a few keys on her keyboard while in her pajamas and was livestreaming on Facebook when Andrews’ COVID Gestapo arrived at her door to arrest her for “incitement.” Fortunately, livestreaming video captured the frightening ordeal and exposed the glaring hypocrisy of the emerging COVID police state, as well as the dangerous path that once-free nations are headed on toward a global medical dictatorship.

The visibly shocked and distressed Buhler tells the COVID-masked police officers, “I don’t really understand what I’ve done wrong. This is ridiculous. I didn’t realize I was doing anything wrong.”

She repeatedly pleads with the officers not to traumatize her children and to simply allow her to delete her Facebook post. She also repeatedly states that she is getting ready to go to an ultrasound appointment for her pregnancy checkup. “I have no idea why you guys are doing this,” she tells officers. “My two kids are here. I have an ultrasound in an hour. I’m happy to delete the post.” Her pleas were to no avail. COVID “justice” must be done. The public must be protected!

The outrageous, over-the-top arrest of Buhler has caused widespread pushback to many of the other extreme pandemic policies of Premier Andrews — as well as opposition to similar policies by other government leaders around the world. Former prime minister Tony Abbott has accused Andrews of running a “health dictatorship.”

The “pregnant mum arrest” came on the heels of an earlier viral video of COVID police choking and arresting a non-mask-wearing young woman on a city sidewalk. It later turned out that she had a medical exemption, which her companion repeatedly told the police during the altercation/arrest.

It was a different matter altogether, however, when authorities across Australia (along with pusillanimous pols around the world) bowed to political correctness and accommodated the mobs of BLM, Inc. Then it was “social justice” must be done: Go ahead, no need to enforce social distancing, mask mandates, lockdowns, etc., since the civil disobedience is for a “good” cause.

Achtung! Your Papers, Please!However, Victorians who participated in a “Melbourne Walk for Freedom” were denounced as “selfish” and were arrested and fined. They also were accused of endangering fellow Victorians by causing strained police resources to be diverted, even though the lockdown protest crowds were only a tiny fraction of the size of the Black Lives Matter protests.

“If people still choose to ignore our warnings and attend any of these protest events they should be prepared for a strong police presence in the city and surrounding areas,” Victoria’s Assistant Police Commissioner Luke Cornelius said. “These are significant police resources drawn from across our uniform members and our specialist capabilities, these are resources that are unfairly being taken away from local communities that would otherwise be directed to keeping the community safe.”

Sounding a newly discovered tough-on-protests theme, he warned: “We have to direct those resources towards containing the behavior of a small number of selfish Victorians. Don’t take us for fools. We’ll call you out and hold you to account.”

“We’ll have no hesitation in issuing the $1652 fine to people who are engaged in flagrant breaches of the stage-four restrictions,” Cornelius insisted, noting that he is “sick” of having to tell “selfish” Victorians not to illegally protest. “It’s incredibly frustrating and if people were less selfish and a little bit more grown up we wouldn’t have to keep doing this,” the police commissioner said.

Cornelius, however, contradicted himself by justifying the arrest of Buhler (who was protesting online), while simultaneously telling protesters that they should just stay home and “protest online.”

“By all means, protest online,” Cornelius said. “Be the keyboard warrior. Say all sorts of unpleasant and uncharitable things about people urging you to behave sensibly, but do it online. Don’t leave home to do it.” (Unless you’re a BLM protester, he might have added.)

But Zoe Buhler was at home. The pregnant mother of three was “protesting online.” She was being a “keyboard warrior” when Commissioner Cornelius’s officers invaded her home. Nevertheless, Cornelius said the raid was completely justified.

“The optics of arresting someone who is pregnant is terrible,” he admitted. But went on to comment, “While this deadly virus doesn’t discriminate, we won’t discriminate. And we can’t discriminate in holding people to account.”

Why are people in Victoria revolting? After months of some of the most extreme lockdown regimentation outside of China, they are fed up. Victoria’s “COVID-19 Restrictions” include:

• Closure of all “non-essential” business, which means most businesses, as well as churches, schools, colleges, universities, clubs, parks, beaches;

• Permission to leave one’s residence allowed only for shopping for food and essential items, care and caregiving, daily exercise, and “essential” work;

• Only one person per household may shop per day

• Shopping only within a three-mile radius of one’s residence;

• Outdoor exercise for only one hour, once per day, and only within three-mile radiuss of home;

• A “Worker Permit” signed by one’s employer required when travelling to and from work;

• People may only gather in public with one person from outside their home.

Premier Andrews’ draconian COVID-19 restrictions include huge fines for employers and employees that run afoul of the government edicts:

Penalties of up to $19,826 for individuals and $99,132 for businesses will apply to employers who issue worker permits to employees who do not meet the requirements of the worker permit scheme or who otherwise break the rules.

There will also be on-the-spot fines of up to $1,652 for individuals and up to $9,913 for businesses for anyone who breaches the scheme requirements. This includes employers, and employees who do not carry their worker permit when travelling to and from work.

Police and Australian Defense Force troops in military attire have been tasked with setting up check points to stop tens of thousands of Victoria residents to check their papers and permits. The Daily Mail reported, “By the end of May, police had issued 5,957 fines to Victorians who failed to observe coronavirus rules. The $1,652 infringement notices generated more than $9 million.”

Australia’s ABC News reported on September 2, “Police have issued almost 5,800 fines in total since August 3, an average of 186 infringements a day.” And, it noted further: “Police have also handed out more than 900 fines in the past month for people failing to wear a face mask or face covering in public. Those fines are $200 each, amounting to more than $181,000 over the past month.”

Bring in the Drones!

In addition to the heavy presence of police and military personnel, Andrews is making use of drones and facial recognition software paired with ubiquitous public cameras. On August 17, Melbourne’s Channel 7 TV reported, “Police are preparing to launch their aerial arsenal as part of a crackdown on COVID rule breakers. High powered drones will be used to find people not wearing masks, and cars too far from home.”

Police are preparing to launch their aerial arsenal as part of a crackdown on COVID rule breakers. High powered drones will be used to find people not wearing masks, and cars too far from home. https://t.co/5zYfOfohG3 @tdolling #7NEWS pic.twitter.com/Yy84UBTH0V

Former Australian prime minister Tony Abbott, speaking in London to the think-tank Policy Exchange, accused Premier Andrews of attempting to use his COVID-19 “state of emergency” declaration to expand his powers into a “health dictatorship.”

“From a health perspective, this pandemic has been serious. From an economic perspective, it’s been disastrous,” Abbott said. He also pointed out that the latest outbreak which Andrews has cited as justification for his “emergency” was caused by Andrews himself, who initiated disastrous hotel quarantine policies that have ended up spreading the virus in Victoria.

“There is absolutely no doubt that we had got to the stage in Australia of virtually zero community transmission, until the extraordinary ineptitude of the Victorian Government in the management of its hotel quarantine system produced what has been the biggest outbreak in Australia so far, responded to with the most severe lockdown tried anywhere in the world outside of Wuhan itself,” Abbott said.

Premier Daniel Andrews’ mimicking of China’s brutal Wuhan lockdown policies does not surprise anyone familiar with his close ties to Beijing and his many ties to Chinese Communist Party (CCP) agents in Australia. Andrews, leader of the far-left Labor Party, has stirred serious security concerns with Australia’s national leaders, as well as the Trump administration, as a result of signing Victoria on to China’s Belt and Road Initiative (BRI, also known as One Belt-One Road, OBOR), Xi Jinping’s signature trillion-dollar program aimed at building a trade and infrastructure network connecting China with the rest of the world. The BRI/OBOR initiative has been heavily promoted for the past several years not only by the CCP but also by President Barack Obama, Secretary of State Hillary Clinton, and all the usual Wall Street globalists, as we have previously reported (see here and here).

Premier Dan Andrews’s close ties to some of China’s top agents in Australia have caused growing alarm for the past several years. Dr. Clive Hamilton, a professor at Charles Sturt University in Canberra and a leading critic on this matter, has repeatedly drawn attention to the CCP agents who serve as Andrews’ advisors. Professor Hamilton, the author of several books on China, including Hidden Hand: Exposing How the Chinese Communist Party Is Reshaping the World, has pointed out that advisors Marty Mei and Mike Wang, and beauty pageant queen Jean Dong are leading agents in the CCP’s United Front influence network in Australia.

Published in Coronavirus, Crime, Political News and US News