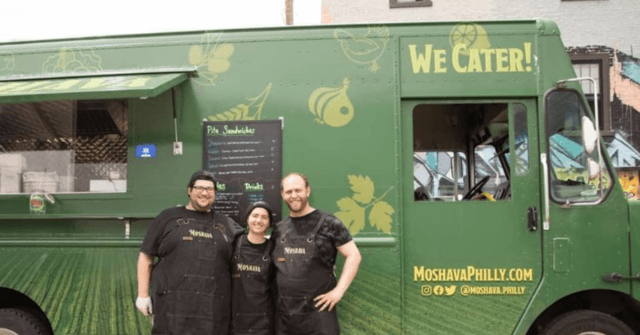 Thousands of people complained after organizers of “A Taste From Home,” a Philadelphia street food festival held Sunday, excluded an Israeli food truck named Moshava in response to pressure from left-wing anti-Israeli activists.

In an Instagram post on Saturday, Moshava shared the message from the festival’s organizers, “Eat Up The Borders,” which stated that “we decided to remove one of our food vendors for Sunday’s event so that we could deliver an optimal experience for all. This decision came from listening to the community we wish to serve and love.”

Moshava added in the comments:

We have some unfortunate news to share with all of you. We won’t be attending “The Taste of Home” event, this Sunday, on Father’s Day. We are deeply saddened by this. The organizers of the event heard rumors of a protest happening because of us being there and decided to uninvite us from fear that the protesters would get aggressive and threaten their event. We were really hoping that the organizers @eatuptheborders and @sunflowerphilly would step up to the plate and defend local, small and immigrant based businesses, no matter where they are from (as per their so called “mission statement”) but By the looks of it fear, violence, and intimidation got the best of them.

We really do hope that in the future you don’t succumb to such antisemitic and dividing rethoric and keep true to your words of a safe environment for all religions and nationalities- not just all of them except Israeli and Jewish ones.

Nonetheless we will be keeping our promise to give back to our community and will be donating 50% of our proceeds on Father’s Day to the family of Pedro Salazar. #spreadlovenothate

Pedro Salazar was an employee of the Zahav restaurant in Philadelphia who passed away.

[T]he bid to calm controversy by Eat Up the Borders, the event’s organizer, backfired: After announcing the removal, thousands of people replied, with varying levels of vitriol, questioning why the group associated a chef living in Philadelphia to the policies of a country nearly 6,000 miles away.

Eat Up The Borders took its Instagram account offline early Sunday morning, under an onslaught of at least 4,200 critical comments, many from people directed to the page from various accounts devoted to chronicling and responding to antisemitism. At least one prominent account warned the organization to bulk up security at Sunday’s event.

Moshava posted a follow-up, stating that it had not intended “to boycott or cancel anyone” by sharing news of its exclusion.