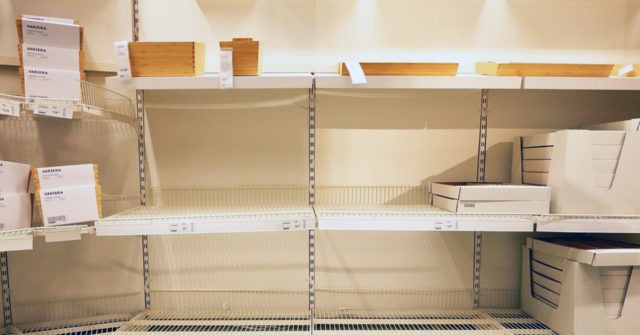 Empty shelves will be more common in North America, followed by Europe, according to company…

IKEA, the world’s largest furniture seller, said recently that many of its products are missing from its stores around the world.

The company said that store shelves sit empty with many of its flatpacks and housewares items stuck are warehouses, waiting for trucks to distribute them. The United States and elsewhere has been struck by a shortage of drivers as many never returned to jobs following the reopening of the economy.

The company said the problem is global but that North American stores will likely suffer the biggest shortages, followed by stores in Europe.

The company sees shortages last into next year, at least.

“In general we are struggling to have the goods in the right place at the right time,” a company official told the Wall Street Journal.

“We actually foresee that the availability and raw materials challenge will continue for the better part, if not the whole, of [the financial year to the end of August],” Jon Abrahamsson Ring, chief executive of Inter Ikea, owner of the Ikea brand, told the Financial Times. “This is here for a longer period than we thought of at the beginning of the crisis.”

Published in Financial News, US Economy, US News and World News