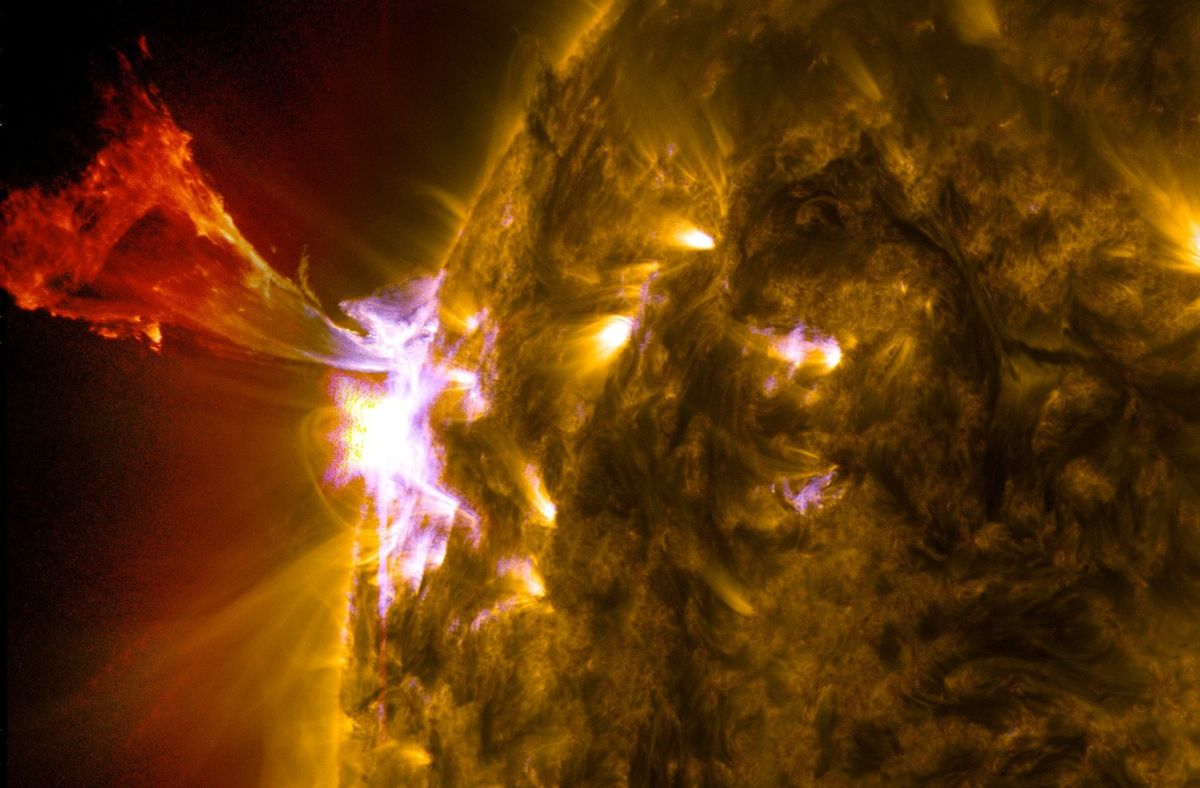 The category G3 storm could cause some satellite navigation problems, and auroras as far south…

The sun belched up a large flare of charged particles on Oct. 28, and now that electric wind is barreling toward Earth as a strong geomagnetic storm.

The storm — which ranks as a category G3 on the Space Weather Prediction Center’s (SWPC) 5-tier scale — is expected to reach Earth late on Saturday (Oct. 30), with effects continuing into Halloween (Oct. 31), according to a SWPC statement.

“Impacts to our technology from a G3 storm are generally nominal. However, a G3 storm has the potential to drive the aurora further away from its normal polar residence,” the SWPC wrote. “The aurora might be seen over the far Northeast, to the upper Midwest and over the state of Washington.”

Large solar flares, or coronal mass ejections (CMEs), are a routine type of space weather that occur when enormous blobs of plasma (electrically charged gases that make up all the stars in the universe) escape the sun’s atmosphere and ooze through space at hundreds to thousands of miles a second. (The current G3 storm is traveling at about 600 miles, or 970 kilometers, per second, according to SWPC.)

It typically takes a CME about 15 to 18 hours to reach Earth, where the blob slams into our planet’s magnetic shield, compressing the shield slightly. Charged solar particles then shoot down the magnetic field lines, heading toward the North and South Poles and bumping into atmospheric molecules along the way. The agitated molecules release energy as colorful light, creating auroras.

CMEs can also disrupt power systems and communications technology, depending on a given storm’s strength. For G3 storms, “intermittent satellite navigation and low-frequency radio navigation problems may occur,” according to SWPC.

Larger storms can pack a bigger punch, such as the infamous 1859 storm known as the Carrington Event, which disrupted Earth’s magnetosphere so severely that telegraph wires burst into flames. Future storms of this caliber could cripple the global internet, Live Science previously reported.

The sun is currently approaching a period known as the solar maximum — the most active part of its 11-year cycle. During this period, the sun’s magnetic field, which controls CMEs and other solar weather, is at its strongest, resulting in more and stronger solar storms. Other recent solar outbursts include a G2 storm that hit Earth on Oct. 11, and another series of G2 storms that reached the planet on Sept. 27.