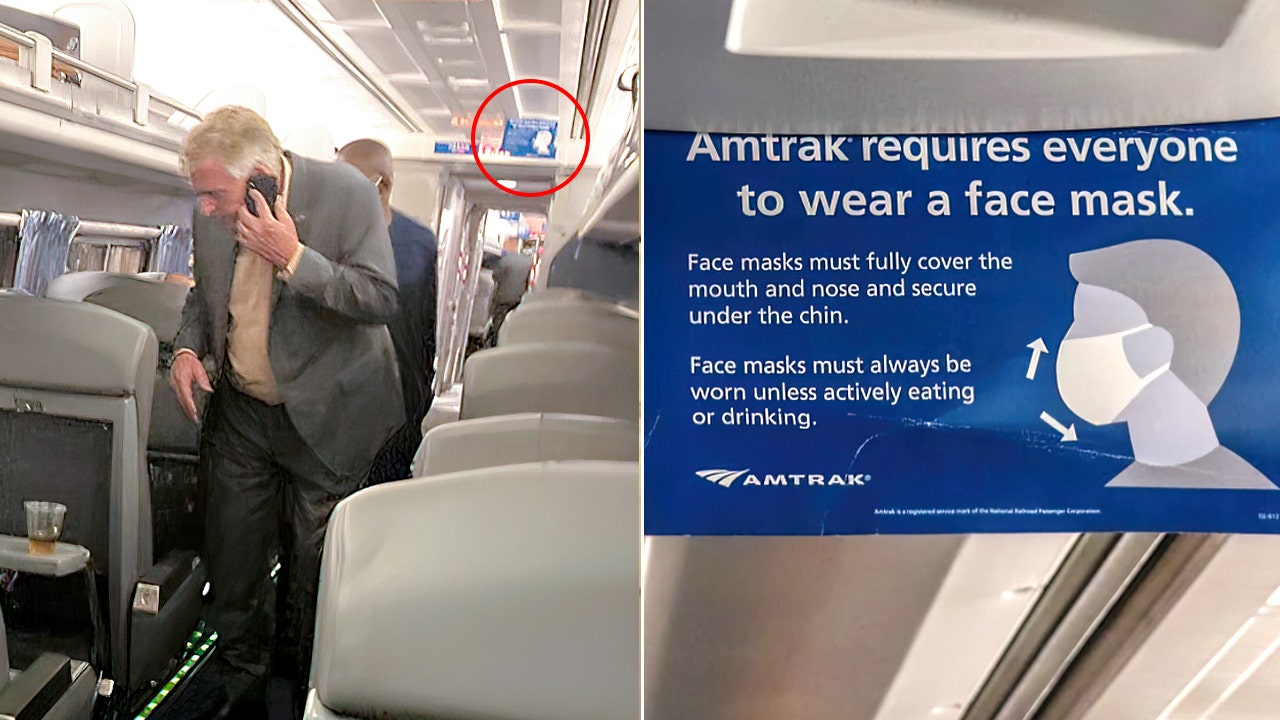 EXCLUSIVE: Virginia's former Democratic Gov. Terry McAuliffe, who is running to win back his seat…

EXCLUSIVE – Virginia’s former Democratic Gov. Terry McAuliffe, who is running to win back his seat in November, was seen maskless on an Amtrak train from New York to Washington, D.C., in late July – skirting federal mask mandates and Amtrak rules.

Fox News obtained photos of McAuliffe on a train from New York City’s Moynihan Train Hall at Penn Station on the night of July 29. An Amtrak passenger, who spoke to Fox News on condition of anonymity, took the photos, calling McAuliffe’s violation of the rules an “absolute double standard.”

The photo shows McAuliffe walking down the aisle of an Amtrak train, on a phone call, and not wearing a face covering. McAuliffe is seen standing under Amtrak’s sign stating face masks are required. The relatively empty train car does show a passenger in the distance wearing a mask, and the passenger behind McAuliffe with a white strap over his ear, signaling that he, too, was wearing a mask.

“Amtrak requires everyone to wear a face mask,” the sign reads. “Face masks must fully cover the mouth and nose and secure under the chin. Face masks must always be worn unless actively eating or drinking.”

Amtrak’s website also states: “Federal law requires all customers and employees to wear a mask at all times while onboard trains and in stations, regardless of vaccination status or state or local laws.”

“Refusing to wear a mask is a violation of federal law; passengers may be subject to penalties under federal law, denied boarding, removed from the train, and banned from future travel in the event of noncompliance,” Amtrak states.

The Centers for Disease Control and Prevention issued an order in January that required face masks to be worn by all people while on public transportation. That order also required all individuals to wear masks while at transportation hubs, including airports, bus or ferry terminals, train and subway stations, and other locations where people board public transportation in the United States.

The passenger who shared the photos with Fox News said they were waiting to board the train when they recognized McAuliffe across the station taking a phone call.

“My brain didn’t really move right away, but all of a sudden, I thought, that guy looks familiar,” the passenger said, adding that they “took a picture of him there while we were in line.”

The passenger said McAuliffe was “not wearing a mask on the escalator down to the platform,” saying he continued his phone call.

“We happened to be in the same train car, and I took the second photo. We took our seats, and I didn’t get up for the rest of the trip, so I can’t speak to what he did or did not do during the trip as far as wearing a mask.”

The passenger added that when the train arrived to Union Station in Washington, D.C., McAuliffe was still not wearing a mask. The passenger, though, said they could not get a photo of him.

“I remember thinking I should say something to him, but didn’t want to start some incident or viral issue,” the passenger said.

“I’m vaccinated, but Amtrak says put a mask on, so I put a mask on,” the passenger said. “And when I looked around, he kind of highlighted himself because everyone else was wearing a mask.”

He added: “You have an individual who wants to be a leader of a state here in the United States, and it is an absolute double standard. You have to lead by example.”

The passenger went on to say that Americans “are tired of being told to do something by our leaders, and they don’t follow it themselves.”

“Whether you agree with it or not, it is easy enough to throw a mask on for a little while,” the passenger said. “It seems to be a constant – whether you’re the governor of California or a member of Congress, or someone running for governor of Virginia.”

The passenger was referring to House Speaker Nancy Pelosi, D-Calif., who was seen last year at a hair salon in San Francisco, without a mask, despite local ordinances keeping salons closed; and California Gov. Gavin Newsom, who was seen dining indoors without a mask last year, despite local COVID-19 guidelines. Newsom is facing a recall election Tuesday, as Californians attempt to unseat him over his handling of the COVID pandemic.

The passenger added: “There is no accountability with politicians these days and it frustrates people.”

The McAuliffe campaign did not comment on the photos of the candidate, but slammed his Republican opponent, Glenn Youngkin, saying that he has “an extensive history” of not following CDC mask guidance.

“Glenn Youngkin has shown Virginians he will be a failure when it comes to controlling this pandemic and rebuilding Virginia’s economy,” McAuliffe spokesman Renzo Olivari told Fox News. “Glenn has an extensive history of not following CDC mask guidelines dating back to the worst periods of the COVID-19 pandemic, and he peddles such dangerous anti-vaxx and anti-mask rhetoric that doctors in Virginia have begged him to stop undermining measures that will prevent the spread of this virus.”

Olivari added: “Terry is the only candidate in this race who has a plan to get Virginians vaccinated, keep our kids in schools, and create a better future for all Virginians.”

McAuliffe, in an op-ed published in the Washington Post in August about defeating the novel coronavirus, wrote that he “will always lead by example,” and added that “taking this virus seriously is not a partisan issue it’s a leadership test.”

McAuliffe has repeatedly posted on Twitter, reminding individuals to wear masks to protect against COVID-19 and to follow CDC guidance.

As for Youngkin, he has attended some events without wearing masks or face coverings. There is no Virginia law requiring masks, but Virginia currently says individuals should wear a mask in public indoor settings in areas of substantial and high transmission of COVID-19.

Virginia Beach currently is an area of high transmission.

Virginia follows the federal order for both vaccinated and unvaccinated individuals, saying individuals “must wear a mask when using public transportation… as well as in indoor transportation hubs, such as airports and stations.”

“Youngkin follows the law and respects those around him by wearing a mask whenever and wherever it is necessary,” Youngkin campaign spokesman Christian Martinez told Fox News.

“Terry McAuliffe said he wants to make life difficult for everyone else, but apparently he himself has difficulty taking the pandemic seriously and following federal law,” Martinez said. “Just like all the other politicians with their mandates, he thinks the rules are for everyone else.”

Martinez added: “McAuliffe loves to play politics with COVID, but he failed his own leadership test when he traveled to a COVID hot spot, demonstrating once again that he is all talk and no action.”

McAuliffe is facing off against Youngkin for governor on Nov. 2.