Migrants are being ‘radicalised’ by NGOs pushing them to raise their demands, warns UN refugee official after rescue ship trying to dock in Italy snubbed Spanish offer of asylum 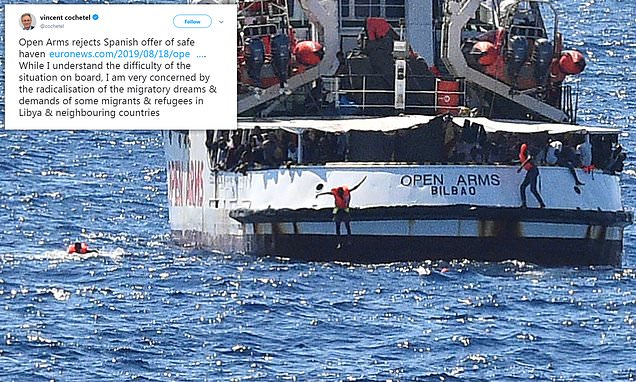 'Demands of some migrants' is a serious concern, warns UN official

Vincent Cochetel, the UN's special envoy for the Central Mediterranean, warned in a tweet this…

A UN refugee official has expressed concern over the increasing ‘demands of some migrants’ after dozens of them refused to dock in Spain in favour of Italy.

Vincent Cochetel, the UN’s special envoy for the Central Mediterranean, warned that migrants were becoming more radical as a result of NGOs pushing them to raise their demands.

He was commenting on the Open Arms migrant rescue ship which had been trying to reach the Italian island of Lampedusa for weeks.

The Spanish rescue boat was stuck in a stalemate with the Italian government for 20 days as Rome refused to let it dock.

Spain offered to let the migrants disembark in Mallorca but Open Arms rejected.

The non-profit repeatedly said that the situation on board was desperate and some migrants were suicidal.  READ MORE…