BLACK SUPREMACY: First they came for the whites, but coloureds did nothing because they were not white, but now they are coming for the coloureds too! As we have predicted for years, colored people are now sitting with the same problem as white people in South Africa: they are not bantu. Ivan Cloete, a coloured man, was given 24 hours to move off the state farm Colenso, near Darling in the Western Cape, where he was previously placed by the Department of Rural Development. This is the third time Mr Cloete has been ordered to vacate a state farm, where he was placed by the ANC government and in all 3 cases Mr Cloete was being replaced by an African male or female!

A black supremacist project has been exposed in the Cape, where corrupt black officials of the Department of Rural Development and Land Reform are turning a 700,000 hectare scheme to place non-white farmers on land in state possession, into a race based (for blacks only) party political reward scheme. So in other words you have to be black and ANC to get a state farm according to this 700,000 hectare scheme. Black supremacy meets cadre deployment.

Annette Steyn of the DA has told Rapport newspaper that she has received several complaints where black officials are evicting emerging farmers who were on the land in question already, and then giving the land to people connected to the ANC and its erstwhile armed wing MK. This now seems the norm as analysis shows that the new land occupiers are always black Africans connected to the ANC. Exactly the same thing happened under Mugabe in Zimbabwe. Cronyism.

Steyn also told Rapport that some emerging (emerging refers to non-white in liberal and ANC jargon) are being evicted from state farms, which were not even on the list of farms earmarked for the 700,000 hectare scheme to begin with. The emerging farmers who have been evicted to make room for ANC connected black cadres, include both black and brown emerging farmers who have been trying for some time to establish themselves.

Ivan Cloete, a brown man, was given 24 hours to move from the state farm Colenso near Darling in the WC where he was previously placed by the Department of Rural Development. This is the third time Mr Cloete has been ordered to vacate a state farm where he was placed by the government and in all 3 cases Mr Cloete was being replaced by an African male or female!

Keep in mind that black Africans are not historically from the Western Cape whilst the brown Khoisan people has never known another place than the south of Africa and especially the Western Cape.

Brown/Khoisan people are regarded as the first or aboriginal people of South Africa whilst at the time of the arrival of Jan van Riebeeck in South Africa, the nearest black tribes were well over 1,000 km away to the East, in the vicinity of the Kei River in the Eastern Cape. When black Africans say they want their land in the WC, they are laying claim to something which their forebears never had. The ANC to this day refuse to acknowledge the Khoisan people as the “First Nation” even though the UN has demanded that they do!

Mr Cloete has been trying for 10 years to get a farming business going with state help, and why should he not? Is he not also South African and a descendant of the aboriginal people of South Africa?

In November 2012 Mr Cloete was jointly placed on the state farm Bellevue near Paarl with the MK veteran Theo Sibeko. After 4 years of conflict between Mr Cloete and Sibeko the state granted a rental agreement for another state farm, Gelukwaarts near Porterville, to Mr Cloete. Sibeko remained on Bellevue.

On Gelukwaarts he found a woman named Nonthando Nqxumeshe was already occupying the farm and another conflict ensued. Mr Cloete was harassed on a constant basis and his farming equipment damaged. On 7 March 2019 a group of black males arrived at the farm house on Gelukwaarts.

The men said Nqxumeshe offered them the house to stay in. They set upon Mr Cloete and cruelly assaulted him by beating him with knobkieries, resulting in Mr Cloete being hospitalized.

The Department did not resolve the situation by acting against Nqxumeshe and the harassment continued, until The Department eventually moved Mr Cloete to the Colenso farm from where he is now being  evicted.

Mr Cloete was under the mentorship of Andre Kirsten, an established white farmer.

Last Monday 1 February 2021 an official, Lubabalo Mbekeni, arrived on the Colenso farm and told Mr Cloete that he has to be gone in 24 hours, and that he has to take all his equipment and livestock with him. Mr Cloete protested this as he has nowhere to go but Mbekeni did not want to hear anything.

The next day Mbekeni sent a letter ordering Mr Cloete to be gone in 7 days and he also has to leave all the keys to all the buildings. Mbekeni signed the letter as the acting head of the Department of Rural Development in the WC.

A spokesperson for the Department of Rural Development in the WC, Vuyani Nkasayi, has confirmed to Rapport that Mr Cloete has been evicted. He said another tenant has been identified in terms of the government’s policy of preference to MK veterans (ANC armed wing of terrorists), people with disabilities and youth. The ANC always hides behind Socialist phrases like these to implement a blacks only policy by stealth. Nkasayi did not want to name the new tenant but Rapport has received information that the new tenant is a businessman from Atlantis. The DA will now take up the issue of Mr Cloete’s eviction in Parliament.

While the roots of the ANC were originally in African nationalism and traditionalism, this was hijacked when the communists hijacked the movement, and just like all communist scams the world over, they pretended to be a party for all South Africans, and naïve liberals like De Klerk and Max du Preex fell for that lie. It has become clear to almost all whites that the ANC has just continued the pre 1994 communist bush war, and has forced the “revolution” war into every single aspect of our daily lives, with laws to slowly but very surely take everything that whites and now coloureds have ever worked for, and put it in the pockets of the elites, and not the poor as they claim. Communism is Imperialism.

The ANC has always been known as virulently anti-white, but another truth is being revealed every day. They are anti-brown people as well, making them black supremacists. The joke however, is that the ANC and blacks do not realise that the Communist ideology they are so readily adopting, will soon be replacing them with Chinese people! It has already started… 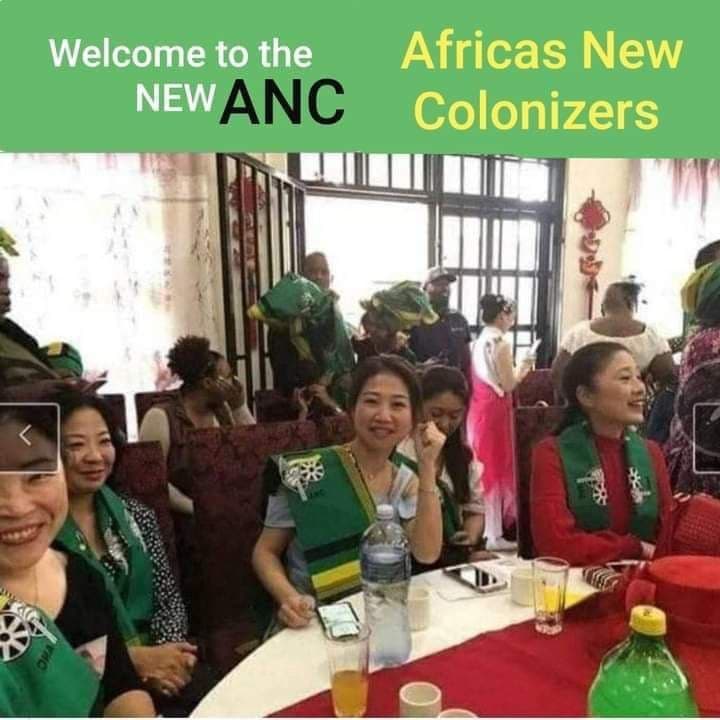 Using Socialism as a weapon and trojan horse, the ANC has instituted systemic and institutional racism against the white minority and that reality has never sunken in more since the pandemic broke out. If you want an example, take for instance the ANC closing small businesses – which the majority of white people rely on to earn an income – whilst refusing to give any financial assistance to any white business.

Another example is when the ANC announced the Tourism fund of over a R Billion to support businesses in that sector but that it is only intended for black owned businesses. The ANC also sees the Covid-19 vaccination drive as another moneymaking scheme and Ramaphosa has already said that only B.B.B.E.E businesses will participate in vaccine distribution. 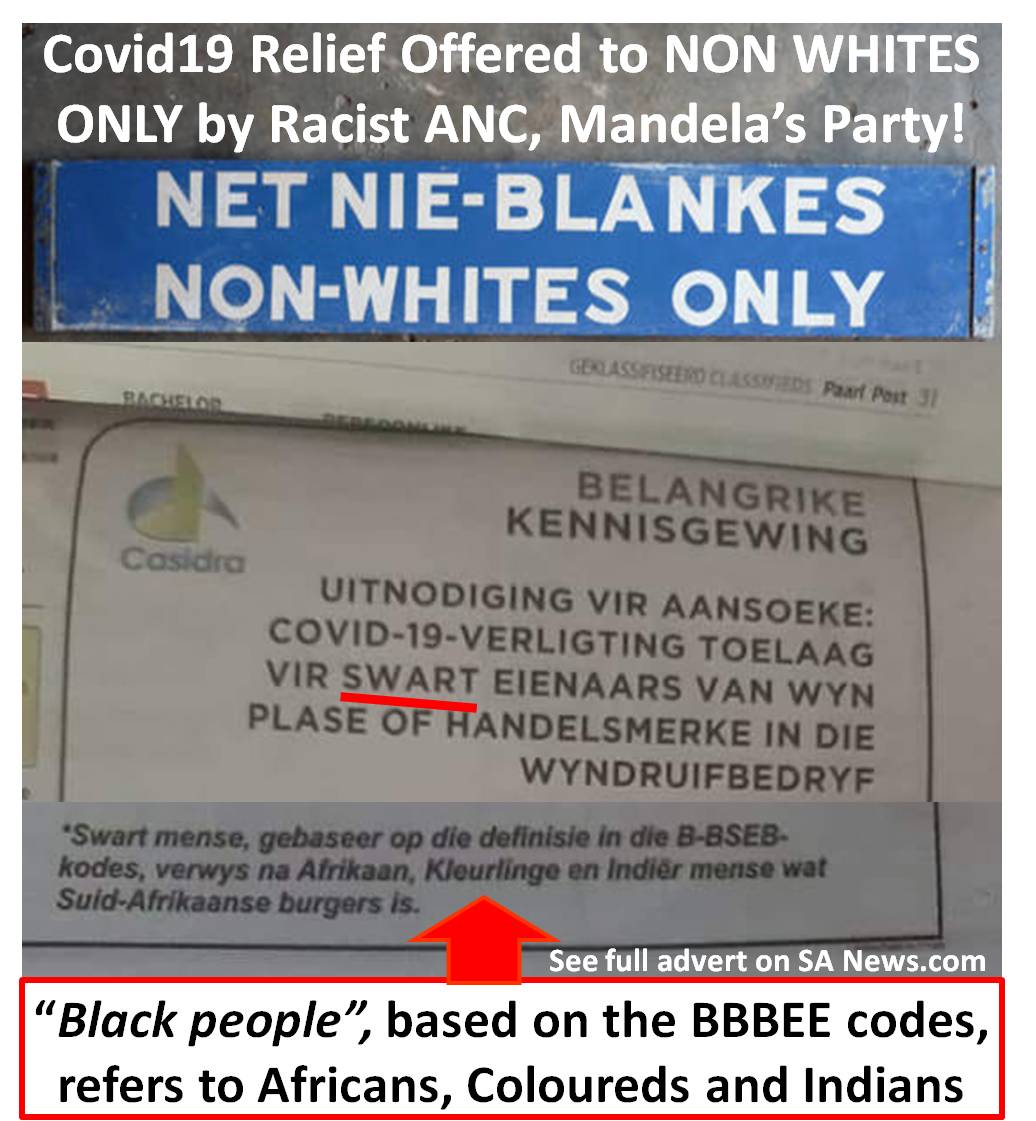