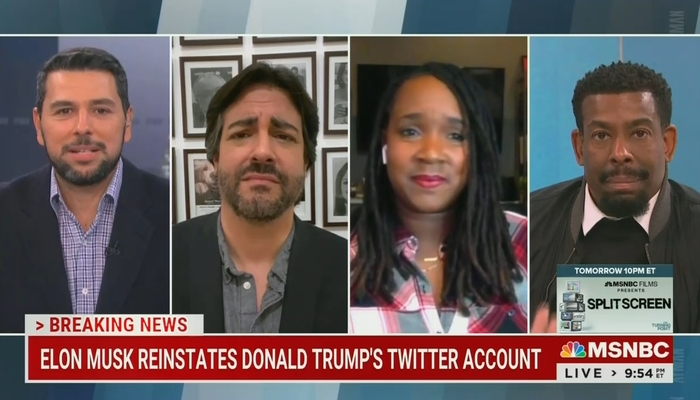 When the news broke late Saturday night that Twitter CEO Elon Musk announced that he reinstated former President Trump’s Twitter account, MSNBC predictably lashed out over the decision and played the race card, apparently unaware that Musk is South African.

On Saturday night, during MSNBC’s low-rated show Ayman, hosted by Ayman Mohyeldin, the show quickly turned sour when the Trump Twitter news broke. Turning to left-wing Daily Beast writer Danielle Moodie, Mohyeldin asked for her “thoughts on Trump reinstated back to Twitter with Elon Musk? Joking aside, how do you see this? You can joke if you want. I’m just saying I’m giving it to, you, however, you want to take it.”

Moodie was in a mood during her appearance and cried “I am absolutely disgusted. But what else do we expect from very white privileged cis hetero men protecting each other? Because we always mistake wealth and inheritance for genius.”…

Published in Big Tech, Culture, Political News and US News