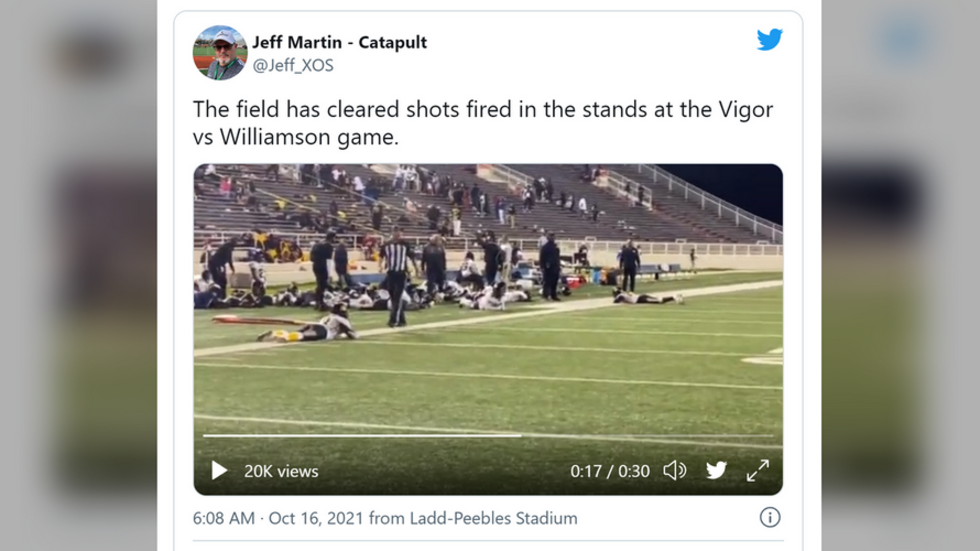 Several people were wounded after shots rang out during a high school football matchup in Mobile, Alabama, according to local police, who noted that one person was rushed to the hospital with “life-threatening” injuries.

Spectators and players were seen fleeing after the shooting at Ladd-Peebles Stadium in Mobile on Friday night, with the chaotic scene captured in videos making the rounds online. Details about the incident remain sparse, though police have confirmed several people had been taken in for treatment, including one victim with serious wounds.

WATCH: This is the moment on the MCPSS game broadcast between Williamson and Vigor when shots rang out in the concourse at Ladd-Peebles Stadium. The PA announcer is heard telling fans to "cover themselves" as people run onto the field and throughout the stadium. pic.twitter.com/SxS1hHEdOJ

The field has cleared shots fired in the stands at the Vigor vs Williamson game. pic.twitter.com/7TqsNjOk6P

The shooting erupted around 10pm local time during a bout between two high schools in the area, Williamson and Vigor, according to a Mobile ABC affiliate. Another regional outlet, WKRG, confirmed that at least four were shot.

While metal detectors were installed at the same stadium after another shooting during a high school game in 2019 that left nine people injured, it is unclear how the gun made it in on Friday. One witness, Miskia Barnes, raised that question to WKRG during a brief interview after the latest incident.

“It’s just a shame that you can’t come to a high school football game without this kind of nonsense. What I’m worried about and what I’m wondering – how they even got inside with guns. How did they get inside?” Barnes asked, adding “It’s horrible.”

Published in Crime, Gun Control, RIP and US News