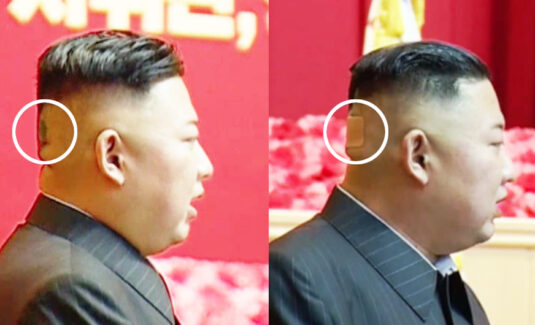 North Korean leader Kim Jong Un appeared with a dark spot on the back of his head during public activities last week — the latest health-related issue Kim has faced in recent years.

The cause or nature of the large, dark green spot or bruise on the rear right side of his head, which was covered with a bandage in some footage, is still unknown and is difficult to diagnose using only images.

It was visible during a military event Kim attended from July 24-27, as well as in footage of a war veterans conference and related events held from July 27-29.

There were no signs of the mark in a previous public appearance at a politburo meeting on June 29, and photos released of Kim at an appearance with musicians on July 11 did not show the back of his head.

Official video footage of Kim throughout last week’s events seemed to avoid broadcasting the head spot, but state media also released images from those events that clearly show a bandage there.

The latest health mystery follows a rare acknowledgement in state media of recent concerns over Kim Jong Un’s rapid weight loss in May, as a Pyongyang man claimed on state TV that the North Korean population was worried about his “emaciated” condition.

Kim’s head bandage is also far from the first sign of injury or health issues that carefully controlled state media outlets have revealed in recent years.

During his first appearance in May 2020 after a long absence that fueled speculation that he had had a heart attack or died, footage showed a new dark spot on Kim’s arm that some medical experts said could have been related to cardiac issues. The mark is still visible but has faded over time.

Another well-known instance of North Korea officially acknowledging Kim’s health issues came in 2014, when he was shown limping and using a walking stick after 40 days away from public activities — his longest such absence as North Korean leader. A state TV documentary later said he was “not feeling well” during his absence.

Meanwhile, it is likely that Kim was spending time at his Wonsan mansion during his two-week break from public activities in mid-July, just before showing up with the new mark and bandage on his head.

His recently upgraded “floating amusement park” boat appeared at the DPRK leader’s Wonsan private beach at the start of his break and was placed back in storage on the same day Kim reappeared in Pyongyang, according to Planet Labs satellite imagery.

Another leisure boat of his was taken out from the Wonsan mansion’s covered marina and placed at the private beach from July 28-30, coinciding with Kim’s last public appearance on July 29 and suggesting he may have returned or is planning a trip to the east coast.