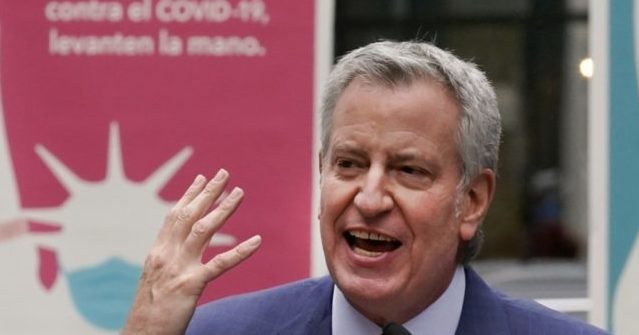 About 9 in 10 city workers covered by the mandate have gotten vaccinated and there have been no disruptions to city services as a result of staffing shortages, de Blasio told reporters at his daily news briefing. New York has more than 300,000 city employees. Firehouses remained open and sanitation workers made an extra pickup on Sunday to ensure trash wouldn’t pile up, the mayor said.

The development comes amid concerns from public safety union leaders that the mandate could lead to less law enforcement and firefighters on the streets of New York City. Last week, FDNY Firefighters Association President suggested the Big Apple’s mandate could slow the response time of firefighters and potentially cost lives.

“The department is scrambling to field at team. If they do follow through and send home 30 percent of New York City firefighters, it’s going to be extremely difficult to staff every company. I just feel it’s not physically possible,” Andrew Ansbro told the Fox News Channel last week.

“I looked over the statistics from last year and based on last year’s numbers, everyday in New York City there are 65 serious fires on average, there’s 1400 life threatening medical emergencies everyday on average and 80 heart attacks every single day in New York City on average,” he added. “If you increase response times in any of these responses, there are heart attack victims that are going to be out of the window of survivability if a normal response would have been eight to six minutes goes and becomes 15 to 20 minutes. You just can’t survive. If it’s a serious heart attack, you are not going to survive.”

Ansbro has warned that 40 percent of firehouses could have to shut down due to the mandate.

“The department must manage the unfortunate fact that a portion of our workforce has refused to comply with a vaccine mandate for all city employees,” Fire Commissioner Daniel Nigro stated.