Newsflash To Fem Men: Just Because You Put On A Dress, Heels, Makeup, And Stuff A Bra, Doesn’t Mean We Have To Call You Ma’am

The title is for men that slap on some makeup, put on a dress, stuff a bra and then go absolutely insane if someone dares call them “Sir,” instead of Ma’am.

There are also women that dress like men and want to be called Sir, but rarely do we see them lose their minds in spectacular fashion on camera, filming it themselves and thinking “yes, this doesn’t make me sound certifiably insane,” so we will focus on the men that want to be women and think they have the right to demand anything from someone else.

With that said…I have a problem when people decide it is alright to have a public temper tantrum, castigating anyone that won’t suck up to them and use the pronoun of their choice, as if creating a public disturbance is A-OK and verbally harassing establishment employees, just because they call themselves transgender.

I do care when someone screeches about being treated crazy, claiming they aren’t, while actively acting like a raving lunatic, in public.

Simply put, I am sick and tired of transgenders and LGBT proponents thinking they should have more rights than anyone else just because they decide they don’t like the body they were born with, or choose to live a different lifestyle than the majority.

We have seen multiple male transgender meltdowns over the years, and another one happened recently at a Popeye’s in Phoenix.

Language warning on the videos below.

Granted the young man admitted to sarcastically saying “bye Sir” the second time after he was publicly castigated for saying the first, despite his stating he didn’t use “Sir,” the first time, but seriously after the absolutely cow this crazy person threw, many may have done the same.

If it were a case of periodically seeing these kind of mentally questionable meltdowns, it would be waved away as “there is crazy in every group,” but with the suicide rates for transgenders, in conjunction with the increasing frequency of these public meltdowns, it is indicative of a serious mental issue that is being ignored by the media, LGBT community and liberals that all encourage and celebrate “gender identity” conflicts.

YES, IT IS A MENTAL ILLNESS

While a few transgender male to females will admit outright that it is a form of mental illness, they are usually shunned by the LGBT community for speaking the truth, highlighting the suicide rates, and are clearly not representative of the movements as a whole.Dare highlight the actual data and you are labeled “transphobic.”So, at the risk of being labeled transphobic, lets take a look at the relevant numbers.From a 2018 report:

The picture becomes even more alarming when researchers analyze data by subgroups of gender identity. In a 2018 study of youth ages 11-19, 51% of transgender males said they’d attempted suicide. For transgender females, the figure was 30% percent.

The fact is LGBT people are at a much higher risk for suicide and suicide attempts.The preferred narrative is that “Anti-LGBT discrimination and victimization contribute to an increase in the risk of suicidality and that LGBT people are at disproportionate risk of suicidal ideation, planning and attempts.”That is a blatant lie, otherwise the data would show a much higher rate of suicide among the general population, because human beings have always picked on, bullied, and mocked others that are different from them.Sad, but true.For that type of behavior to affect someone so badly they try or do commit suicide, there is an underlying mental issue to begin with. 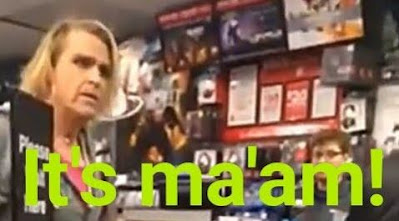 The brings us back full circle to the original video above, where the foul-mouthed guy pretending to be a girl, losing his mind over nothing more than someone that may, or may not have originally called him “sir.”

Normal people, sane people, non-crazy people, do not have public meltdowns over someone who is trying to be polite by using the term sir or ma’am.That is as insane as people going nuclear because someone else dared say “God bless you” when they sneezed.

Newsflash to men: Just because you put on a dress, heels, makeup and stuff a bra, doesn’t mean I, or anyone else, has to call you ma’am.

For the record, let me state… I don’t care.I don’t care what a person who is obviously a man wants to be called.

Live and let live and God will be the ultimate judge in the end.

The LGBT community, along with liberals and the media that encourage and, in fact, attempt to indoctrinate the public into thinking this behavior is “normal,” are partially responsible for every single one of those suicides referenced above.

Watch below and ask yourself…. are any of these people acting sane? No, I don’t mean how they are dressed, I mean how they are acting out like spoiled children throwing temper tantrums when they don’t get what they want.

This is not sane, adult behavior.

This last video is the ….person…. from the first video at the top of this article, explaining why the public meltdown was justified in his opinion.Tell us if you think this rant sounds sane in any way.

Published in Health News, Opinion and US News