NUCLEAR WEAPONS IN THE END TIMES 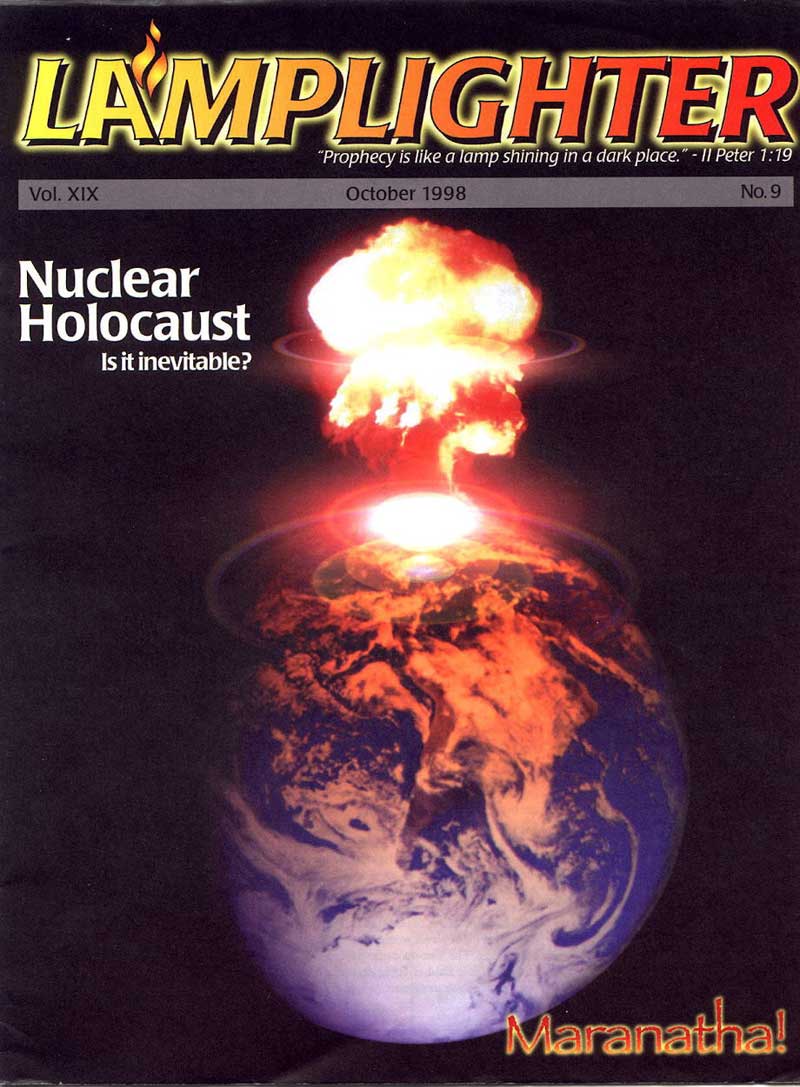 Nuclear Weapons in the End Times

Does the Bible predict a nuclear holocaust?

Does the Bible predict a nuclear holocaust?

“And I looked, and behold, a pale horse. And the name of him who sat on it was Death, and Hades followed with him…” (Revelation 6:8)

On August 6, 1945, when the Enola Gay’s bombardier Tom Ferebee sighted Hiroshima’s Aioi Bridge, he knew the moment had arrived. Squeezing the trigger on his Norden bombsight, he became the first man in history to drop a nuclear weapon upon a populated city. Tail gunner Bob Caron, after being temporarily blinded, described what he saw on the ground below: “It’s like bubbling molasses down there… the mushroom is spreading out… fires are springing up everywhere… it’s like a peep into hell.”

The people of Hiroshima within half a mile of the explosion were seared to bundles of smoking char in a fraction of a second. Thousands of these small black bundles could be seen stuck to streets, bridges, and sidewalks. Birds ignited in midair, and 70,000 buildings were obliterated. Mankind had entered the atomic age, the end of which was too terrifying to contemplate.

The Nature of Armageddon

Since the beginning of the atomic age, nuclear weapons and the term “Armageddon” have been frequently linked together. Billy Graham rose to prominence in the 1950’s proclaiming that the nuclear “sword of Damocles” was hanging over all the nations, and that only Christ was a sure foundation in such perilous days. Hal Lindsey”s mega best seller, The Late Great Planet Earth (1970), made a strong case for a nuclear holocaust scenario in the days of tribulation predicted in the book of Revelation.

Even secular sources took up the theme. The June 12, 1981 Toronto Globe and Mail noted that the decision to go ahead with the neutron bomb was the biggest step taken toward Armageddon since 1961. In San Francisco today you can call a number and get a recorded message by the Doom Society for Secular Armageddonism, who, in melodramatic tones, tell you that we are living in the end times and that the coming end of the world is a fait accompli. They are quick to deny that God might have anything to do with this, however, and insist that the coming end of the world will be strictly do-it-yourself, as a result of such things as nuclear proliferation, racism, ultra nationalism, and (you might have guessed) religious fundamentalism.

Many Americans associate nuclear weapons with Armageddon, because, of all man’s discoveries and inventions, they alone contain the capacity to wipe out all human life on the earth within a few short hours. Let us consider the awesome power in the first primitive atomic bombs.

The bomb dropped on Hiroshima, called “Little Boy,” was flown there in a B-29 bomber and aimed with a bombsight. It weighed nearly ten thousand pounds and had the explosive power of 12,500 tons of TNT. At ground zero, the point immediately beneath the weapon, the temperature reached above 3,000 degrees centigrade. Within seconds, what had been a thriving city became a wasteland. No part of the city was left untouched. Eighty thousand people died instantly, many burning into black bundles while in mid step. A six hour firestorm began. An eyewitness — a college professor — described it thus:

“I climbed Hikiyama Hill and looked down. I saw that Hiroshima had disappeared… I was shocked by the sight… I saw many dreadful scenes after that — but that experience, looking down and finding nothing left of Hiroshima was so shocking that I simply can’t express what I felt… Hiroshima didn’t exist — that was mainly what I saw — Hiroshima just didn’t exist.”