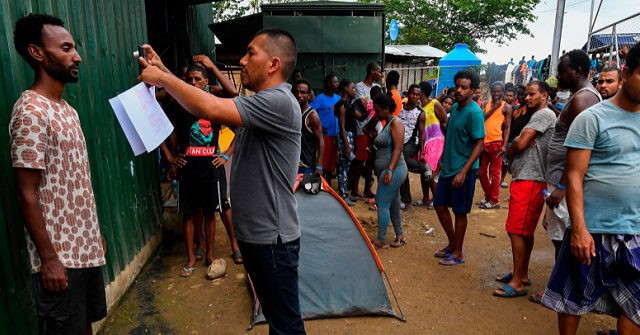 Colombia and Panama agreed to limit the flow of U.S.-bound migrants from various continents transiting…

Panamanian and Colombian officials this week agreed to impose a daily limit of 650 this month and 500 in September on U.S.-bound global migrants granted safe passage to cross the deadly and treacherous Darien Gap jungle that straddles their mutual border rather than trying to stop them.

Without raising any objections, a U.S. State Department official quietly participated in the online event at which U.S. allies Colombia and Panama agreed to allow hundreds of global migrants to travel to reach America’s southern border, which is already facing a record-setting surge of migrants.

“By consensus, the humanitarian approach will guide the actions that we agree on for the orderly and controlled passage of migrants on their way north,” Panama’s Minister of Foreign Affairs, Erika Moynes, declared during the teleconference.

On Thursday, the Associated Press (AP) revealed that Panama and Colombia reached the pact to limit the number of migrants allowed to cross their mutual border undeterred during a teleconference, witnessed by officials from Mexico, the United States, Brazil, Chile, Costa Rica, and Peru. The Biden administration has remained silent about its participation in the event.

“So far this year, Panama estimates more than 50,000 migrants have come through the dangerous Darien route, about double the number in 2018. Officials say about 16% of them are children or youths,” AP added.

Panama, Colombia agree to limit of 700 migrants per day (from @AP) By ⁦@Juan_Zamorano⁩ https://t.co/Y0kfd7ZGQS

At the end of July, the Washington Post quoted Jorge Tobon, the mayor of a coastal Colombian town near the Darien jungle, saying that 1,000 global migrants were arriving daily at his jurisdiction alone.

The Biden administration did not issue any statements in anticipation of the Panama-hosted event or after announcing the participation of Uzra Zeya, the undersecretary for civilian security, democracy, and human rights at the U.S. State Department.

President Joe Biden has mostly ignored the growing number of extra-continentals reaching the U.S., who are beginning to contribute to the record-setting Customs and Border Protection (CBP) encounters along the southern border.

“Extra-continentals” is government jargon for individuals from countries and regions far away from the U.S. land borders, including the Caribbean, South America, and terror-linked countries and other nations in Asia, Africa, and the Middle East.

Asked about the Biden administration’s response to the migration crisis unfolding at the Darien jungle Thursday, Ned Price, a spokesperson for the State Department, did not bring up his colleague’s participation in Wednesday’s event or the agreement itself.

Price blamed the pandemic for America’s limited involvement in tackling the flow of U.S.-bound global migrants through Panama.

“At the same time, we are still very much in the midst of a pandemic, and there are certain limits on what we’re able to do at the moment,” Price proclaimed. 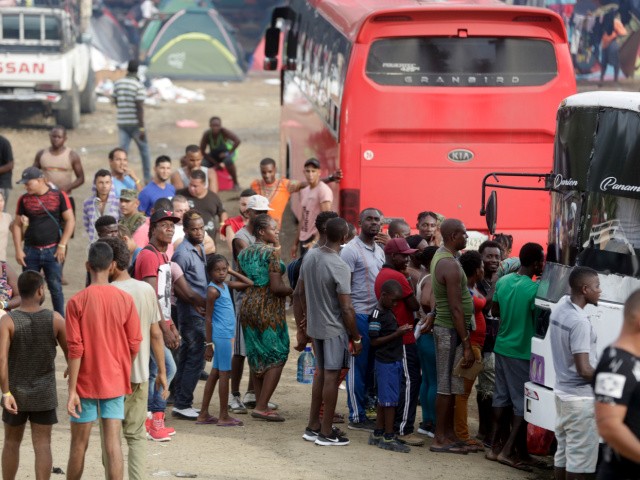 In this May 10, 2019 photo, a group of migrants wait for space in a bus that will take them on their trip north, in Peñitas, Darien Province, Panama. Panamanian authorities are struggling to contend with a spike in the number of migrants passing through what’s known as the Darien Gap, a roadless, lawless region of tropical isthmus that’s one of the most dangerous stretches for people heading north from South America, usually toward the United States or Canada. (AP Photo/Arnulfo Franco)

For a few months now, Panama has been pleading for help from the U.S., stressing that they are having difficulty coping with an unprecedented surge of U.S.-bound extra-continentals crossing illegally from Colombia.

Biden has placed migration from Central America’s Northern Triangle (NT) countries of Guatemala, El Salvador, and Honduras at the center of his efforts to solve the U.S. southern border crisis, paying little attention to other countries.

In May, the New York Times reported the Biden team is releasing most extra-continentals who arrive at the border into U.S. communities.

While Biden served as vice president, the U.S. publicly reached out to Latin American countries to establish closer cooperation to combat a previous surge in extra-continentals reaching the U.S. southern border after crossing the Darien jungle.

The “controlled flow” system stems from a 2016 agreement between Panama and Costa Rica to jointly deal with transit migration in an orderly manner by ensuring the care and safe passage of U.S.-bound extra-continentals vetted for terrorism ties and most recently vaccinated against the Chinese coronavirus.

Panamanian authorities have recently intercepted terrorists trying to blend in with migrant flows. Some analysts assert the U.S. is at least partly still monitoring “controlled flow.”

U.S. officials allege that “controlled flow” benefits both the United States and Panama by warning America about migrants heading towards its border without obliging Panama to either receive or deport the migrants, which Latin American officials say is a costly endeavor.

Eric Martin, a Latin American economics reporter for Bloomberg, cited a report from one of his colleagues showing a nearly 20-fold increase in global migrants passing through Panama since the beginning of the year had alarmed officials in the country, “overwhelming towns along the route and threatening to aggravate the crisis at the U.S. southern border.”

“More than 19,000 migrants walked to Panama from Colombia last month, compared to 1,007 in January,” Martin tweeted Tuesday. “They came from more than 30 different countries, from Bangladesh to Sierra Leone, but Haitians and Cubans were the most numerous.”

"More than 19,000 migrants walked to Panama from Colombia last month, compared to 1,007 in January. They came from more than 30 different countries, from Bangladesh to Sierra Leone, but Haitians and Cubans were the most numerous."@mjbristow

The migrant surge in Panama could also end up further exacerbating the U.S. southern border crisis, already fueled by a surge of migrants encountered monthly by CBP agents, a figure that, since April, has incrementally reached highs not seen in two decades.

Published in Biden and World News