New laboratory tests commissioned by EWG have for the first time found the toxic fluorinated chemicals known as PFAS in the drinking water of dozens of U.S. cities, including major metropolitan areas. The results confirm that the number of Americans exposed to PFAS from contaminated tap water has been dramatically underestimated by previous studies, both from the Environmental Protection Agency and EWG’s own research.

Based on our tests and new academic research that found PFAS widespread in rainwater, EWG scientists now believe PFAS is likely detectable in all major water supplies in the U.S., almost certainly in all that use surface water. EWG’s tests also found chemicals from the PFAS family that are not commonly tested for in drinking water.

Of tap water samples from 44 places in 31 states and the District of Columbia, only one location had no detectable PFAS, and only two other locations had PFAS below the level that independent studies show pose risks to human health. Some of the highest PFAS levels detected were in samples from major metropolitan areas, including Miami, Philadelphia, New Orleans and the northern New Jersey suburbs of New York City.

In 34 places where EWG’s tests found PFAS, contamination has not been publicly reported by the Environmental Protection Agency or state environmental agencies. Because PFAS are not regulated, utilities that have chosen to test independently are not required to make their results public or report them to state drinking water agencies or the EPA. 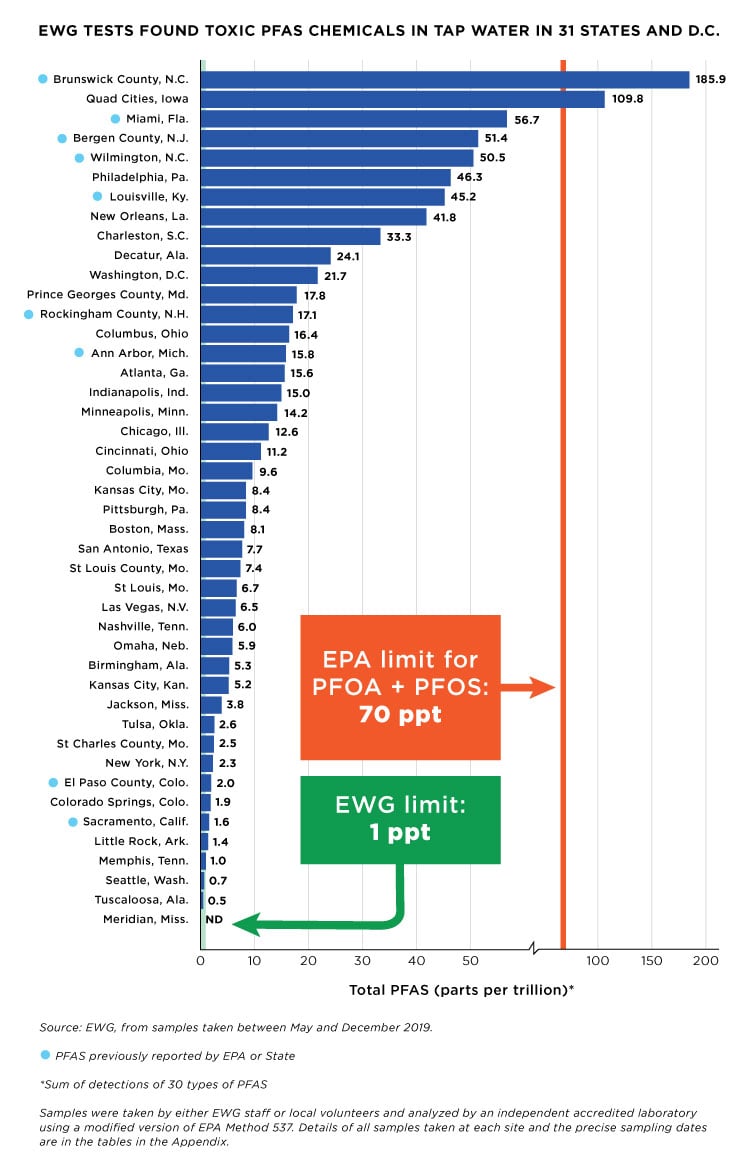 EWG’s samples – collected by staff or volunteers between May and December 2019 – were analyzed by an accredited independent laboratory for 30 different PFAS chemicals, a tiny fraction of the thousands of compounds in the family of per- and polyfluoroalkyl substances. An EPA-mandated sampling program that ended in 2015 tested for only a few types of PFAS and required utilities to report only detections of a higher minimal level. The EPA also only mandated testing for systems serving more than 10,000 people, whereas EWG’s project included a sample from a smaller system excluded from the EPA program. Because of those limitations, the EPA reported finding PFAS at only seven of the locations where EWG’s tests found contamination.

In the 43 samples where PFAS was detected, the total level varied from less than 1 part per trillion, or ppt, in Seattle and Tuscaloosa, Ala., to almost 186 ppt in Brunswick County, N.C. The only sample without detectable PFAS was from Meridian, Miss., which draws its drinking water from wells more than 700 feet deep.

The samples with detectable levels of PFAS contained, on average, six or seven different compounds. One sample had 13 different PFAS at varying concentrations. The list of the 30 PFAS compounds we tested for, and the frequency with which they were detected, is detailed in the appendix.

PFAS are known as “forever chemicals” because once released into the environment they do not break down, and they build up in our blood and organs. Exposure to PFAS increases the risk of cancer, harms the development of the fetus and reduces the effectiveness of vaccines. Biomonitoring studies by the federal Centers for Disease Control and Prevention show that the blood of nearly all Americans is contaminated with PFAS.

The most notorious PFAS compounds are PFOA, formerly used by DuPont to make Teflon, and PFOS, formerly an ingredient in 3M’s Scotchgard. Those compounds have been phased out under pressure from the EPA, but they persist in drinking water, people and the environment. In EWG’s tests, PFOA was detected in 30 of 44 samples, and PFOS in 34 samples. The two compounds represented approximately a quarter of the total PFAS level in each sample.