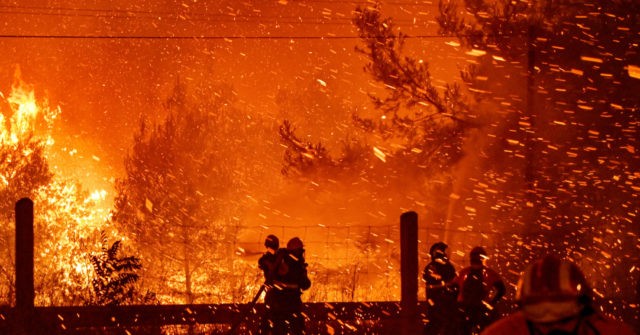 In apocalyptic scenes, small ferries and other boats evacuated 1,400 people from a seaside village…

by BREITBART LONDON and JACK MONTGOMERY

THRAKOMAKEDONES, Greece (AP) – Wildfires rampaged through Greek forests for yet another day Saturday, threatening homes and triggering more evacuations a day after hundreds of people were plucked off beaches by ferries in a dramatic overnight rescue.

One volunteer firefighter has died and at least 20 people have been treated in hospitals. Dozens of fires were burning across the country Saturday, blazes that one official described as “a biblical catastrophe.”

Scores of homes, businesses and farms have been burnt over the last week in fires that broke out during Greece’s most protracted and intense heatwave in three decades.

People board a ferry prior to an evacuation as a wildfire approaches the seaside village of Limni, on the island of Evia, Greece, on August 6, 2021. (Photo by Sotiris DIMITROPOULOS / Eurokinissi / AFP) (Photo by SOTIRIS DIMITROPOULOS/Eurokinissi/AFP via Getty Images)

One massive fire advanced up the slopes of Mount Parnitha, a national park north of Athens that features some of the last substantial forests near the Greek capital. The blaze sent choking smoke across Athens, where authorities set up a hotline for residents with breathing problems. Overnight and throughout the day, fire crews struggled to contain constant flare-ups.

In apocalyptic scenes that went into the night, small ferries and other boats evacuated 1,400 people from a seaside village and beaches on Evia, an island of rugged, forested mountains popular with tourists and campers, after approaching flames cut off other means of escape. Behind them, towering flames and smoke blanketed the hills.

The scale of Greece’s wildfires has been breathtaking, with more than 100 breaking out across the country over the past few days. Most were quickly tamed, but several rapidly burned out of control, consuming homes and causing untold ecological damage. 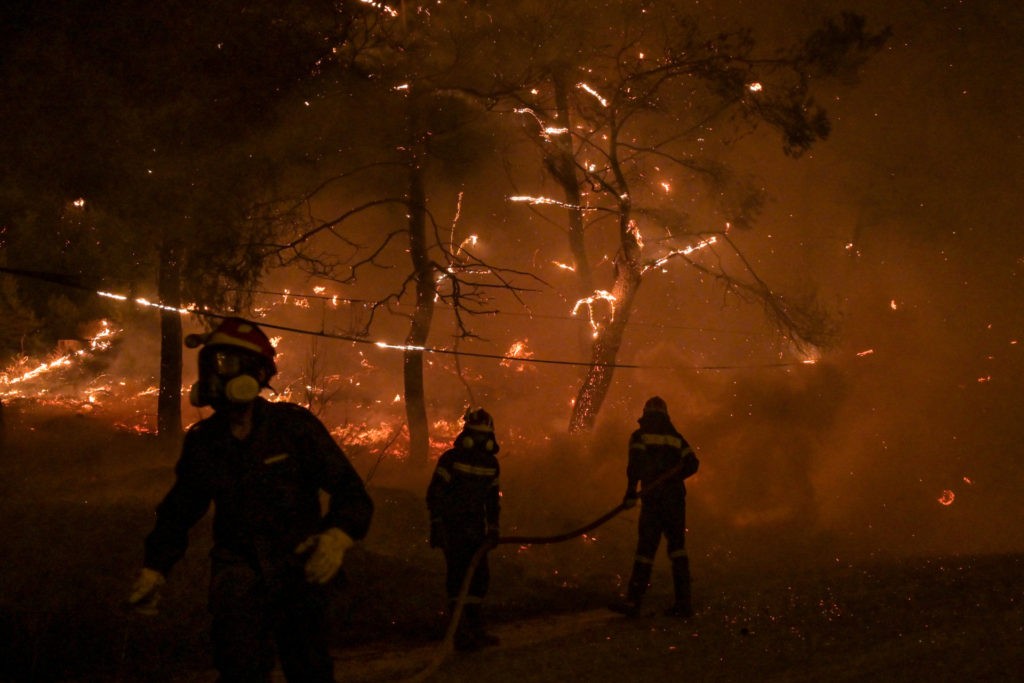 ATHENS, GREECE – AUGUST 5: Firefighters try to put out a fire as flames spread over a highway during a wildfire on August 5 2021 in northern Athens, Greece. People were evacuated from their homes after a wildfire reached residential areas of northern Athens as record temperatures reached 42 degrees Celsius (107.6 Fahrenheit). (Photo by Milos Bicanski/Getty Images)

A local official in the Mani region of the Peloponnese estimated the wildfire there had destroyed around 70 per cent of her area. 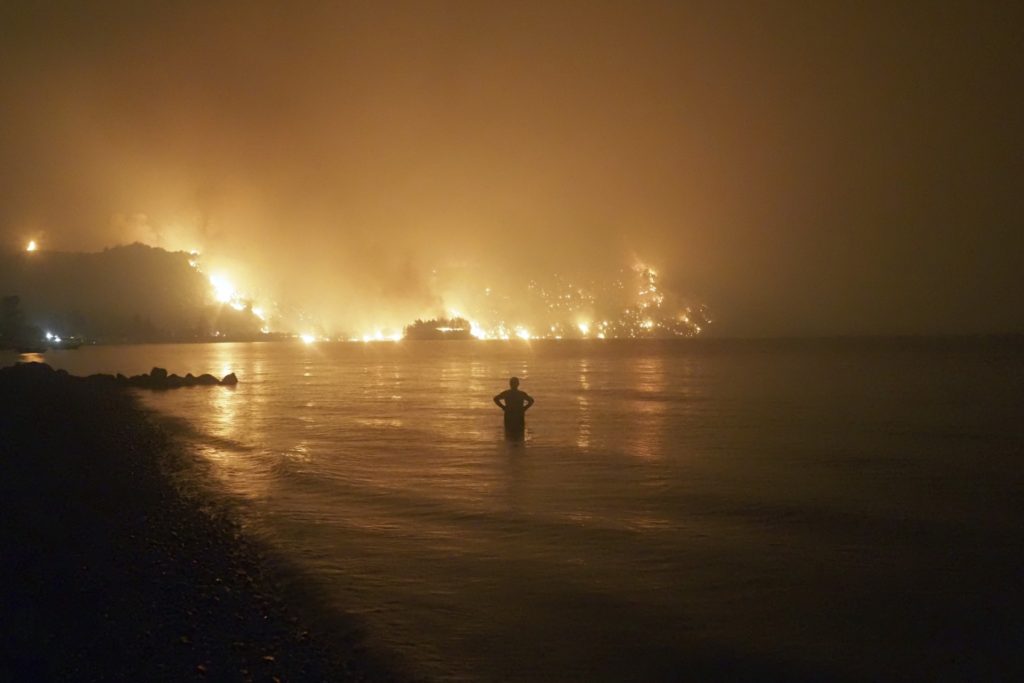 A man watches the flames as wildfire approaches Kochyli beach near Limni village on the island of Evia, about 160 kilometres (100 miles) north of Athens, Greece, late Friday, Aug. 6, 2021. Wildfires raged uncontrolled through Greece and Turkey for yet another day Friday, forcing thousands to flee by land and sea, and killing a volunteer firefighter on the fringes of Athens in a huge forest blaze that threatened the Greek capital’s most important national park. (AP Photo/Thodoris Nikolaou)

Other local officials and residents in southern Greece, near Athens and on Evia, phoned in to television programs, appealing live on air for more firefighting help.

“We’re continuing to fight a very big battle. All night our forces worked hard,” Hardalias said, adding that he expected the fire north of Athens to be contained, barring any unexpected developments, within the day. 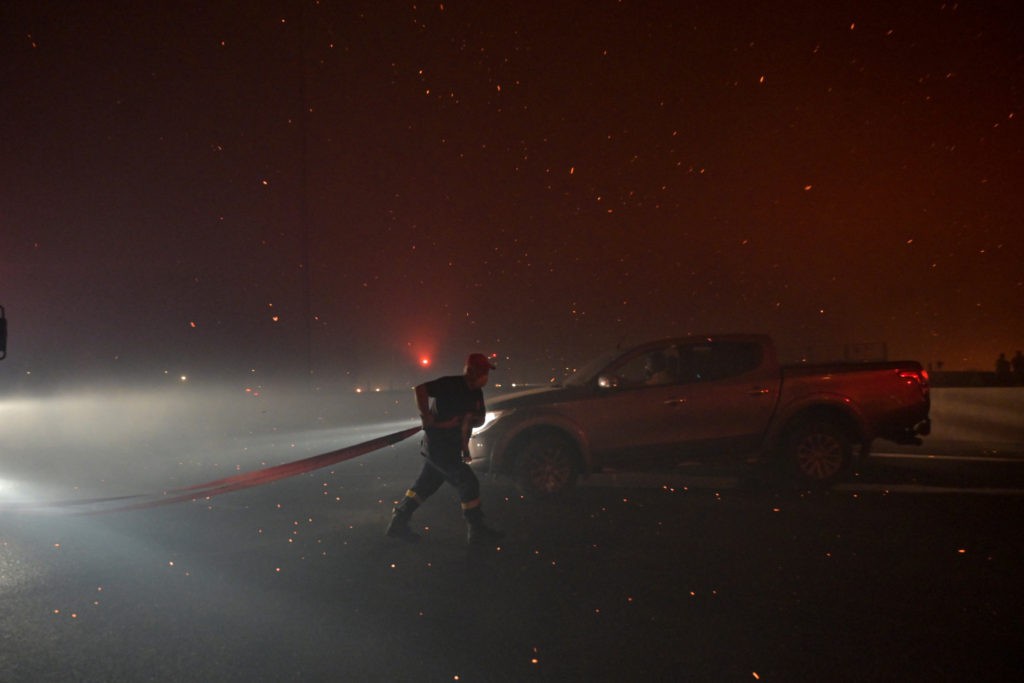 ATHENS, GREECE – AUGUST 5: Firefighters try to put out a fire as flames spread over a highway during a wildfire on August 5 2021 in northern Athens , Greece. People were evacuated from their homes after a wildfire reached residential areas of northern Athens as record temperatures reached 42 degrees Celsius (107.6 Fahrenheit). (Photo by Milos Bicanski/Getty Images)

In Evia, where 39 villages had been evacuated, six aircraft, four helicopters, 475 firefighters and 35 ground teams were operating, including Romanian and Ukrainian firefighters. The army sent 84 special forces personnel, while the navy was providing a torpedo boat, two landing craft and 15 smaller boats to assist in sea evacuations if necessary, Hardalias said. 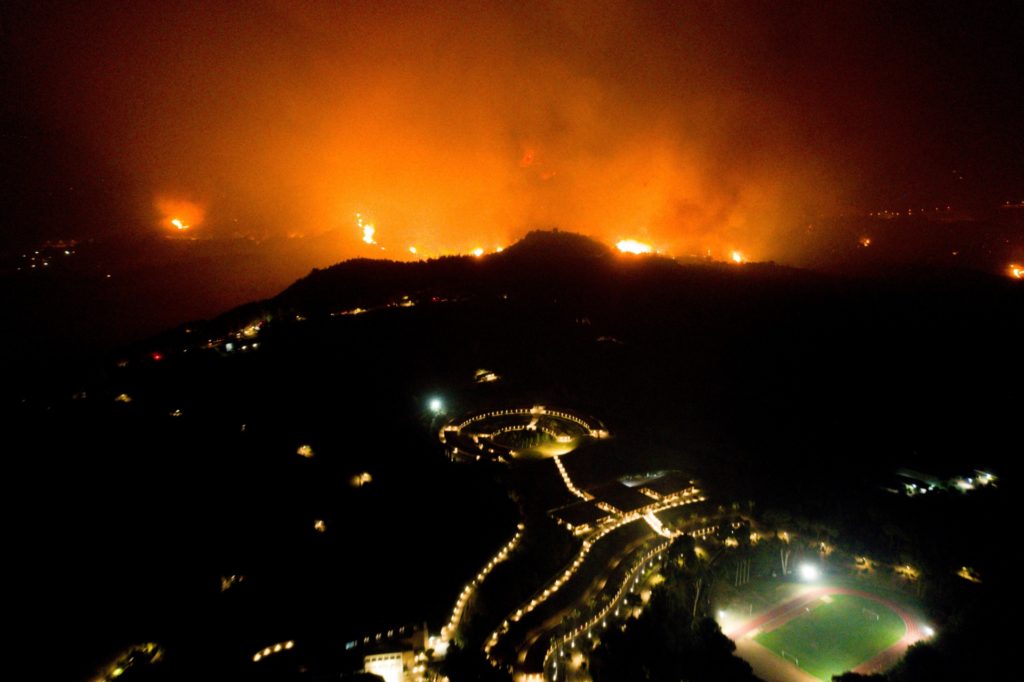 A wildfire approaches the Olympic Academy in ancient Olympia in western Greece on August 4, 2021. – Greek firefighters have been battling several heatwave-fuelled forest infernos, including around Athens that have destroyed or damaged dozens of homes and businesses and forced the evacuation of villages, and others in the south and on the island of Euboea. (Photo by -/Eurokinissi/AFP via Getty Images)

Fires described as the worst in decades have also swept through stretches of neighbouring Turkey’s southern coast for the past 10 days, killing eight people. The top Turkish forestry official said 217 fires had been brought under control since July 28 in over half of the country’s provinces, but firefighters still worked Saturday to tame six fires in two Turkish provinces. 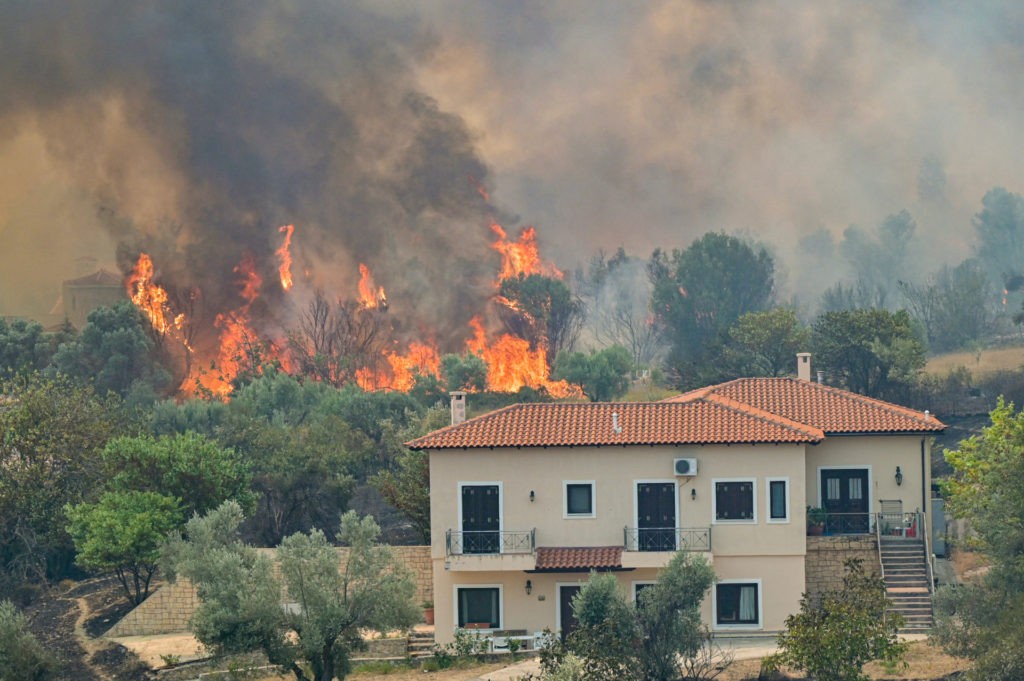 ATHENS, GREECE – AUGUST 6: Houses on fire in the Afidnes area, northern Athens on August 6 2021 in Athens, Greece. People were evacuated from their homes after a wildfire reached residential areas of northern Athens as record temperatures were recorded at 42 degrees Celsius (107.6 Fahrenheit). (Photo by Milos Bicanski/Getty Images)

Greek Prime Minister Kyriakos Mitsotakis visited the fire department’s headquarters in Athens Saturday and expressed his “deep sadness for what has happened.”

Securing aid for everyone affected by the wildfires would be “my first political priority,” he said, promising that all burnt areas would be declared reforestation zones.

“When this nightmarish summer has passed, we will turn all our attention to repairing the damage as fast as possible, and in restoring our natural environment again,” Mitsotakis said. 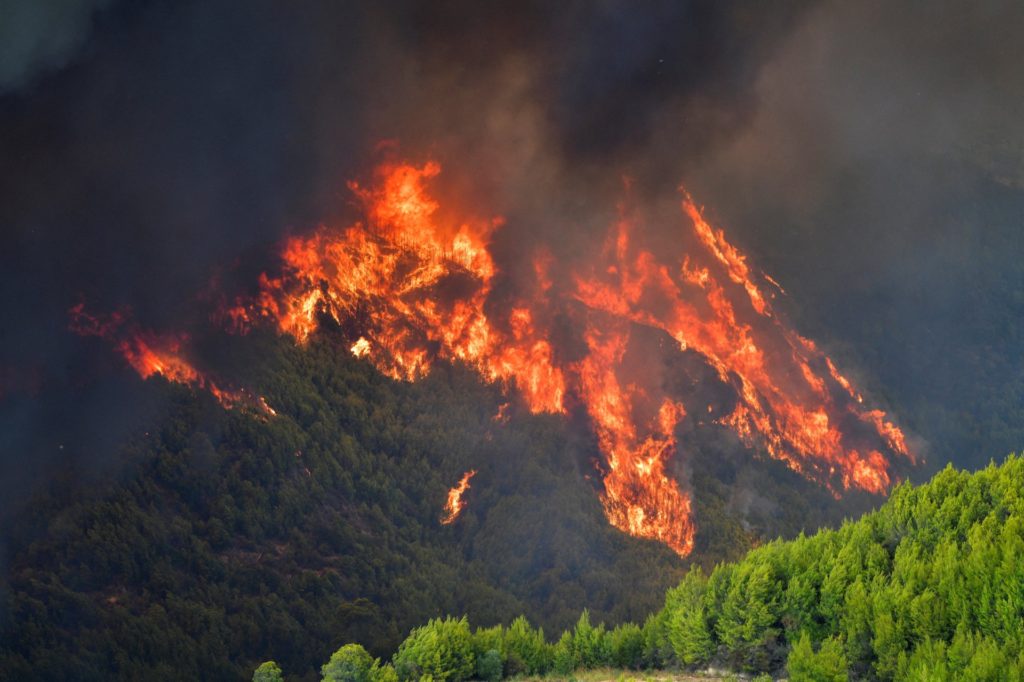 Flames engulf the forest at a mountain near Platanos village, near ancient Olympia in western Greece on August 4, 2021. Greek firefighters have been battling several heatwave-fuelled forest infernos, including around Athens that have destroyed or damaged dozens of homes and businesses and forced the evacuation of villages, and others in the south and on the island of Euboea. (Photo by STR/Eurokinissi/AFP via Getty Images)

Greece has been baked by its most protracted heatwave in 30 years, with temperatures soaring to 45 degrees Celsius (113 degrees Fahrenheit). Temperatures eased Friday but the winds picked up, further exacerbating the situation.

Evacuation orders for villages and neighbourhoods have been constant, sent by push alerts to mobile phones in affected areas, while some police and firefighters have gone door-to-door urging people to leave. 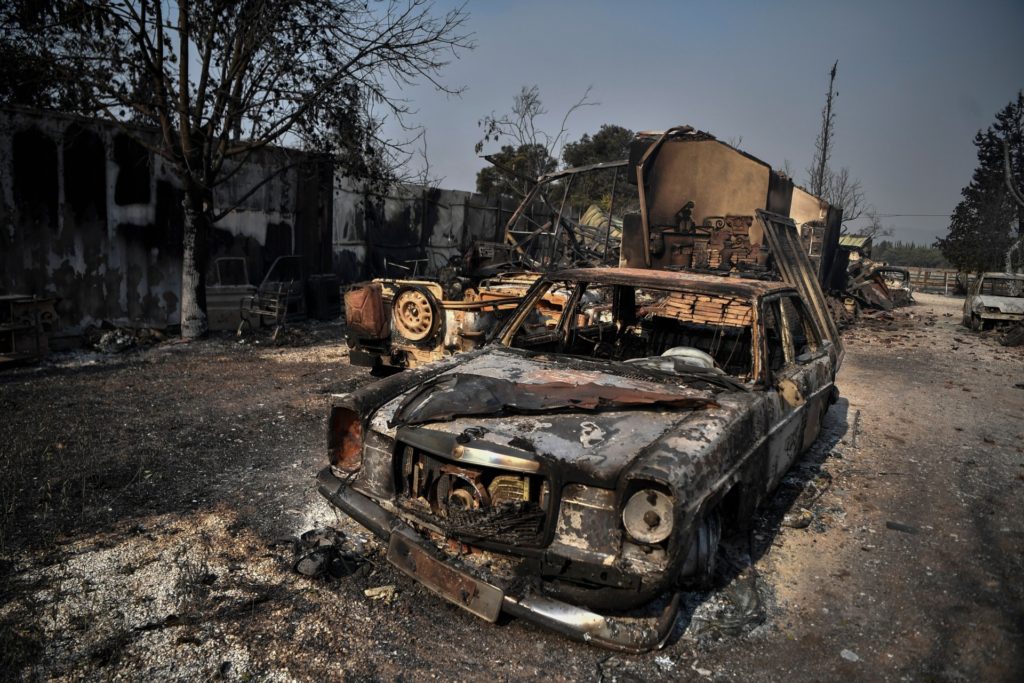 This photograph taken on August 4, 2021 shows burned cars and buildings in Tatoi-Acharnes, north of Athens, as fires broke out at the foot of Mount Parnes, 30 kilometres north of Athens. (Photo by LOUISA GOULIAMAKI/AFP via Getty Images)

The causes of the fires are under investigation. Hardalias said three people were arrested Friday — in the greater Athens area, central and southern Greece — on suspicion of starting blazes, in two cases intentionally. Police said the suspect detained north of Athens had allegedly lit fires at three separate spots in the area ravaged by the large blaze, which first broke out Tuesday.

Greek and European officials also have blamed climate change for the large number of fires burning through southern Europe, from southern Italy to the Balkans, Greece and Turkey.

In Turkey’s seaside province of Mugla, a popular region for tourists, some fires appeared to be under control Saturday and cooling efforts were ongoing. The forestry minister said blazes continued in the Milas area. Environmental groups urged authorities to protect the forests of Sandras Mountain from nearby fires.

Municipal officials in Antalya, on Turkey’s Mediterranean coast, said a wildfire was still burning around the Eynif plain, where wild horses live.

Massive fires also have been burning across Siberia in northern Russia for weeks, forcing the evacuation Saturday of a dozen villages. In all, wildfires have burned nearly 15 million acres this year in Russia. 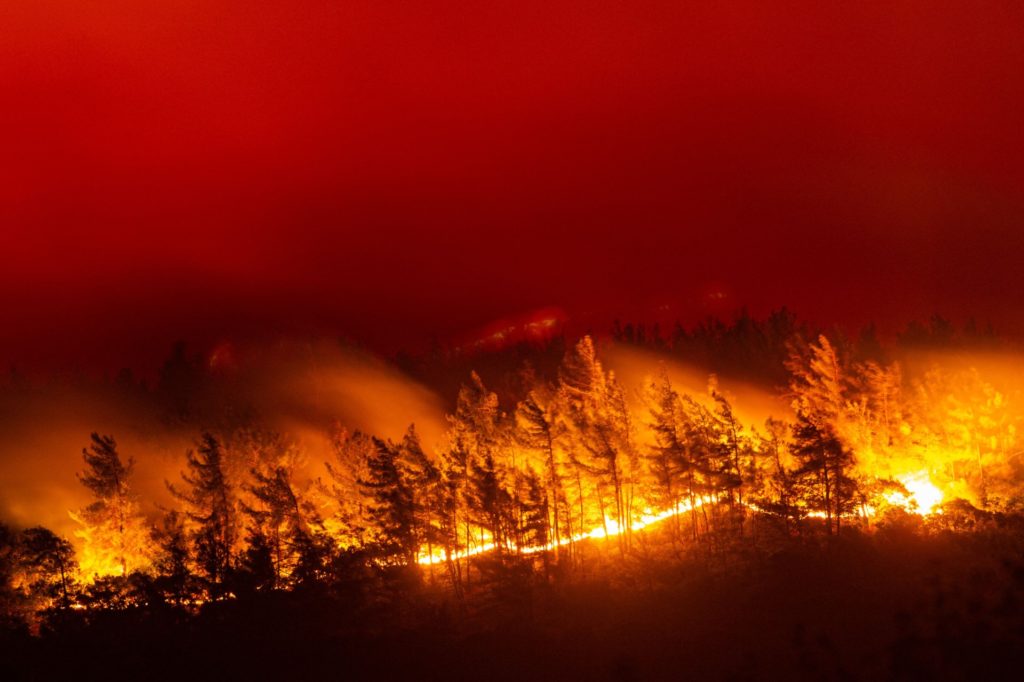 This picture shows flames rising from a forest burning in Akcayaka village in Milas area of the Mugla province, on August 6, 2021. – In Turkey, at least eight people have been killed and dozens more hospitalised as the country struggles against its deadliest wildfires in decades. (Photo by Yasin AKGUL / AFP) (Photo by YASIN AKGUL/AFP via Getty Images)