Poll: 51% Of Americans Now Say Trump Was A Better President Than Biden Poll: 51% Of Americans Now Say Trump Was A Better President Than Biden

The honeymoon is over

The honeymoon is over.

President Biden and former President Trump are statistically tied when it comes to their favorability among U.S. voters, according to a new Harvard CAPS/Harris Poll survey shared exclusively with The Hill on Monday.

The findings are a remarkable shift for Biden, who repeatedly outperformed Trump’s favorability numbers throughout the early months of his presidency.

But multiple crises, including a surge in new COVID-19 infections in recent months and the chaotic withdrawal of U.S. troops from Afghanistan, have bruised public perceptions of Biden.

[…] The latest Harvard CAPS-Harris Poll survey also shows Biden’s overall approval rating under water for the first time since he took office. Forty-eight percent of those surveyed say they approve of the job he’s doing in the White House, while 50 percent disapprove.

That follows on the heels of a July Harvard CAPS/Harris Poll survey that showed his approval rating sinking to 52 percent from 62 percent in June.

With surging inflation, open borders and vaccine mandates combined with vaccine failure in the face of rapidly evolving variants, the collapse of his approval rating has only just begun. 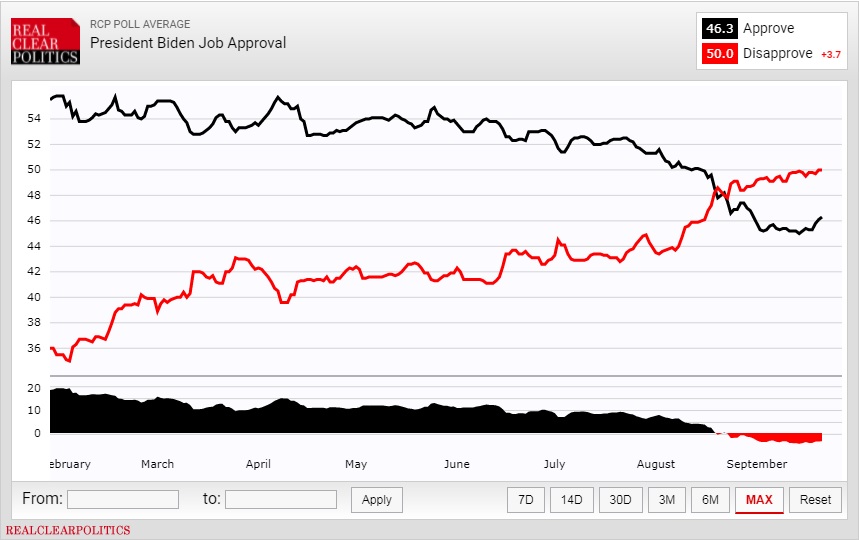 Published in Opinion, Political News, Statistics, Trump and US News