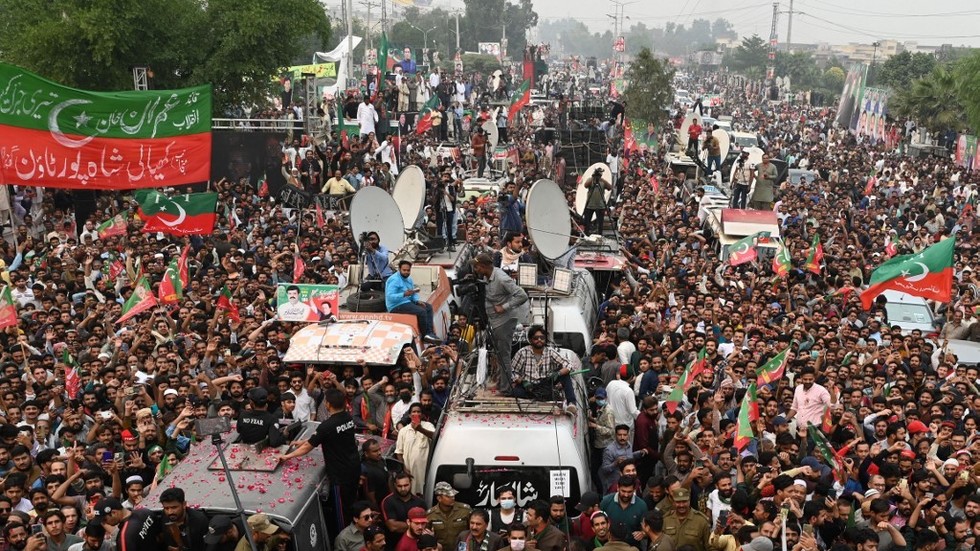 Supporters of Imran Khan brought traffic to a standstill outside Islamabad, days after the ex-PM was shot

Supporters of former Pakistani prime minister Imran Khan blocked roads near Islamabad on Tuesday, disrupting traffic and forcing schools to close. Police documents are thought to have recorded that a lone gunman attempted to kill Khan last week, while Khan claims there was a conspiracy involving two would-be assassins.

Video footage filmed on Monday and Tuesday showed supporters of Khan’s Pakistan Tehreek-e-Insaf party bringing chairs onto highways outside the Pakistani capital, as other groups of demonstrators staged similar sit-down protests inside the city.

Pakistanis can't use the motorway from Lahore to Islamabad BECAUSE IMRAN KHAN SAID SO. pic.twitter.com/t2iZCzcGdC

Banners featuring Khan’s likeness were held aloft by his supporters and hung from bridges. The protests forced a number of schools to close, Reuters reported on Tuesday.

Khan was shot and wounded during a rally outside the town of Gujranwala last Thursday. He had been calling on his supporters to take to the streets since he was ousted from power in April, and at the time was leading a protest march on Islamabad to demand fresh elections. In a video address from his hospital on Friday, he said that he would resume his march on the capital “once I get better.”

Pakistani police have opened a criminal investigation into the shooting, with police documents seen by Reuters alleging that a lone gunman attempted to kill Khan. The former PM alleges that two or more hitmen were involved, however, and has accused Prime Minister Shehbaz Sharif, Interior Minister Rana Sanaullah, and intelligence official Major-General Faisal Nasser of organizing the attempted killing.

Pakistan’s government and military have strongly denied any involvement.

Khan is a former cricketer who served as Pakistan’s prime minister from 2018 until his removal from office through a no-confidence motion this April. During his tenure he built economic and diplomatic relations with Russia and China, and claimed that his removal was orchestrated by the US with the goal of installing a more compliant leader.