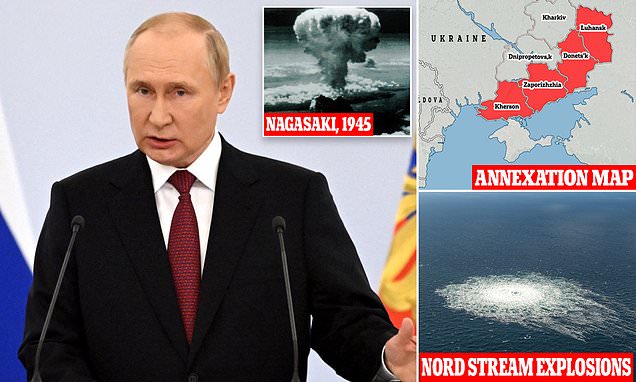 Vladimir Putin accused the United States of creating a nuclear weapons ‘precedent’ by bombing Japan at the end of the second World War in an unhinged speech calling the West ‘satanists’ and accusing ‘Anglo Saxons’ of blowing up the Nord Stream pipelines.

The Russian despot ranted about sex-change operations, claimed America is occupying Germany and Korea and vowed to ‘smash’ the West in the disturbing remarks as he announced the annexation of four regions in Ukraine.

His saber-rattling is another terrifying hint that he is prepared to use nuclear weapons as he vowed to use ‘all available means’ to hold onto Russian-occupied areas of Kherson, Zaporizhzhia, Donetsk and Luhansk.