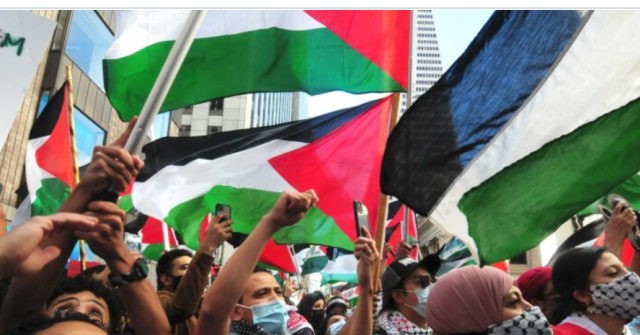 The radical Soros-funded Alliance for Global Justice (AFGJ) is a “fiscal sponsor” of the newly-created Palestine Freedom Fund, a project of the rabid anti-Israel NY4Palestine Coalition which “as a first initiative” has raised nearly $20,000 to fund legal expenses for Palestinian protesters who participated in anti semitic demonstrations that descended into violence against Jews in Midtown Manhattan last week.

The fund is aligned with three supporting radical anti-Israel organizations including the Samidoun Palestinian Prisoner Solidarity Network, which process the donations of the fund.

A statement on the fund’s site states that Palestinian communities “are under attack,” while asking for assistance “to fight criminalization and support targeted youth!”

Our Palestinian communities are under attack. Help us stand together to fight criminalization and support targeted youth! https://t.co/5Y30uRizXk pic.twitter.com/uvunhyU6P5

The fund also notes its aim to fundraise for bail and legal support for Palestinian youth arrested at New York City anti-Israel demonstrations.

According to its site, donations to the Palestine Freedom Fund are processed by the Samidoun Palestinian Prisoner Solidarity Network through their fiscal sponsor, the Soros-backed nonprofit Alliance for Global Justice (AFGJ), which also aids the fund in various ways.

The site also notes that payments made to the fund will be reflected as a donation to the Soros-backed group instead.

“Please note, your card statement will show this as a donation to Alliance for Global Justice,” it reads.

The financial arrangement is crucial for the radical pro-Palestinian Samidoun Palestinian Prisoner Solidarity Network to receive funding after Israel officially designated the group a terrorist organization in February due to its association with the Popular Front for the Liberation of Palestine (PFLP), which is branded a terrorist organization in the U.S., Canada, Israel and the European Union.

According to the Israeli National Bureau for Counter Terror Financing, the Samidoun Palestinian Prisoner Solidarity Network serves as a front for the PFLP terror group abroad and “plays a leading and significant role in the PFLP’s anti-Israel propaganda efforts, fundraising and recruiting activists.”

As a result of its ties to a designated terrorist organization and its funneling of money to it, the Samidoun Palestinian Prisoner Solidarity Network has been banned from all major payment processing servers as of January 2020.

After Donorbox, Paypal. and Plaid helped cut funding to the group, Mastercard, Visa, and American Express all removed the option to give money to the group after extensive evidence was presented of its ties to the PLFP terrorist organization.

Circumvention of sanctions through the Soros-backed AFGJ

The fiscal sponsorship with AFGJ allows the Samidoun Palestinian Prisoner Solidarity Network to circumvent the ban, with money donated to the bail fund via the network being processed through AFGJ.

Incorporated in 1998, AFGJ describes itself as a U.S. grassroots progressive movement which struggles “against US militarism” while aiming “for a better, more beautiful world.”

AFGJ tax records show that progressive billionaire philanthropist George Soros has consistently been one of its largest donors through his Open Society Foundation and The Tides Foundation.

Other notable donors include The Ford Foundation, the Rockefeller Family Fund and The Ben & Jerry Foundation, the charity associated with the ice cream maker, among other far-left foundations.

According to the Capital Research Center, AFGJ provides fiscal sponsorship services that fund groups that do not have 501(c)(3) nonprofit status from the Internal Revenue Service (IRS). As a result, AFGJ serves as a “pass through” entity allowing donors to give to a group that lacks tax-exempt status by donating to AFGJ instead.

Through this mechanism, groups can avoid reporting on their activities to the public and even perform “legally dubious actions” before disappearing with no accountability.

According to its most recent IRS filing, AFGJ’s fiscal sponsorship service’s aim is “to help the progressive movement grow and gain more influence on regional, national, and international levels.”

By providing fiscal sponsorship to groups like the Samidoun Palestinian Prisoner Solidarity Network, AFGJ claims to be in a “unique position” to “witness and support this movement for liberation,” adding, “We are inspired by their creative responses to protect our people and challenge the structures of injustice.”

AFGJ states it is “proud” of its role though “it doesn’t come without its risks,” noting it has been accused of “being anti-Semitic for sponsoring Palestinian rights organizing.”

It also says it is “willing and able to fight” for its fiscally sponsored programs.

“AFGJ is here to help ensure that the movers and shakers organizing to build a better tomorrow have the structure and tools they need to act,” the group writes.

The radical NY4Palestine coalition, which has been leading many of the New York City protests that have resulted in violence targeting Jews, includes two other groups: Al-Awda: The Palestinian Right to Return Coalition, which “supports the struggle for the liberation of Palestine” against the “racism and discrimination inherent in Zionist ideology,” and “Within Our Lifetime,” which describes itself as “anti-Zionists” who support the right of Palestinians “to resist the zionist occupation by any means necessary [emphasis added].”

“The liberation of Palestine requires the abolition of Zionism,” its site adds.

Since its establishment, Al-Awda has regularly hosted convicted terrorists at its events, while senior members of the group have expressed support for violence against Israelis and have been accused of antisemitism on social media.

Al-Awda has also been banned from payment services.

On Saturday, the coalition groups marched through the streets of Queens, where organizers led various anti-Zionist chants.

Queens rally for Palestine is under way. According to scanners, NYPD's Mobile Field Force and the SRG may be responding. https://t.co/hMMYp7DRxV

Last week, nearly two dozen were arrested after pro-Palestinian demonstrators attacked a pro-Israel counter-protest in Times Square. In one clip, a female bystander is burned when demonstrators set off fireworks.

After pro-Palestinian thugs savagely beat a Jewish man, one of the assailants involved — 23-year-old Wasseem Awawdeh — reportedly told prosecutors, “If I could do it again, I would do it again. I have no problem doing it again.”

During the attack, Awawdeh allegedly told the Jewish victim, “F*** Israel, Hamas is going to kill all of you,” and called him a “dirty Jew.”

On Monday, The Algemeiner requested comment from the three groups backing the Palestine Freedom Fund to clarify what the tens of thousands raised online would go toward, though no response had been received.

The radical NY4Palestine Coalition plans to hold a large demonstration on Saturday in Washington, D.C., at the Lincoln Memorial along with over 100 other organizations.

“As the call to the rally notes: ‘We need to go big and bold right now for Palestinian liberation now that a ceasefire has gone into effect. No return to the status quo. It is time for Israeli settler-colonialism, ethnic cleansing, apartheid, military occupation, and blockade to be dismantled now!’ We’re also endorsing the campaign to #SanctionIsrael that will be highlighted at the March!” the coalition announced.