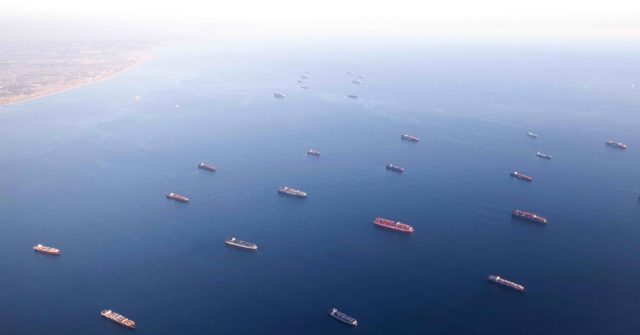 By JOEL B. POLLAK

LOS ANGELES, California — A record-breaking 100 ships were reported to be anchored off the Port of Los Angeles and the Port of Long Beach as of Tuesday, as the cargo crisis continued, despite the Biden administration’s claims of progress.

The major backlog of container ships at the ports of Los Angeles and Long Beach is the worst its ever been, with 100 ships waiting to enter and unload as of Tuesday.

That number breaks last month’s record of 97 vessels. To put it into context, there would typically be about 17 ships at anchor in pre-pandemic times. The two Southern California ports account for 40% of all shipping containers entering the U.S.

The backlog is only going to get worse with another 45 ships expected to arrive at the ports by Thursday.

As Breitbart News reported Monday, the growing number of ships is visible for miles around in the Los Angeles area. 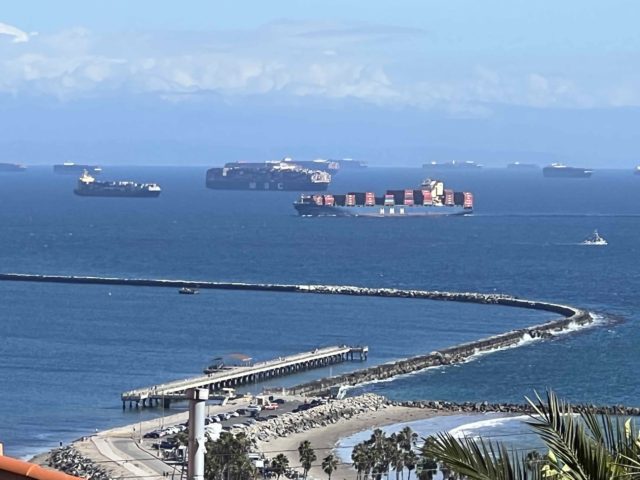 A ship approaches the Port of Los Angeles, with dozens of other ships anchored in the background, October 18, 2021 (Joel Pollak / Breitbart News)

The traffic jam has seen the number of ships growing dramatically in recent weeks. The Biden administration cites economic growth and rising consumer demand, saying the cargo crisis is a good sign of progress, despite the supply chain disruptions it has caused.

However, there are other reasons for the cargo crunch, including a shortage of dock workers, a lack of truckers, limited capacity for containers at the ports, and the fact that the ports were not (until recently) operating at nights and on weekends.

On Tuesday, White House press secretary Jen Psaki claimed that there had been “serious progress” at the ports, noting that the Port of Los Angeles had already halved the “amount of cargo that is sitting on the docks for thirteen days or longer.”

Published in Biden, Crime, Health News, Opinion and US News